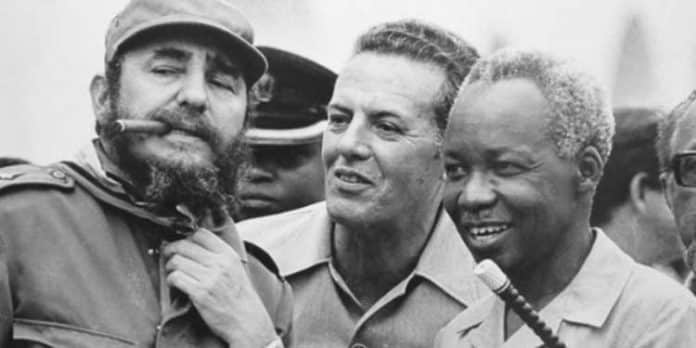 The Non Aligned Movement was formed 35 years ago during the Cold War between the countries of the Eastern and Western camps. They were established, for the most part, by countries that gained independence from colonial rule that opposed the notion that they should belong to, or at least support, one of those camps – that they had to ‘unite’ in one way or another. They were determined to say that they

had their own identity, and that they had the right to make their own decisions based on their own nationalistic views. In creating the Non Aligned Movement they were refusing to be shadows of other nations or institutions of other Forces.

But in today’s world it is impossible for weak nations to stand alone against the pressures of powers from rich countries. Only in unity can they claim their identity. To be ‘me’ they had to be ‘us’. They were united in building solidarity. Only in solidarity could they defend their identity as independent nations and members of the global community.

The Non Aligned Movement never became a particular camp. They were not designed to be a camp competing with the East or the West. It was an international group with a common interest in their independence. It was an international group engaged in Peace within their country, and therefore Peace in the world. Every participant knew that their nation was in danger when peace was broken everywhere. It knew, exactly, that the war between the Camps it will be catastrophic in itself. The Non Aligned Movement never ceased to call for world peace; and to the best of its ability to help promote Peace in the world.

The Cold War is over. There is now one great power in the world, not two. The constant danger of the Third World War, and the possibility of using nuclear weapons, is no longer with us. But this does not mean that there is peace everywhere in the world. It never existed; and does not exist now.

Nor does the end of the Cold War mean that weak, poor, or small countries can rest safely in their freedom. The right to decide their policies, internationally and nationally is still under pressure from the Powers of rich countries. The UN Charter recognizes the equal freedom of each nation. Every country in the UN Assembly has a single vote. But none of us would doubt that the powerful are interested in how the vote is used. Every poor and weak country knows that political courage may be needed if the vote is to be used in a way that does not please the powerful nations over something that is taken seriously.

It is now important for Southern countries to be able to say “We are here” in terms of the economy. It is only through solidarity that any of us can defend our economy as different nations, and our economy as part of the global economy.

The issues of the global economy are very controversial. While the Uruguay Round was under discussion in Geneva, at the same time there were 14 different Committees conducting technical discussions. Very few Southern states had staff in Geneva missions who were able to even attend each committee. And few had a full understanding of the issues of great importance to our development choices that were hidden within the technical arguments. The treaty signed in Marrakesh – almost all of us – shows all the signs of being a treaty between developed and developing nations – between the North and the South. Between different sides.

What lies ahead for the global community in the near future is another proposal from the North – for a new International Investment Agreement. It could reduce the power of developing countries to determine their own direction of development. The ‘I’ of a poor or weak country can only be represented through ‘us’. Our different identities depend on our solidarity.

Mr. Chairperson, The South Center is a small – very small – body created by other Southern countries to serve all Southern countries. Its purpose is to assist in providing an up-to-date analysis of issues related to the development of our people and our nations. It needs to be strengthened so that it can work faster and more often on very important issues. Its performance includes prioritizing the issues at stake in in the South in certain negotiations, and in proposing decisions that, taken collectively, can reduce the vulnerability of the weak and increase the strength of the weak.

The South Center needs support from Southern countries in order to help deliver their ‘us’ declaration more effectively in practice. Solidarity in the South was important 35 years ago. It is also important now. Perhaps the most important thing now.

Congratulations to the Non Aligned Movement on this occasion. I congratulate all its members for their solidarity in the Movement. And I pray that together we can make our solidarity more effective for the 21st Century.

Conference of Food and Agriculture Organization

Inaugural Speech of the South Commission

Developing Countries and the World of Tomorrow