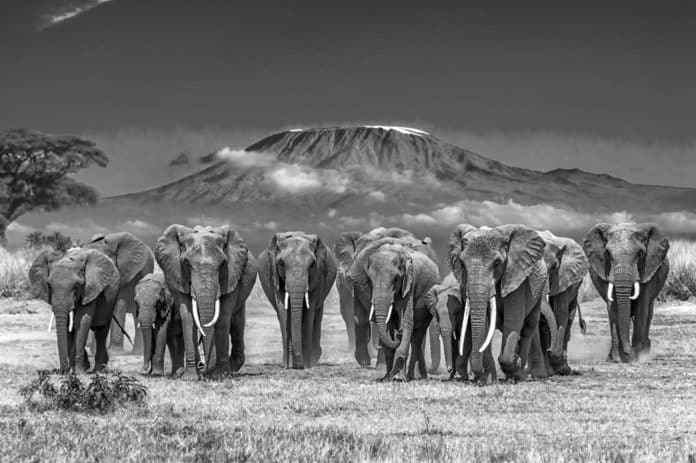 Mount Kilimanjaro National Park covers 1,688 square kilometers and is home to a wide variety of the Kilimanjaro wildlife (652 square miles). The area was named a forest reserve in 1921, a national park in 1973, and in 1987 a UNESCO World Heritage Site; all three designations and protection allowed animals to tolerate human encroachment in the Kilimanjaro area.

While climbing Kilimanjaro, climbers may encounter a variety of natural environments, including heathlands, rainforest, alpine desert, and others. The resources needed to maintain life, such as plants, insects, and water supplies, diminish as the elevation rises. Species density decreases as you near the summit.

Montane forest belts make up the bulk of the park; this region has a lot of trees. There are 154 known mammal species on the mountain, including seven primate species and many bird species. Large mammals like elephants, buffalo, and giraffes and smaller and more unusual critters like porcupines and honey badgers have been spotted in the wild on a few occasions. But these animals tend to stay away from people and prefer to be hidden in the vast rainforest.

While on Mount Kilimanjaro, Be Sure to Look Out for These Animals:

At Big Forest Camp on Kilimanjaro, you can see a Blue Monkey, sometimes called a Diademed Monkey, at the first campground on the Lemosho Route.

The representation is misleading, as the primates don’t appear to be specifically blue. The body is grayish-olive in color, with white and black patches all over it for added interest. There are some yellow or whiter patches on the brow, but the overall tone of their face is darker. The color of their eyes is a deep reddish-brown.

These members of the Mount Kilimanjaro wildlife depend on tall trees for food like leaves, twigs, flowers, and insects while also sheltering on them.

The white band on the back of the neck of this raven lends the bird its common name.

Ravens in general and this particular subspecies are very clever creatures in particular. Some believe that ravens are more intelligent than a seven-year-old child. Some of their skills are thinking abstractly, handling challenging problems, and completing collaborative judgments. As shown in the video below, it is possible to teach ravens to speak like humans.

These amazing Mt Kilimanjaro wildlife birds are omnivorous; their food sources are grains, fruits, carrion, insects, and small mammals and reptiles. You’re almost sure to see these large birds flapping their wings and squawking as they search for food at kilimanjaro golf and wildlife estate. It’s terrible to leave your daypack unattended at the wildlife estate if you don’t want these naughty birds to break in and take your snacks.

The Greek word “kolobos,” meaning “mutilated or injured,” is the root of the English word “Colobus.” This monkey’s lack of thumbs is the source of this unfavorable perception. This adaption was a result of its tree-dwelling habitat. Swinging through the forest canopy is easier if you have fingers that resemble hooks.

Remarkable color contrast can be seen in the Colobus Monkey. They are born white, but they develop their distinctive black-and-white appearance as they grow older. They are born entirely white. Their two-foot-long fluffy whitetails are what sets them apart. These monkeys can commonly be found around the trailheads of Kilimanjaro and in the surrounding forests.

Colobus monkeys, like Blue monkeys, prefer to live on the trees and rarely come down to the ground, unlike their cousins. Fruit, flowers, and vegetables are the bulk of their diet. The three-chambered stomachs of Colobus Monkeys, which resemble ruminants, aid in the digestion of leaves.

Rats can usually be found close to human settlements. The appearance of these mice resembles that of chipmunks, and they are slightly larger than house mice. They depict four black stripes on their back.

These Kilimanjaro wildlife mice are more active in the early morning hours and very late afternoons than other mice, and they sleep throughout the daytime. They are also solitary foragers, despite their social structure.

Because of the quantity of food, the Four Striped Mouse prefers to reside in Kilimanjaro campsites and huts. They eat a wide variety of plants, insects, seeds, and human garbage.

Among the many names these bush infants are known are nagapies, galagos, and the affectionate moniker “little night monkeys.” Their human-baby-like midnight cries have earned them the nickname “baby.”

Large, wide eyes and a brownish-grey to light brown coat characterize these nocturnal Kilimanjaro wildlife creatures. They’re nimble and can cover great distances between trees in a single bound.

They catch and eat grasshoppers and moths on the ground or air. They’ll also eat insects, tree gums, and fruits.

The Bush Baby hides out in tree hollows. As a result of their nocturnal activities and extensive range, they are challenging to monitor.

The majority of the world’s chameleons can be found in Africa. Their skin color can vary in response to light, mood, humidity, or temperature, making them unique among animals.

The chameleon’s eyes move independently to see in two directions at once. Because of their incredible vision and tongue-launching skill, they can hit and trap insects with pinpoint accuracy.

The three-horned Jackson’s chameleon and the smaller two-horned Dwarf Fischer’s chameleon can be found on Kilimanjaro.

Want to get up close and personal with these Kilimanjaro wildlife creatures?

Keep an eye out for these adorable critters while you’re on your Tanzanian adventure.