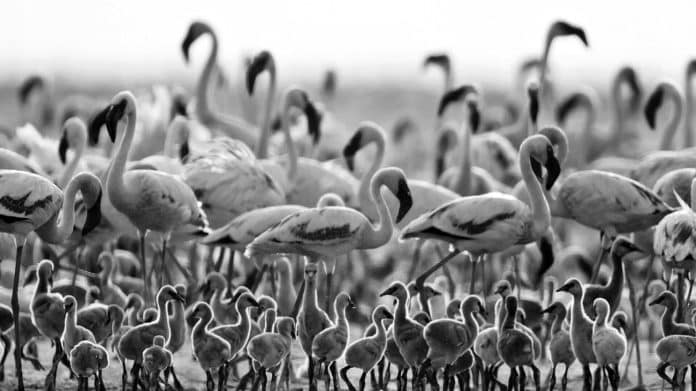 Lake Natron Flamingos thrive in these salty waters, but the waters are deadly to humans.

An enormous lake surrounded by the calcified bones of animals drowned in the salty water, burning sparkly red and running under Gregory Rift mountain in Tanzania. Sodium carbonate deposits in the water (a chemical initially employed in Egyptian mummification) caused swallows, bats, and other unfortunate animals in their watery tombs, preserving them in their natural state. The population of flamingo in lake Natron, makes the waterbody a home to about 75 percent of the planet’s lesser flamingo population, making things even more mysterious.

The Lake Natron flamingo season is usually from the month of August all the way to the month of October. This is the time the flamingos lay eggs, and in the month of November they hatch them.

The water has a pH between 9 and 10.5. It can calcify remnants, erase ink from printed things, and burn the skin and eyes of animals not accustomed to the conditions. As water evaporates and salinity rises during the dry season, cyanobacteria photosynthesize vivid red and orange pigments; the lake appears blue before this process occurs during the wet season.

How Do Flamingos Survive in Lake Natron?

Lake Natron Flamingos are the only animals to thrive in this environment rife with mortality. When the conditions are right, the lake is covered in pink birds, who pause in their flight to breed every three to four years or so. The salt crystal islands that form when water levels are perfect attract more than three-quarters of the globe’s lesser flamingos from other Rift Valley salty lakes. The caustic moat protects the baby birds from predators when the water level is suitable.

According to a limnologist at the University of Leicester, Professor David Harper, “Natron Lake Flamingo population has developed incredibly leathery skin on their legs to allow them to thrive in saline water.” When a person’s legs remain exposed for an extended period, they will die. This year, the Lake Natron flamingo population has been unable to nest due to rising water levels.

Hot springs running into the lake have created lower salinity lagoons on the lake’s outskirts, which some fish have found somewhat suitable for a lake vacation. Tilapia species can be found in the area on a seasonal basis. According to Harper, when the lake is low, and the lagoons threaten to separate, fish seek protection in these streams that extend into the poisonous lagoons. Fishes are forced to seek refuge in their sanctuary streams or perish when the lake recedes and separates until all the lagoons join together. No species of fish can survive Lake Natron’s originally unsaturated state.

Conservation Efforts of the Lake Natron

However, the survival of the unique Lake Natron Flamingos is in jeopardy. The Tanzanian government has revived plans to mine the lake for soda ash, which is used to produce detergents, chemicals, and glass. Conservationists are concerned that the proposed project, which is more than 40 miles away, may disrupt the natural water flow and nesting areas. Even in a lake that destroys almost everything it comes into contact with, life persists for the time being.