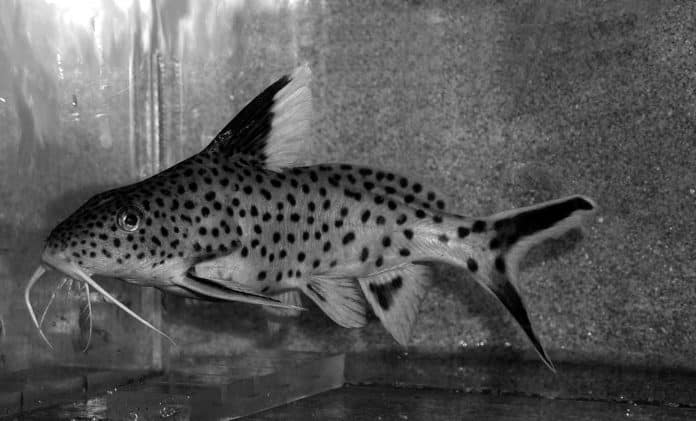 Synodontis dhonti is an upside down fish specie found in the Democratic Republic of the Congo but its habitat is only known to be Lake Tanganyika. The first person to document this fish and study it was the English-Belgian veterinarian George Albert Boulenger in 1917, using only one sample picked up from Lake Tanganyika on the shores of Kilewa, which is now called the Democratic Republic of Congo. The name of this fish is coined after M.G. Dhont-De Bie, who was present with the collector, Dr L Stappers, on his exploration. In some cases, the extinct species Synodontis irsacae was believed to be the offspring of Synodontis dhonti and both were considered to be similar species, but later studies have shown differences in these two species and are for second time being re-identified as different species.

Description of the Synodontis Dhonti Specie

Just as all Synodontis species, Synodontis dhonti has a strong skeletal head that extends to the first bone of the fin on the dorsal. The head measures approximately 1/3 of the normal length of the fish. The head has a thin, protruding bone called the ‘humeral process’. The shape and dimensions of this humeral process are important features that helps in recognizing this species. For Synodontis dhonti, this bone is thin, deep, and not smooth in appearance. Its upper edge is round and the end is blunt. It’s length is approximately ½ its head’s height. The length of the eye diameter is about 1/9 of the head’s length.

Synodontis dhonti skin has a large portion of many small folds that are vertical. The exact role of these skin folds is unknown, but it is a feature of the Syndontis species found in Lake Tanganyika. Outer granular papilla exists on the skin of the fish.

The frontal tips of the dorsal and pectoral fins the Syndontis species are toughened into spines that are stiff. The Synodontis dhonti’s dorsal fin length is roughly 7/10 of the length of its head, the entire dorsal is straight, smooth in front but carved like a saw in the back, and ends with short black fibers. The rest of the back fins are made up of branches of seven black rays. The pectoral fins spine is slightly curved, about the length of the spine of the dorsal fin, which is like a saw on the back. The fins on the side of the ribs end with a short black ribbon. The remaining pectoral fins are made up of rays of eight branches. The adipose fin have no rays and have a shape that curves outwards. The pelvic has one uniform branch and six branches of rays. The front part of the pelvic is parallel to the end of the spinal cord vertically.

The fish’s mouth looks down and has broad lips that consist of papilla. All Syndontis species have a premaxilliary toothpad structure, which is found at the beginning of the upper jaw. This toothpad structure has several short, dental rows like a chisel. In some species, the same structure is composed of large, multi-layered sides in a large collection. For other Sydhontis species, this part of the teeth is divided into two distinct parts, separating these teeth from thin skin. The toothpad is an aspect of this fish that is used in distinguishing it with other different Syndhontis species. In Synodontis dhonti, the toothpad is continuous with no interruption. In the lower jaw also known as mandible, Syndhonti’s teeth are held in place, to a loose feature that resembles stalk described as having an “s” or “hooking” pattern. The number of mandible teeth is also another feature that helps to separate this fish with other species; Synodontis dhonti, has 22 teeth in the mouth, arranged in a single column.

Some Synodhontis species have one or more openings called ‘axilliary pore’. It is found in the rib cage under the ‘humeral process’ and before the spine of the pectoral fin. The exact function of axilliary pore has not yet been determined yet by scientists, although its presence has been observed in other species of catfish. Fish in the ‘Acrochordonichthys’ group have been shown to produce something like a toxic mucus from this hole, but there is no scientific agreement to show the use of this pore or the mucus itself. Synodontis dhonti close to the bottom of its ‘humeral process’ features a big axilliary pore.

The studied fish related to this specie has been stored in alcohol for nearly a century, as a result the original color of these preserved fish has disappeared. However, most Synodhontis species of Lake Tanganyika have a noticeable features that includes black triangles under the rays of their fins, present in Synodontis dhonti, with black spots that may or may not go all the way up to the abdomen. The barbels are often white but can have coloration that spread near their bottom. Body colors have a wide range among these fish. The fins’ rays are black.

The average height of the studied Synodontis dhonti fish is 32.5 centimeters (12.8 inches) and 39.5 centimeters (15.6 inches). In general in the Synodontis species, females are usually a bit bigger in size compared to males of the same age.

In terms of the natural habitat, this specie is found in Lake Tanganyika, which has a temperature that spans from 23 to 26 ° S (73 to 79 ° F), and with a mean pH of 8.5-9, and a d ‘of 4- 15. The Synodhontis species of lake Tanganyika prefer part of the landscape of rocky beaches, also sandy and bottom areas that are covered with shells. The reproduction dynamics of Synodhontis is unknown, except the data collected from cases of harvesting gravid females eggs. Breeding occurs mainly during the rainy season between July and October, and the fish swim in pairs together during this period. In general, Synodhontis species eat leaves and meat, insect larvae, algae, ‘gastropods’, bivalves ’, sponges, shrimp, and eggs of other fish. Growth is great in the first year, then it decreases as the fish get older.