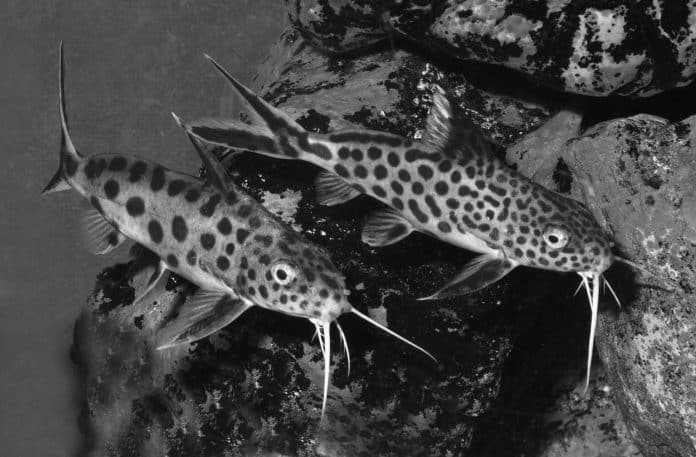 Synodontis Grandiops is a catfish species that is endangered, whose habitat is known to be only in the Democratic Republic of Congo, Burundi, and Tanzania, sides of Lake Tanganyika. It was first known to life by Jeremy John Wright and Lawrence M. Page in 2006, from samples collected in many places, along Lake Tanganyika. The name of the species is a Latin combination, with the word “grandi” which means “large”, and the Greek “ops”, which means eye, reference from this fish large eyes.

The Head and Surroundings

The fish has three pairs of barbels. Found on the upper jaw of the fish are maxillary barbels and mandibular barbels pairs at the bottom

jaw. Maxillary Barbel has no membranes near the stem and is straight without any branches. It extends at least to the stem of the pectoral fins, a large part of the head length. The outer pair of mandibular barbels extends almost to where the pectoral girdle is, about 1⁄2 of the head length, and has four to five branches without other secondary branches. The inner pair of mandibular barbels is about 1/2 to 2⁄3 in length as the outer pair, about 1⁄4 to 1⁄3 of the head length, with a pair of four to five branches without other secondary branches.

Synodontis Grandiops skin has a vast number of small sized folds on the skin. The exact purpose of the skin folds is unknown, but it is characteristic of Syndontis species found only in Lake Tanganyika. External papilla cells are absent.

The sharp front of the dorsal fins and pectoral fins for Syntontis species become hard and eventually sharp thorns. In Synodontis Grandiops, the thorn of the dorsal fin is long, about 7/10 of the head’s length, is relatively straight, has up to three small serrations at the front and many small serrations at the back, and ends with white filaments that are short. The remaining part of the pectoral fins, are made up of seven branches of rays. The pelvic gland is vertical in front of the adipose gland. The anal fin has three to four branches without branches and six to eight branches of rays; it stays upright with adipose tissue. The tail, or caudal fin, is divided into pointed areas, and has seven rays on the upper lobe, while lower lobe has eight rays.

The mouth of the fish is facing downward with very large lips that have a papilla. All Syndontis members have premaxillary toothpad structure, found at the upper jaw forefront. This structure consists of several rows of short, chisel-shaped teeth. For some species, this toothpad is made up of a large patch with several layers on a large group. On various Syndontis species, the toothpad is halved into two specific groups, separated by skin band that is very thin and divides the toothpad. This behavior is used as a way to distinguish among the various species, but similar species of Syndontis. In Synodontis Grandiops, the toothpad is not interrupted, or continues without a stop. On the lower jaw, or mandible, Syndontis teeth are attached to flexible structures, such as stems and are described as “s-shaped” or “trapped”. The mandible’s teeth number is used to distinguish the species, in Synodontis Grandiops, the mandible has 17-26 teeth, all located in a single row.

Various species of Synodontis are featured with opening series known as axillary pore found on the body sides under the humeral process and just close to the pectoral fins bone. The exact function of opening is unknown to scientists, although its presence has been observed in seven other species of catfish in general. Genus Acrochordonichthys fish have been illustrated to produce mucus that is toxic from their axillary pore, but there is no agreement or conclusion scientific wise in terms of the exact purpose of the mucus that is being extracted or vents. Synodontis Grandiops have a large, black axillary pore under the humeral process.

The maximum height of the known specimens is 11 centimeters (4.3 inches) and the total length of 15 centimeters (5.9 inches). In general in Synodontis species, females tend to be a bit bigger than males of similar age.

In the wild, these species are found only on Lake Tanganyika, where the temperature is 23 to 26 ° C (73 to 79 ° F), with a pH of about 8.5 – 9, and a dH of 4-15. Synodontis species in the lake live mainly in rocky areas, as well as in sandy and areas that are covered with shells. The reproductive characteristics of many Synodontis species are unknown, with an exception of a few cases of egg counting from a females who were expecting to breed. Spawning can occur during the flood season between July and October, whereby pairs of Synodontis Grandiops usually swim together during hatching. In general, Synodontis species are omnivores, feeding on insect larvae, algae, snails, valves, sponges, crabs, and eggs of other fish. Growth rate is rapid in the first year, and then decreases as the fish becomes older.