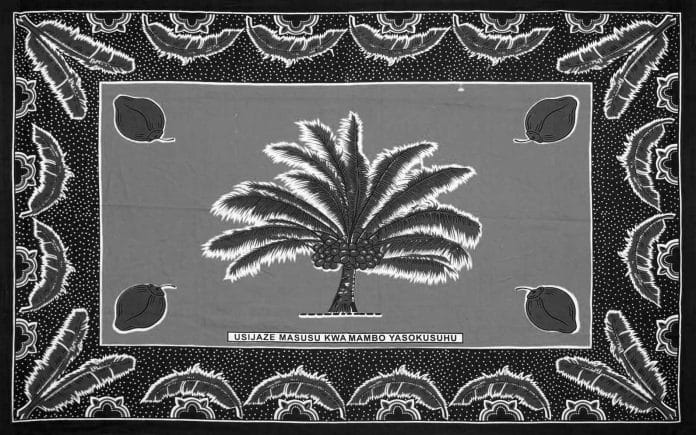 The kanga is a bright garment worn by men and women in the region of the African Great Lakes. It is similar to kitenge but quite lighter. The kanga is a 1.5m by 1m fragment of printed cotton cloth with a line on all four borders (pindo in Swahili) and a center area (mji) different from the borders in design. They’re often sold in pairs and can be trimmed and sewn together to make a set.

Unlike kitenge, a more formal fabric for good apparel, kanga can be used as an apron, skirt, towel, headwrap, potholder, etc.

On the eastern coast of Africa, the kanga is a culturally significant gift that is frequently given for birthdays and other special events. In Tanzania, they are also given to grieving families as part of a collection (or michango); in which many community members contribute a little amount of money to help the family cope with their loss. Kangas resemble the traditional men’s garments Kikoy and Kishutu.

One of the first known patterns is called the Kishutu. It’s possibly named after a Tanzanian village. They are given to newlyweds by healers to ward off evil spirits. They are also presented as part of the bride’s dowries. They do not necessarily include a proverb because of their ritual role.

The first kanga patterns featured speckles or small dots that resembled the guinea hen’s plumage, also known as ‘kanga’ in Swahili language. Contrary to widespread assumption, the term ‘kanga’ does not come from a Swahili verb meaning “to close.”

Since the 19th century, women in East Africa have worn kangas as a traditional form of attire.

According to certain reports, it was made from an unbleached cotton material imported from the United States. In Zanzibar, the fabric was called merikani.

Merikani is a Swahili noun gotten from the adjective American (signifying the place it was created). It was wrapped around the waist of male slaves and under the armpits of female slaves. Slave women occasionally dyed the cloth dark blue or black with locally acquired indigo to make it more feminine.

Kaniki was the name given to the dyed merikani.

Kaniki was reviled because of its ties to slavery. Ex-slave women who wanted to integrate into Swahili culture began to embellish their merikani clothing.

They accomplished this by employing one of three techniques: hand painting, resist dying or block printing. Kangas began to be worn for self-empowerment and to show that the wearer had personal wealth after slavery was abolished in 1897.

According to other historians, the origin is in the lencos (square kerchiefs) imported from Arabia and India by Portuguese traders. Stylish women in Mombasa and Zanzibar began to utilize them by stitching six kerchiefs together in a 3X2 pattern to make one huge rectangular wrap. They quickly grew popular throughout the entire coastal region, eventually spreading to the regions of the Great Lake.

In certain places, they are still referred to as lesos or lessos, from the Portuguese name.

They were mostly created and printed in the Far East, India, and Europe until the mid-20th century. Since the fifties, Kangas have been printed in Kenya, Tanzania and several African countries.

Two of the leading producers in Kenya are Thika Cloth Mills Ltd and Rivatex, while in Tanzania, MeTL Group Textile Company located in Morogoro is a major manufacturer.

Proverbs, aphorisms, sayings and slogans were added to kangas in the early 1900s. Kaderdina Hajee Essak, commonly known as “Abdulla,” a Mombasa trader, began to use the following sign to distinguish his kangas: ‘K.H.E. – Mali ya Abdulla.’ He also added a Swahili proverb to this sign. These proverbs were first printed in Arabic script, then in Roman letters. In the eastern section of the region, phrases in Kiswahili are customary, while both Kiswahili and Lingala phrases are common in the middle areas.

They are always rectangular and there’s usually a border on all four sides.

Kangas frequently have a core symbol.

The majority of current kangas have a phrase on them, usually in Kiswahili.

Kangas can be worn in a variety of ways. One traditional technique to wear the kanga is to wrap one piece around the waist and wrap the other around the head and shoulders as a shawl. Kangas can also be used to carry babies.

Comorian or Arabic are less widely used to write the message.

Other countries that create Kangas write the Kanga names/messages in their native tongues: in Malagasy Republic (Madagascar), where kangas are called lambas, they feature traditional Malagasy proverbs (ohabolana); also, they are manufactured in Malawi and Zambia. This message is known as the kanga’s jina (name). Proverbs and riddles are frequently used to convey messages.

When giving a kanga as a gift, it’s important to keep the adage in mind, as it can be offensive. One of these is occasionally presented as a wedding gift to signify one’s belief that the couple should not be married! The majority of the messages, on the other hand, are filled with good wishes and warm thoughts.

Here are a few proverbs:

Quick Overview of Kitenge and Uses

A Quick Overview of the Kanzu Dress