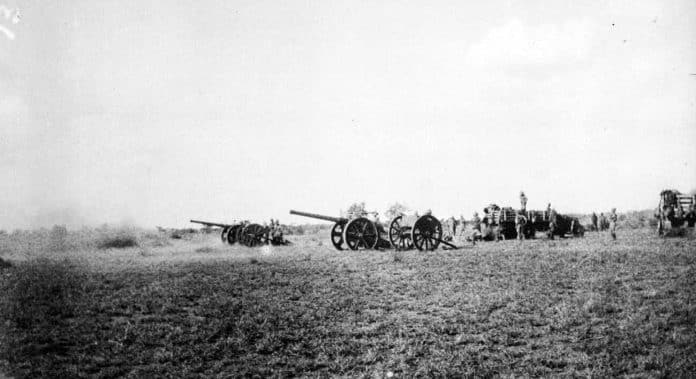 The battle of Salaita Hill (known as Battle of Oldoboro Hill in German) was the 1st major battle of the Campaign of WW I in East Africa, involving British, Indian, South African, and Rhodesian soldiers. On 12 February 1916, the combat took place as part of General Jan Smuts’ three-pronged invasion into German East Africa (GEA). Smuts had been granted permission to be the overall commander of the Allied forces found in the area.

Background of the Battle of Salaita Hill

Salaita was a vital lookout station near Taveta, a border town in modern Kenya. Its closeness to the border of GEA, as well as the notion that it was only protected by a detachment of only 300 troops without artillery, made it an appealing first target for Smuts’ onslaught.

The 2nd Division of South Africa, under Wilfrid Malleson, the Brigadier General, led the push into GEA. Prior to the commencement of WW I, Malleson, who had little experience in battle, had worked as staff to the Kitchener of the British Field Marshal and as part of a British military expedition to Afghanistan.

The 2nd Infantry Brigade from South Africa under Brigadier General Beves and the 1st Brigade from East Africa were picked to fight the battle of Salaita Hill. The army numbered 6,000 troops, including an associated Indian artillery brigade. Salaita, despite British knowledge suggesting otherwise, was heavily guarded by around 1,300 soldiers under the command of Major Georg Kraut, the local commander. Furthermore, Malleson was unaware that there were 6 Schutztruppe field troops in the vicinity, with about 1,000 soldiers.

Events That Unfolded During the Battle of Salatia Hill

In the morning hours of February 12th, the Allied attack began with a preparatory bombardment of the positions of the Germans using 4-inch guns that were salvaged from HMS Pegasus. Due to inaccurate intelligence, the bombardment was directed towards the secondary trenches of the Germans at the crest of Salaita Hill rather than their front line, further downslope. As a result, it informed the defenders of the impending onslaught without interfering with their capacity to protect themselves. German artillery started shooting 2 hours into the attack when Malleson’s forces were two thousand meters (6,600 feet) from Salaita.

The 7th Infantry Regiment from South Africa (Lieutenant Colonel Freeth J.C) led the assault, while the sixth (Lt. Colonel G. M. J. Molyneux) and 5th (Lt. Col. J. J. Byron) Regiments held the right and left flanks, respectively. The soldiers were deployed in a hazy skirmish formation. The South African battalions succeeded in breaking the German line but were eventually stopped and forced to withdraw due to machine-gun casualties. They were attacked and outflanked by a relief force of the Germans led by Captain Hauptmann Schultz from the adjacent Taveta town as they withdrew to their initial positions. Following this Battle of Salaita Hill, the troops headed north towards the Serengeti, having lost 172 men, 138 of whom were South Africans.

Aftermath of the Battle of Salaita Hill

Concerns arose about racial tensions between the 6th Infantry Regiment from South Africa and the 130th Baluchis. The unit from South Africa was apprehensive about serving with its Indian counterparts, referring to them as “coolies.” When German askaris forced the South Africans to flee, the Baluchis stood firm. They later returned to them a machine gun that had been abandoned by the white soldiers, along with a note that read: “The 130th Baluchis sends its greetings. We respectfully request that you stop referring to our men as coolies.”

The commander of the German troops in GEA, General Paul von Lettow-Vorbeck, increased his units around the Kilimanjaro area due to the Battle of Salaita Hill. About half of his forces (5,200 askaris and 800 Germans) were eventually re-dispatched to the area.