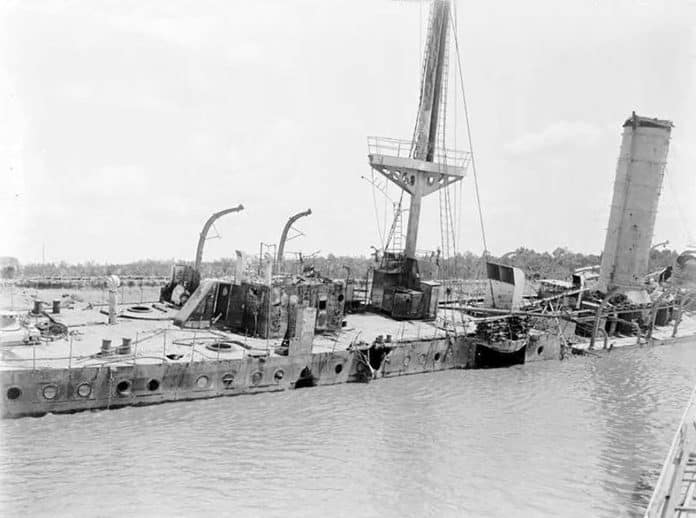 During World War I, the Battle of Rufiji Delta occurred in German East Africa (present-day Tanzania) between the SMS Königsberg light cruiser of the German navy and a formidable fleet of British vessels from October 1914 to July 1915. The combat consisted of a series of efforts to down the blockaded German SMS Königsberg.

The SMS Königsberg was the most formidable German ship in the Indian Ocean in 1914. Königsberg and Somali, her supply vessel, hid in the Rufiji River delta following an engine breakdown after it destroyed the British protected HMS Pegasus. Königsberg’s faulty machinery was taken to Dar es Salaam overland for repair. In late October, the British warship HMS Chatham stumbled upon Königsberg in the Rufiji delta. HMS Weymouth and Dartmouth, two more British cruisers, arrived on the scene on November 5th and blockaded the SMS Königsberg in the delta. Chatham started firing at long range and hit Somali, setting it on fire in early November, but she missed Königsberg, which rapidly retreated upstream. The British had more powerful ships than Königsberg’s; however, they could not get them through the delta. Königsberg’s crew disguised their ship to resemble the trees that surrounded the delta.

The British attempted to sink Königsberg numerous times, including one that involved slipping a torpedo boat in shallow-draught (with escorts) to sail within range, which was easily thwarted by the Germans in the delta. The British sunk a blockship, the Newbridge, across one of the mouths of the delta to prevent Königsberg from escaping. Nevertheless, the British soon determined that she might still escape via one of the other channels of the delta. Dummy mines were planted in some of these options but were deemed ineffective deterrents. Cutler, a civilian pilot, was recruited to bring in the Curtiss seaplane he flew for reconnaissance; his seaplane was gunned down, but the elusive ship was confirmed to be present. Two seaplanes of the Royal Naval Air Service Sopwith were called up to scout and possibly bomb the ship at the Battle of Rufiji Delta but they quickly disintegrated in those tropical conditions. Three short seaplanes did better, capturing photos of the cruiser before being grounded due to German fire and the glue-melting heat of the tropics.

Attempts to sink the cruiser with the 12-inch (300 millimetre) guns lifted from the ancient warship HMS Goliath were unsuccessful, once again due to the shallow waters preventing the warship from approaching within range.

By 1915 March, however, food supplies on board the Königsberg were running low, and several members of the crew had succumbed to malaria as well as other tropical ailments. The sailors’ morale sank as they were isolated from the rest of the world. The position was slightly improved, however, when a plan to replenish the cruiser and accord her a chance to come home was devised. The captured merchant ship of the British Rubens had to change its name to Kronborg and be fitted with papers, the Danish flag, and a German crew chosen for their ability to communicate in Danish. Coal, ammunition, field guns, freshwater, and other supplies were then put into the ship. The HMS Hyacinth intercepted her after she infiltrated the East African waters successfully, which pursued her up to Manza Bay. The crew set fire to the entrapped ship and then left. Most of its cargo was eventually salvaged by the Germans and brought to Königsberg, where they later employed it in the ground campaign.

The HMS Serven and Mersey were dragged from Malta to River Rufiji via the Red Sea, arriving in the delta in 1915 June. They operated the gauntlet with non-important things removed, additional armour put on, and a complete bombardment from the remainder of the vessels. They participated in a long-range Battle of Rufiji Delta with Königsberg, which was assisted by shore-based spotters situated at Mafia Island to look for falling shells, and by a team of four land aeroplanes, two Henry Farm and two Caudrons. Despite the fact that Mersey had been struck and the two monitors had not been able to score on their 1st day, they returned on July 11. At last, their 6-inch (150 millimetre) guns destroyed Königsberg’s weaponry and reduced it to shambles. Looff instructed her to be scuttled by a torpedo around 14:00. Following the fight, the British became the Indian Ocean’s unrivalled dominant naval force.

Aftermath of the Battle of Rufiji Delta

The 188 crew members that remained buried 33 Germans the following day. A plaque with the words “Beim Untergang S.M.S. Königsberg am 11.7.15 gefallen…” meaning (“Killed in battle when SMS Königsberg was sunk on July 11 1915…” was put up, together with a list of the deceased. The ten 4.1-inch (105 mm) quick-firing guns recovered from Königsberg were installed on makeshift ground carriages and deployed as formidable field guns with remarkable effectiveness in the German guerilla war against their allies in East Africa. The cannons were utilized in Dar es Salaam as a port fortification, with one remounted on the Graf von Götzen, a passenger ship. It was not until October of 1917 that the last gun was knocked out. The rest of Königsberg’s crew joined the ground forces commanded by Lettow-Vorbeck.

Three of the 105-mm cannons from Königsberg Battle of Rufiji Delta have survived: one of them is on exhibit outside Kenya’s Fort Jesus in Mombasa; another is on display outside South Africa’s Union Building in Pretoria, and the 3rd is on display at Uganda’s Jinja Barrack. Another has been reported in Congo, but few details have been released.