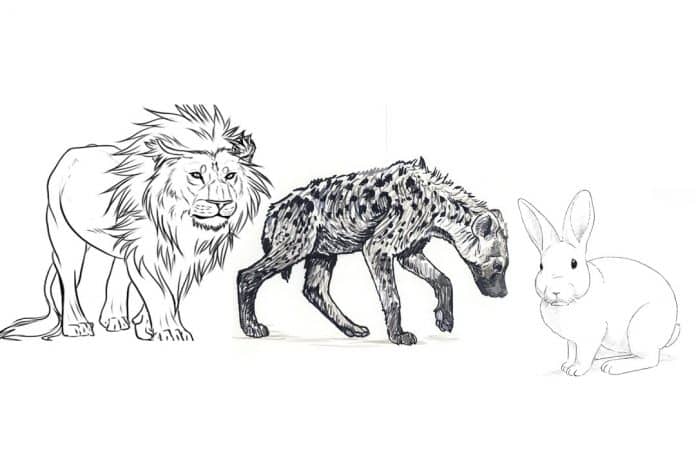 The Cunning Activities of Lion, Hyena, and Rabbit

In ancient times a lion known as Sim’ba, a hyena known as Fee’see and a rabbit known as Keetee’tee decided to engage in agricultural activities. So they decided to go to the village, set up a garden, and plant all kinds of crops, then go home and rest.

When the time came for their crops to be harvested, they began to say to one another, “Let us go out into the field and see what has become of our crops.”

So one morning, very early in the morning, they began their journey, and since their garden was far away, a rabbit named Keetee’tee made his request: “As we head toward the field, let us not stop on the road; and if one of us stops for any reason, let him be turned into a stew. ” Because his colleagues were not as clever as he was, and since they thought they would be able to defeat him, they agreed to his wishes.

So, they went on with their journey; but before they reach any far distance, the rabbit himself stopped.

“Hullo!” said the hyena who was known as Fee’see, “Katee’tee stopped. He has to be eaten. ”

“Yes, that was our agreement,” replied a lion known as Sim’ba.

“About what?” asked his companions, with great enthusiasm.

“I am thinking….,” replied the rabbit, in uncanny ways, “about the two stones, one large and the other small; the small one does not go up, and the big one does not go down neither. ”

Lions and hyenas, standing looking at the stones, said, “Why, really, it is confusing, but you are absolutely correct as you have said.” Then they all went on their way, by that time the rabbit was well rested.

As they walked a short distance, the rabbit stopped again.

“Aha!” said Fee’see, “Keetee’tee has stopped again. Now he must be eaten. ”

“I think so too,” the lion replied.

“Well,” said the rabbit, “I was thinking again.”

Their enthusiasm was very high, and they began to ask him to explain what he was thinking.

“Why…..,” said the rabbit, “I was thinking about this: People like us wear new coats, where do the old ones go?”

Sim’ba and fee’see also stopped as they pondered the matter, shouted together, “Yes, I wonder too!” and all three continued their journey, with the rabbit once again able to rest.

After a while, the hyena thought it was the right time for him also to show his philosophical abilities, he suddenly stopped walking too.

“Now,” shouted Sim’ba, “it will not help; I don’t think we have any other choice except eating you Fee’see. ”

“What do you think?” they asked together.

The Lion and Hyena Got Eaten

So the Rabbit and Sim’ba ate a hyena after that poor response.

When they had finished eating their friend, the lion and rabbit continued their journey, and they came to a place where there was a cave, and there the rabbit stopped again.

“H’m!” Sim’ba grunted; “I’m not as hungry as I was this morning, but I think I can find a place for you, little Keetee’tee.”

“Oh, I believe that is not possible,” replied Ketee’tee, “I am thinking again.”

Rabbit replied: “I’m thinking about the cave. In the past our ancestors used to come in here, and got out on that side, and now I think I will try and follow their ways. ”

So the rabbit entered the cave through one side and emerged on the other side by repeating this exercise several times.

Then he said to the lion, “Sim’ba, my longtime friend, let’s see you try to do as I did,” the lion entered the cave, but was soon caught and unable to move forward or backward.

Without wasting any time Keetee’tee jumped on Sim’ba’s back and then started eating him.

After a while the lion shouted, “Please my brother, let’s try to level things a bit; come also eat the front side of me. ”

But the rabbit replied, “The truth is, I can’t come to your front, because I’m ashamed to look at you in the face.”

After eating as much as he could, he left the lion there, and went on to become the sole owner of the farm and all the produce.

If you love stories that shows more of Rabbit cleverness, our other article “Great Friends: The Monkey, Shark and Washerman’s Donkey” will be a great read to continue with.