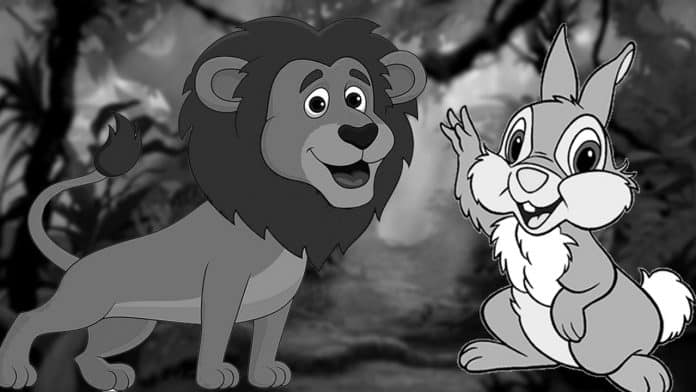 One hot summer afternoon Soongoo’ra, the cunning rabbit, sat hungrily in the shade. Overcome by the rumbling in his belly, he set out into the forest in search of food. After wandering for some time, he came across a large baobab tree. To his delight, he spotted a large beehive snuggled in a hollow near the top of the tree. However, there were two issues. Firstly, he could not get to the hive without some help. Secondly, and more importantly, the tree was located on the property of the notoriously vicious lion, Simba.

None of these deterred him in the slightest and he quickly set out back to town to find someone who would help him get the honey. As he passed the house of Boo’koo, the big rat, who greeted him. So he told him “My father is dead, and he left to me a tall baobab with a honeycomb. I will like it if you would come and share it with me as one of my oldest friends.”

Of course, Boo′koo jumped at that promise, not knowing the tree and the honeycomb was truly the property of the lion. So without delay, they left together with the rabbit.

When the duo finally arrived at the large baobab, they quickly hatched a plan to smoke the bees out. Both animals climbed up quickly and lit a small fire under the hive which quickly drove out the bees. Then they proceeded to devour the delicious honey.

Suddenly out of nowhere the lion himself walked past the tree. Upon smelling the smoke he looked up, but could not identify who was in the tree. So he roared angrily, “Who are you?”.

Soongoo’ra whispered to Boo’koo, “Shut up; the old man is insane.” But after some time the lion roared again even more angrily, “I ask, Who is in my tree? Talk, I command you this instant!” This made Boo’koo so scared he couldn’t help by exclaim, “It’s just us!”

After exclaiming out, the rabbit told him quickly: “You tie me to these leaves, tell Mr. Simba to move away, then toss me down. Then keep quiet while I talk with him.”

Quickly agreeing, Boo’koo, the big rat, tied Soongoo’ra, the rabbit, to the grass, and then said to the Lion, “Go back; I’ll throw these leaves, then I’ll get come down.” So the Lion went back to give way, Boo’koo threw the leaves, and as soon as they touched the ground Soongoo’ra crawled and ran away while Simba was still looking up.

After waiting for some time, the Lion roared, “Now, I say get down!” and, without any help, a large rat descended.

Immediately he reached the ground, the lion grabbed Boo’koo, and demanded, “Who were you with up there?”

“Why,” explained Boo’koo, “Soongoora, rabbit. Didn’t you see him wrapped in leaves?”

“I really haven’t seen him,” the lion replied, in a surprised voice, and, without hesitation, ate Mr. Boo’koo, and then looked for the rabbit, but he had already vanished by that time.

Several days later, Soongoo’ra called his friend, Kobay, the wise tortoise, and suggested, “Let’s take a walk and feast on some honey.”

“Where did this honey come from?” asked Kobay, taking precautions on the offer.

“The honey my father left for me,” Soongoo’ra replied.

“Ahaa, all right; we are together on that plan,” the tortoise said, eagerly; and they went their way.

When they got to the big baobab tree they scaled up with their dried leaves, chased away the bees, relaxed, and started eating.

At that moment Mr. Lion, the owner of the tree, appeared again, looked up, and asked, “Who is in my baobab tree?”

Soongoo’ra whispered to the tortoise, “Shut up;” but when the lion asked the question again even more angrily, the tortoise became skeptical, and responded: “I must talk. You informed me that this honey is yours; should I suspect that this honey belongs to the Lion?”

So, when Mr.Simba inquired again, “Who is in my tree?” he replied, “Only us.” Mr.Simba said, “Come down immediately;” The tortoise replied, “We are coming down.”

All the while, the lion had been looking for Soongoo’ra since the day he ate Boo’koo, the big rat, and suspecting that the rabbit was there with Kobay, and he thought loudly, saying, “Certainly today I found him.”

After noticing that they had been arrested again, Soongoo’ra told the tortoise: “Tie me to the grass, tell the lion to move away, then let me down. I’ll be down there waiting for you. You do know he can’t hurt you.”

“Okay,” Kobay said; but as he bound the rabbit, he suspected that the rabbit wanted to escape, and let him fight the rage of the lion by myself.  He said, “He must be the first to be arrested”.

So, the Lion grabbed the rabbit, and gripped his claws, and said, “can I do anything for you?” The rabbit replied, “eating me would be of no use; I’m too hard.” “So, what can I do for you that will be better?” Asked the Lion.

“I think,” Soongoo’ra said, “you have to grab my tail, turn me, and hit me to the ground. Only then you can eat me.”

The lion was deceived. He grabbed his tail and wrapped it around him, but when he tried to knock the rabbit to the ground he escaped from his hands and ran, at which point the Lion was ashamed to lose the rabbit for the second time.

Outraged and desperate, he looked at the tree and called out the tortoise, “You too go down.”

As the tortoise landed, Simba said to him, “You are too tough; what should I do for you so that I can chew you up?”

“Ahaa, that is not difficult” laughed Kobay; “Just put me in the mud and use your paw to rub my back until my hard-shell crosses over.”

As soon as he heard that, the Lion took Kobay to the water, put the tortoise in the mud, and rubbed his stony back; but Kobay escaped and fled as the lion rubbed on the rock till his paws peeled off. When he looked at it, he saw his bleeding paws, he realized he was deceived, and he said, “Surely, the rabbit has played me today, but I will go after him until I find him.”

The lion, immediately set out on a journey to find Soongoo’ra, the rabbit, and while continued his journey he asked everyone he saw, “Where is Soongoo’ra’s house?” But everyone whom he asked, said they don’t know. The reason was the rabbit already told his wife, “we have to leave this house.” So, his neighbors did not know where he was. The lion, however, continued, asking his questions, until one answered him, “his house is on the top of a mountain.”

Without delay, the lion moved up the mountain and reached the spot where he was shown, and discovered that no one was in the house. He wasn’t bothered; rather he said to himself, “I will wait and hide in the house for Soongoo’ra to return with his wife, I will eat both of them,” as he entered and laid down and waited for their return.

Without delay the rabbit and his wife returned, with no worries; but he quickly noticed the marks from the lion’s claws on the way up. Suddenly he stopped and spoke to his wife, saying “do not follow me, my love. Simba passed by, and I guess he is searching for me”

His wife answered lovingly “I won’t leave you, my husband, I will follow you.”

Though he was pleasured with this confirmation of his wife’s will, Soongoo’ra boldly said: ” Go to your friends”

Soongoo’ra eventually convinced her to return, while he carefully followed the footprints, and confirmed his suspicion— that the lion had entered his house.

“Ahaa!” he said to himself, “Simba is in, isn’t it? “Then, cautiously he stepped back a little, and said aloud:” How are you, house? How are you?” when I pass here every day, I always say, ‘What is your condition, Mr. house?’ and the house would reply, ‘How are you?’ I’m sure someone is inside today. ”

Hearing this, the foolish lion replied, “How are you?”

Then Soongoo’ra let out a mocking laugh, and shouted: “Oh, Mr. Lion! You’re in, and I’m sure you want me as food; but is there any house that talks?”

After that, the lion realized he had been fooled, and he replied angrily, “Wait until I catch you; That’s all. ”

“Ah, I think you’ll have to wait a long time,” the rabbit said; and he fled from him, and a lion followed him.

But to no avail. Soongoo’ra made the old Simba very tired, and he went on saying, “This bully has defeated me; I don’t want to be associated with him at all,” he then went back to his home under a large baobab tree.

Explore all folktales available on our website by clicking here!