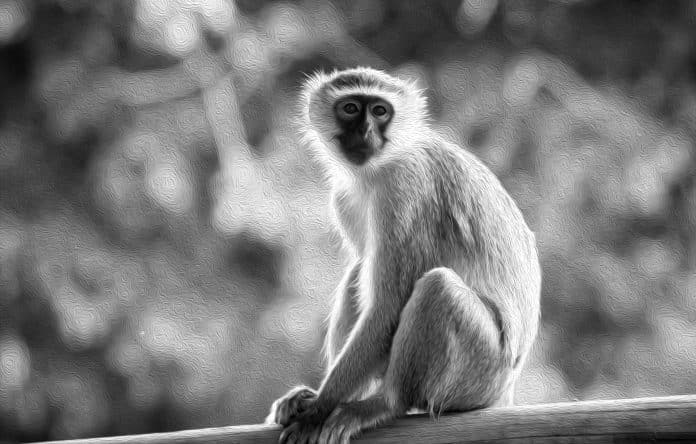 In ancient times, Kee′ma (a monkey) and Pa’pa (a shark) were close friends.

The monkey lived in a large fig tree that grew by the sea, half of its branches was hanging to the sea and half above the ground.

Every morning, when the monkey was eating the fruits of the fig tree, the shark appeared under a tree and said to him, “Give me some food, my friend;” . Whereby the monkey always agreed with one heart.

This went on for months, until one day the shark said, “Well, you have been very kind to me: I would like you also to go visit my house, so that I can repay your kindness.”

“How can I go with you?” asked the monkey; “We land animals can’t get into the water.”

“Don’t worry about it,” replied the shark; “I will carry you. Not a drop of water will catch you. ”

As they were about halfway through the journey, the shark stopped for a bit and said: “You are my friend. I will have to tell you the truth.”

“Why, what do you have to say?” the monkey asked with a little surprise in his voice.

“Well, the truth is that our sultan is very sick, and we have been told that the only medicine that will work is a monkey’s heart.”

“Well,” said monkey, “you are so stupid for not telling me that before we started!”

“How come?” asked the shark.

But the monkey was thinking of ways to save himself, and he did not respond.

“Ah, I have nothing to say now. It’s too late. But if you told me before we started the journey, I would made sure that i have my heart with me. ”

“What? You don’t have your heart here?”

“Oh!” Exclaimed the monkey; “You don’t know this about us? When we leave our homes, we leave our hearts in the trees, and go with our bodies only. But I see you don’t believe me. You think I’m scared. Let’s go to your house anyway, where you can kill me and seek my heart without success. ”

The shark believed him, though, astonished and said, “Oh, no; let’s go back and get your heart.”

“Absolutely not,” the monkey protested; “Let’s go to your house.”

But the shark insisted that they should return to take heart, and start afresh.

Finally, he reluctantly agreed and murmured angrily at the unnecessary trouble he had been subjected to.

When they returned to the tree, he climbed very quickly, saying, “Wait there, shark, my friend, let me find my heart, and we’ll start the journey again in sometime.”

When he reached the branches, he sat down and remained completely silent.

After waiting for a while shark thought the monkey would have found his heart by then, the shark called, “Come, monkey!” But the monkey just kept quiet and said nothing.

At that moment monkey showed out his head from the upper branches and asked, in amazement, “Go? Where?”

“Are you crazy?” asked monkey.

“Mad? Why, what do you mean? ” The shark cried out in dismay.

“What’s the matter with you?” said the monkey. “You made me a washerman’s donkey?”

“What’s so significant about a washerman’s donkey?”

“It is a creature that has no heart or ears.”

The shark, his curiosity quickly overcame his intent to hurry up, then asked to be told the story of the washerman’s donkey, which he narrated as follows:

“The washerman had a donkey, which he loved very much. However, one day he ran away and began to live in the forest, where he became lazy, and as a result he became very fat.

“Eventually the rabbit accidentally passed the path where the donkey lives, and saw the donkey.

“The rabbit is the most cunning animal – if you look at its mouth you will see that he is always talking to himself.

“When the rabbit saw the Donkey he said to himself, ‘Dude, this donkey is fat!’ Then he went to tell the lion.

“Simba (the lion) was not healthy for a longtime and was still recovering from his illness, he was so weak that he could not go hunting. So he was very hungry at the time.

“Mr Rabbit said, ‘Tomorrow I’ll bring enough meat for both of us to have a big party, but you’ll have to kill it.’

“‘Well, my good friend,’ said the Lion, cheerfully; ‘you are very kind.’

“The rabbit went into the woods and found the donkey, and said to him, ‘Sir, I have been sent to give you a proposal.’

“Donkey was very happy about this, and said: ‘Let’s go right away. This is a unique opportunity.’

“When they got home to the lion, they were warmly welcomed, and sat down. The rabbit told the Lion that this was the meat he had been promised, and that he would wait outside. Then he said to the Donkey: ‘I’m going to the yard first. You stay here and talk to your future husband.’

“As soon as the Rabbit came out, the lion jumped on the donkey, and they fought hard. The lion was kicked hard, and struck with his claws which where as weak as his health would allow him. Finally the donkey threw the lion down, and fled to his home in the forest.

“Shortly afterwards, the rabbit came back, and called,” Hey! Simba! did you catch her’

“‘I could not catch her,’ the lion roared; ‘she kicked me and ran away;

“‘Ah, all right,’ ‘said Rabbit; don’t blame yourself too much for that.’

“Then the Rabbit waited for many days, until the lion and donkey were healed and forgot of the last incidence, and he said: ‘What do you think now, Lion? Shall I bring you your meat again?’

“The rabbit went to the forest, where the donkey welcomed him and asked for information.

“‘You are welcome to see your potential partner again,’ ‘said Rabbit.

“‘Ah, darling!’ The donkey cried; “the day you took me to him he hurt me badly. I am afraid to approach him now.”

“They started again; but as soon as the lion saw the Donkey he jumped at her and tore it in two.

“When the rabbit got up, Simba said to him:” Take this meat and burn it. All I want is a heart and ears.

“‘Thank you,’ said the Rabbit. Then he went to roast the meat in a place where the lion could not see him, and took the heart and the ears and hid them. Then he ate all the meat he wanted, and set aside the rest.

“The lion came to him and said, ‘Bring me a heart and an ear.’

“‘Where are they?’ Said the rabbit.

“‘What does this mean?’ The lion roared.

“‘Why, you didn’t know this was a washerman’s donkey?’

“What does this have to do with not having a heart or ears?”

“‘Lion’ are you not big enough to know that this animal would have a heart and ears would not come back a second time?

“The lion had to accept that what the Rabbit was saying is true (Tip: Checkout our other story where Rabbit is masterminding other cunning plans “Folktale: The Cunning Errands of Lion, Hyena, and Rabbit“).

“And now,” monkey told the shark, “you want to make me a washerman’s donkey. Get out of here, go back to your home yourself. You will never catch me again, and our friendship is gone. Goodbye, shark. ”