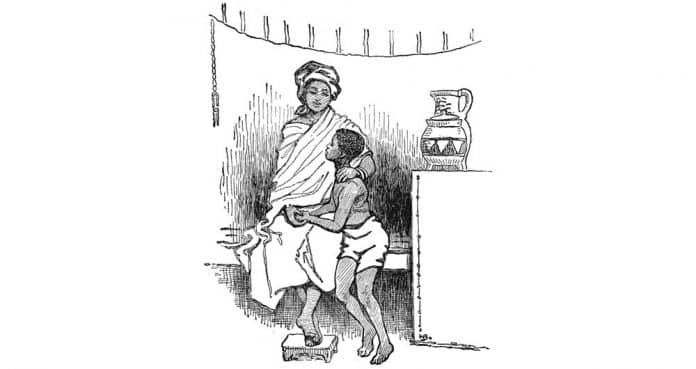 Zanzibar Tales – Mvoo Laa’na (Young Man), the Ape, the Snake, and the Lion

Long ago, in the village of Keejee’jee, there lived a woman whose husband died and left her with a young son. She toiled the entire day for herself and her son to have food however, they were destitute and went hungry often.

When ‘Mvoo Laa’na- the lad, grew older, one day he questioned his mother,” Mother, every day we have to overcome hunger, what did my father work as to provide for you and I? ”

“He was a hunter that set up numerous traps, then we ate whatever got caught in them.” The woman responded.

He headed into the forest the following day where he cut down tree branches, and in the evening, he went back home.  He spent the next day making traps from tree branches and after that day, he twisted coconut fibers into ropes. He put as many snares as he could on the fourth day then afterwards, he set up the leftover traps on the fifth day. On the last day, he went to double check his traps and ensure that they are working properly, he was amazed to find a ton of prey, more than enough for him and his mother, as a result he ended up taking most of it to the great city of Oongoo’ja. He sold his catch then bought corn among other things, and he filled their house with plenty to eat.

But shortly afterwards, as he checked the traps he set, there was nothing being caught in them.

However, one morning he found a chimpanzee captured in a trap he owned. Right before he could kill his prey, the chimpanzee spoke, “Do not take my life, son of man, I am Neea’nee, the chimpanzee. Free me of your trap then release me. Someday, I shall rescue you from the sun if you rescue me from the rain today.”

So, ‘Mvoo laa’na freed the chimpanzee. Once Neea’nee climbed a tree and rested on one of the branches, she said to the young man, “I will reward your generosity with a little guidance: All human beings are evil, believe me. Do not do good to a man, for the first chance he gets, he will repay you with evil.”

The next day, in the very same snare, ‘Mvoo Laa’na discovered a snake. The snake shouted when he started yelling out to bring the village to kill the snake, “Do not alert the other villagers to come take my life, come back son of Adam. My name is Neeo’ka the snake, I beg you to remove me from your trap. Someday, I shall rescue you from the sun, when you are in need, if you rescue me from the rain today.”

So, he released the serpent and as he was leaving, the snake said, “If I can, I plan to repay your generosity however, never trust any human being, for if you do good to a man, he will he will repay you with evil the first chance he gets.”

The following day, in the exact trap that caught Neea’nee and Neeo’ka, was a lion. ‘Mvoo laa’na was scared to move any closer to it however, the lion spoke, ‘Do not run, I’m Kong’way, an elderly lion. Free me of this snare and I will cause you no harm. I shall rescue you from the sun, when you are in need, if you rescue me from the rain today.”

So, the boy trusted the lion and released him but before he went his way he said, “You have shown me kindness son of man, I intend to return it if I can, but do not be kind to a man for he will repay you with unkindness.”

The next day, a man was trapped in the same trap and when the young man released him, he reassured ‘Mvoo laa’na that he would never forget the service he had performed to restore his freedom and save his life.

In fact, it seemed that he had already caught all the prey that would be caught in his traps but every day ‘Mvoo laa’na and his mother had to face hunger. Finally, one day ‘Mvoo Laana said to his mother, “Mother, make me seven cakes from the little food we have left, and I will go hunting with my bow and arrows. So, his mother baked a cake and he took the cakes, a bow and arrows and went into the forest.

The boy walked on and on, but did not see any prey then he finally realized that he was lost and had eaten all the cakes except one.

He continued on his way without knowing if he was heading further away from or closer to their home, until he came to a strange tree that he had never seen before. He was so weak and tired, that he felt the need to lie down and die. Suddenly, he heard someone calling him and once he looked up, he saw the chimpanzee Neea’nee who said to him, “Son of Man, where are you going?” ‘Mvoo laa’na replied sadly “I don’t know, I’m lost.”

“Well, well,” said the chimpanzee, “Don’t worry, sit down and relax until I come back and I’ll pay you generously like the hospitality you once showed me.”

Neea’nee went to the garden, stole a lot of bananas and papayas then took the fruits to ‘Mvoo Laa’na and said“ Here is enough for you to eat. Would you like anything else? Perhaps a drink?” However, even before ‘Mvoo Laa’na could answer, the chimpanzee picked up a bucket and returned it filled with water. So, the boy drank and ate to his fill. Afterwards, they said to each other, ” Until our paths cross again, goodbye.” then each went his own way.

‘Mvoo Laa’na walked a long distance not knowing which way to turn, and then he met Kong’way the lion, who asked him“ Where are you going, son of Adam?And the young man replied with as much sadness as before “I do not know, I am lost.”

“Come on, be happy” said the elderly lion, “Relax here a little, I want to pay your generosity today as per the generosity showed me that day.”

So ‘Mvoona Laa’na sat down and the lion left. After a while he came back with prey he had caught along with fire, the lad cooked and they ate. When they finished, the boy felt re-energized. The two bid each other goodbye and, everyone went their own way.

After another long journey, the young man came to a field and where he met an aged woman that asked him, ” Sir, my spouse is ill and has been taken away. I seek someone out to prepare him medicine, can’t you fix it?” but the young man responded, “My pleasant lady, I am afraid I can’t assist you as I am not a healer, but a mere hunter and I have never used drugs since birth.”

Once he reached the path that led into the capital, he caught sight of a water hole and alongside it, there was a bucket. ‘Mvoona Laa’na muttered to himself, “This is exactly what I needed. I will get clean water to drink from here. I will check if I can reach that water.”

As he looked around at the corners of the well to check the water’s height, and behold, there lay a great serpent which also saw the boy and asked, “Wait a minute, son of Adam?” The serpent left the well, then continued, “How? Do you know me?”

“Undoubtedly, I do not” replied the boy as he shrunk back a bit. “Good! Good!” said the serpent, “I definitely remember you. I am Neeo’ka, you helped me get out of the snare. Do you remember I said if you rescued me from the rain, I would rescue you from the sun someday? You appear to be a newcomer to the city you are going to; so, hand over your small pack and allow me to place useful things for once when you get there.

So, ‘Mvoo Laa’na gave out his small bag and Neeo’ka filled it with silver and gold chains and told the boy to be free to use it to benefit himself and they parted ways warmly.

Upon his arrival at the capital, he was met with the man he released from his trap. He suggested ‘Mvoo Laa’na to join him at his home, whereupon the young man did so, and the man’s wife prepared dinner for him.

The first chance he got to sneak away, the man approached the king and reported, “A stranger at my residence has a pack filled with silver and gold chains, he claims he acquired it from a serpent living in a water hole. Although he is disguised as a man, I know it is the serpent with the power to appear as a human”.

Upon the king hearing this, his soldiers were sent to bring ‘Mvoo Laa’na and his small bag back to him.

The very man ‘Mvoo Laa’na freed from his snare, convinced the rest of the community that the chains would bring calamity and harm the children of both the king and Vizir.

People became agitated and they tied the boy’s hands behind his back.

But soon the snake came into the city and went to lie at the soles of the very man that had spoken ill of ‘Mvoo Laa’na. Upon the crowd witnessing this, they asked the man “How can this be? There is a large snake living inside he water hole yet it is sitting with you, ask him to get out.”

But Neeo’ka would not move. Eventually, they released the boy and tried to apologize for accusing him falsely of wizardry.

The king asked the lad, “Why then would that man welcome you into his house, only to stab you in the back?”

Finally, ‘Mvoo Laa’na explained all that happened to him with the chimpanzee, the serpent and lion along with how they warned him of the consequences of human kindness.

The king responded, “While people are repeatedly unappreciative, that is not always the case, only a few bad ones. As for our companion, he warrants to be stuffed into a bag then sunk into the ocean. He received kindness yet he repaid it with evil.”

Explore all folktales available on our website by clicking here!