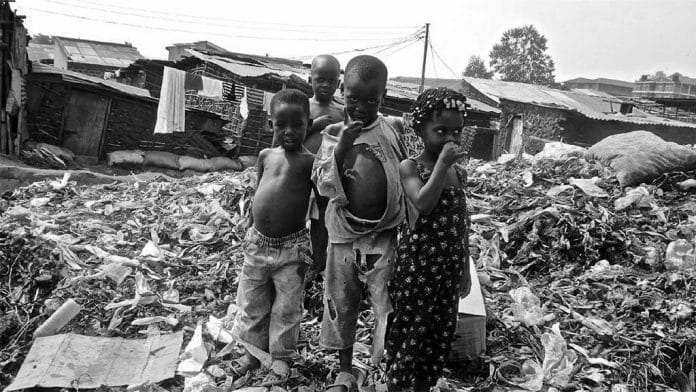 History of Poverty in Tanzania

Tanzania’s population figures stand at 55.7 million. Figures from the World Bank show that 49.1 percent of Tanzanians lived on less than $1.90 per day in 2011. This figure is an improvement on the 2007 report that showed a rate of 55.1% for poverty in Tanzania. Since 2010, Tanzania’s economy has witnessed a 7% annual GDP profit. This economic growth is associated with a positive trend towards poverty reduction in Tanzania. According to the 2019 World Bank report, in the last 10 years, poverty in Tanzania had dropped by 8 percent, from 34.4 percent in 2007 to 26.4 percent in 2018.

Indicators of Poverty in Tanzania

The GDP per capita trend from local goods and services is divided equally, and Dar es Salaam has a GDP per capita of Tshs 1,600,000 compared to the Tshs 600,000 GDP per capita figures of mainland Tanzania. Tanzania has maintained a high level of economic growth since 2001. However, a high level of poverty in Tanzania poses a challenge if any pure economic growth can be achieved in human development. This is one of the major effects of poverty in Tanzania which will take time and effort to reduce or eliminate.

Arusha and Dar es Salaam are classified as areas with moderate levels of human development, according to the Human Development Index. However, other parts of Tanzania have low human development. Also, HDI indicators show a decline in child mortality and an increased life expectancy. This indicator is one of the measures of poverty in Tanzania, which needs constant monitoring and improvement year after year.

There is a great variance in trends of alleviation of causes of poverty in Tanzania between urban and rural, where up to 70% of the Tanzanian population lives. Donations play a pivotal role in the unbalanced distribution of economic growth as urban households have access to better education, infrastructure, and medical care. Migration trends towards urban growth, which have grown to 29.1 percent in 2012 from 5.6 percent in 1967, further widen this difference. Another cause of rural poverty in Tanzania is the lack of energy supply to a large chunk of the population. This means the electricity sector is a burden to the government.

Despite the large number of the Tanzanian population living in rural areas, there is a high dependence on farming that depends on rain. 76% of Tanzanians depend on agriculture or natural resources for their sustenance. Dependence on agriculture leaves Tanzanians susceptible to various economic shocks caused by climate change.

Low economic growth is a contributing factor to poverty amongst children in Tanzania. According to 2012 poverty in Tanzania statistics estimates, over one-third of families “live below the poverty line”; they make less than a dollar per day, while 20 percent of the population “lie below the food poverty line in Tanzania.” However, the rural communities of Zanzibar and Mainland Tanzania are the most affected. This wealth imbalance between urban and rural areas is a major cause of the prevalence of child poverty in Tanzania rural areas, with 48 percent lacking basic necessities compared to only 10 percent of their peers living in urban areas.

Systems of Leadership at the Community Level

Good Leadership and Governance as a Necessity for Growth

Like other poor countries such as Uganda, Burundi, and Malawi, Tanzania has poor systems. Service delivery research shows that “bribes paid to police officers, courts, tax services, and land offices accounted for 62% of official public spending in these areas”. The state’s legitimacy as the guarantor of public interest is challenged – where holders of public office consider serving specific customer groups connected to them on an ethnic, geographical, or other relationship basis; the rule of law fell into disrepair – corruption thrives in the public sector where the law applies to some set of people but not to others, and where law enforcement is often used as a tool for promoting personal interests instead of promoting public interests. Institutions of accountability have been rendered ineffective – there are obvious weaknesses in accountability institutions in highly corrupt countries. The disposition of national leaders in the fight against corruption is weak – corruption is rampant in the public sector when the authorities are either reluctant or powerless to deal with it.

A solution of poverty in Tanzania, will lie heavily in fixing and setting up good leadership and governance in general, as the individuals on these positions are responsible in making sure those strategies are working and meeting the objectives.

Tanzania has set its goals for poverty alleviation in tandem with the Millenium Development Goals (MDGs) and the United Nations Sustainable Development Goals (SDGs). The actualization of these goals at the local level has been incorporated into long-term and medium-term policies. The National Growth and Poverty Reduction Strategy (NSGRP) for Mainland Tanzania and the Growth and Poverty Reduction Strategy (ZSGRP) for the island of Zanzibar are among the medium-term policies. These programs aim and act as one of the ways to reduce poverty in Tanzania through building national infrastructure, productive capacity, creating employment opportunities, improving accountability of the government, and enhancing living standards.

Close to 90% of Tanzanians live in poor rural areas. Seasonal rainfall, agricultural land, and people are resources common to all villages. Apart from these, other villages have resources like minerals, natural forests, rivers, lakes, seas, and so on. 65.7 percent of the Tanzanian population live on $1.25 or less per day as of 2007.

A peaceful Tanzania can be an opportunity for the country to use its resources for sustainable development. Even before independence, Tanzania had enjoyed stable peace. Due to the fact that there are over 150 ethnic groups in the country, Kiswahili as a national language was strengthened during the administration of Mwalimu Julius Nyerere; and the abolition of chiefs that existed in each tribe immediately after independence. In spite of this valuable opportunity for sustainable peace, the country’s economic situation has not improved compared to Rwanda, Mozambique, and Angola, which have experienced civil war for many years, but their respective economies are recovering.

For decades, the IMF and developed countries have spent billions of US dollars on enabling government systems, but instead of poverty level in Tanzania to drop, it has increased. Since the 1980s, there have been many programs funded by international bodies aimed at improving the national economy. These programs include the Structural Adjustment Program (SAP), the National Economic Survival Program (NESP), Rolling Plan and Forward Budget (RPFB), Economic Recovery Program (ERP), and the Economic and Social Action Program (ESAP). To date, a 25-year Poverty Reduction Strategy (PRSP 2001-2025) in line with the Millenium Development Goals (MDGs – 2000 to 2015) exists; also, there is currently a plan called Kilimo Kwanza. Despite the plans considered, the economy is still not strong enough to provide the impetus for poverty eradication. The concept of donor-led projects is widespread from the national level to the village – projects like potable wells, minor irrigation projects, health facilities, school construction, and so on can be implemented by using local resources; however, they are left unimplemented in the hope of getting foreign donor support. Well-known economic indicators like gross domestic product (GDP) and gross national product (GNP) show that the country’s economy is growing; however, they do not indicate how wealth is allocated to the majority. Tanzania’s economy is recorded to be improving yearly, but over 80% of its rural population lives below the poverty line. In the early 1990s, many international financial institutions  (including the IMF) implored Tanzania to cut jobs and discontinue employment in key sectors like health, agriculture, and education as a condition for financial support; the economy became paralyzed, and now it has a long way to go to achieve social and economic growth.

Developing countries, including Tanzania, experience political conflicts immediately after general elections. The worst examples of such conflicts are those that happened in Kenya after the October 2008 General Elections and Ivory Coast after the 2011 General Elections. After the 2010 General Elections in Tanzania, there were conflicts, which fortunately did not escalate. The conflicts erupted between the opposition parties and the ruling party following complaints from opponents and other activists that the National Electoral Commission allegedly favored the ruling party. Fierce controversy erupted in Zanzibar (which is one of the constituent parts of Tanzania) after the 2005, 2000, and 1995 General elections where the Revolutionary Party (Chama cha Mapinduzi – CCM) beat the Citizen’s Union (CUF). Politicians have an inclination to splurge billions of dollars (usually to bribe the poor to vote for them) during elections to gain or protect their leadership positions. However, little effort is being made towards programs of poverty reduction in Tanzania overall and voters’ own communities.