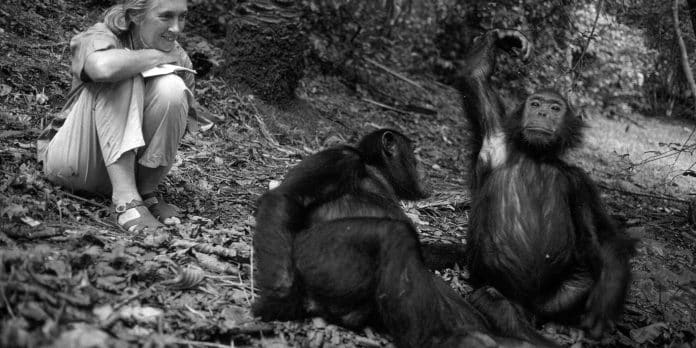 Gombe National Park is one of Tanzania’s smallest parks and was founded in 1968. It covers 35 km2 (13.5 sq miles) of protected land, and it sits alongside hills on Lake Tanganyika’s east shore. The Park’s landscape consists of steep valleys, and vegetation in the area includes grassland, woodland, and tropical rainforest. The Park can only be accessed by boat.

The Gombe National Park is popular since this is where Jane Goodall launched her behavioral research on Chimpanzee populaces. The Kasekela Chimpanzee Community (written Kasakela in early publications) was among those she studied. This community, which resides in the Gombe National Park, has been featured in many documentaries and books.

Gombe National Park has a high diversity level, which contributes to its popularity amongst tourists. Alongside the Chimpanzees, other primates like the Blue Monkeys, Red-tailed Monkeys, Red Colobus, Olive Baboons, and Vervet Monkeys inhabit the Park. The Red-tailed and Blue Monkeys are also known to cross-breed in the area. Besides the primates, the Park also boasts with bushpigs and over 200 bird species. Various snakes, the occasional hippopotami, and leopards are also found on Gombe National Park lands.

Gombe National Park visitors can view the chimpanzees on a trip into the forest. Swimming and snorkeling in Lake Tanganyika are also allowed, where approximately 100 kinds of colorful cichlid fish can be seen.

In 1960, Jane Goodall made her first journey to Tanzania when she was 26. She had no formal college training. At the time of her travels, it was accepted that humans and chimpanzees share more than 98% of a similar genetic code, making the two species undoubtedly similar. However, not much was known about the general behavior and community structure of chimpanzees.

When Goodall began her research at the Gombe National Park, talking about the mind of an animal was not permissible in ethological circles. The belief was that only humans had minds. It was not proper to refer to an animal’s capability to have a personality. While it was general knowledge that animals had unique characters, ethologists strived to make chimpanzee personalities a “hard” science. They wanted to shield themselves away from attempting to explain such things without prejudice.

However, Goodall’s research ultimately proved the emotional and intellectual civilness of non-humans, with a particular focus on chimpanzees. She received support from Louis Leakey, a renowned anthropologist, and established a small research station in the Park. In the months spent there, Goodall hoped to learn the behaviors of our closest known relatives. She was particularly interested in the Kasekela Chimpanzee Community and tracked troops to observe their daily habits. Slowly, one of the troops accepted her, and Goodall experienced intimate and rare glimpses into their society.

Without formal research directing, Goodall noticed details within the chimpanzee community that strict scientific doctrines would possibly have been overlooked. Goodall gave the chimpanzees she observed names, like David Greybeard and Fifi, and noticed a unique personality attached to each of them. However, the idea was unconventional at the time. Generally, a scientist would have numbered each subject.

During her research at the Gombe National Park, she found that just like humans, chimpanzees can also have personalities and rationalize thoughts and emotions such as sorrow or joy. Goodall also noticed that the chimpanzees have affectionate behaviors like hugging, kissing, giving each other a pat on the back, and tickling. These behaviors were considered identifiable with humans only. In her reports, she insists that these observations show that affectionate, close, and supportive bonds develop between chimpanzee troop members and others in their communities. These bonds can last for over 50 years. Her findings suggest that these bonds are similar to those humans form and that genes alone are not the only similarity between humans and chimpanzees.

Intelligence, emotions, and social and family relationships are amongst both species.

Within the scientific community, Goodall’s findings in the Gombe National Park are best known for putting two long-standing beliefs to the test: that chimpanzees were compliant vegetarians and that tools could only be constructed by humans. Goodall observed a chimpanzee fishing for termites. She watched the chimpanzee repeatedly insert a grass stalk into termite holes before removing it to eat the stalk covered in clinging termites. Goodall also observed early signs of toolmaking within the chimpanzee community. They would strip twigs of their leaves to make them more effective. For long, humans had distinguished themselves from species in the animal kingdom by claiming to be toolmakers. Louise Leakey responded to Goodall’s findings by stating that men and tools should now be redefined, or chimpanzees should be accepted as humans.

During her studies, Goodall also found evidence that chimpanzees have mental traits similar to humans. These included abstraction, reasoned throughs, generalization, the concept of self, and symbolic representation.

While Goodall observed many affectionate and peaceful behaviors, she also noticed the aggressive side of chimpanzees at Gombe National Park. She found that the species would hunt other smaller primates, like the Colobus Monkeys, in an ordered manner before feasting on them. She watched as a hunting group isolated a Colobus Monkey in a treetop and blocked any possible escape routes. One chimpanzee then climbed up to the monkey and captured and killed it. Chimpanzees in the hunting party took carcass parts and shared them with others who showed behaviors of begging. The chimpanzees in the Park kill and eat up to one-third of the Colobus Monkey populace every year. These findings alone challenged a significant scientific belief surrounding chimpanzee behaviors and diet.

More shocking and disturbing were Goodall’s findings on the aggression and violence amongst the female chimpanzees. Dominant females tended to deliberately kill the young of others in the troop to maintain their position of dominance.

Sometimes, these females went as far as cannibalism. About this, Goodall stated that she believed chimpanzees to be, for the most part, nicer than humans during her first ten years of studying troops. However, once she discovered that they could be brutal, she realized that these primates have a dark side like humans. Her findings from her research at the Gombe National Park transformed the knowledge surrounding chimpanzees at the time in regards to their diet and feeding behaviors. Goodall also presented evidence that social similarities between chimpanzees and humans exist, even though they are of a darker nature.

Goodall resided at Gombe National Park for approximately 15 years. Today, scientists still find value in the long-term data she collected. The GSRC (Gombe Stream Research Centre) was founded in 1967 to coordinate ongoing chimpanzee research. A team of Tanzanian citizens mainly runs it. It is known as the longest-standing field study of an animal species in their natural habitat, with an over 60 years record as of now.

Due to this long-term data, scientists have been able to see demographic patterns, culture, male politics, and mother-infant relationships stretching for multiple generations within the chimpanzee communities. Collecting data such as this is valuable and rare. The continual research at Gombe National Park also provides insight into the current issues surrounding chimpanzee troops, such as diseases, habitat disturbances, and poaching. These threats against the species affect other species in the Park as well.

Goodall’s research has significantly changed ethical thinking and how behavioral studies are performed. While animal emotions were once dismissed as anthropomorphism, Goodall’s findings of them in their natural surroundings show that relationships, societies, and behaviors of animals are complex. Her chimpanzee research improved designs for new protected habitats, food, and other requirements. The Jane Goodall Centre for Primate Studies also led new research on the baboon populace at the GSRC.

Humans pose the primary threat to Gombe National Park’s biodiversity. Even though Tanzania has set aside 25% of its land for reserves and parks, its wildlife populace is still declining.

The decline in the populace is primarily due to a lack of cooperation between rural communities, park heads, and government sectors. Villages often lie between the parks, which also creates an obstacle for animal movement. Without animal protection incentives, villagers hunt animals for food or kill them when they feel unsafe. Poverty in the country also increases the demand.