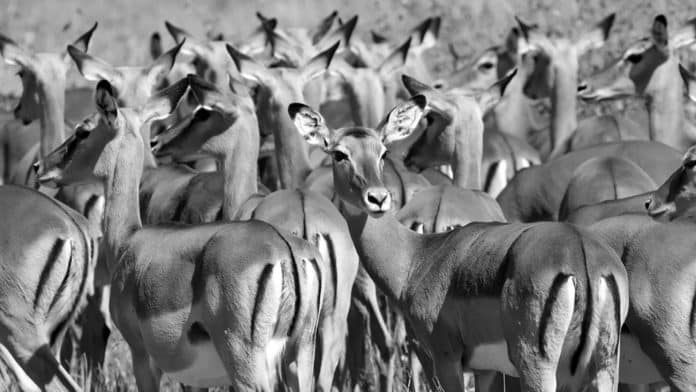 The Deadly, Bizarre, Rare, and Quirky was a post I made a few weeks ago about some of Serengeti’s oddest animals. Our subject this week is the Serengeti Antelopes. One of the key reasons the Serengeti is usually regarded as Africa’s finest national park is the incredible variety of enormous creatures that coexist inside its ecosystem. An outstanding example of this diversification is the Antelope species. Our safari guests have observed 16 different antelope species throughout the years, with 12 of those species showing up frequently on numerous of our safaris.

This is a collection of photographs of the various Serengeti antelope species over the years:

These enormous antelopes on the Serengeti are nimble and notoriously tricky to capture because they are terrified of cars, besides from the Ngorongoro Crater, where they are accustomed to the presence of vehicles. Northern Serengeti Woodlands and Southern and Eastern Serengeti Plains are good places to sight them during the dry and green seasons.

This is the name given to the Serengeti Ecosystem’s tiniest antelope, which is also one of its cutest. As a practice, Dik-diks are monogamous and stick with the same mate for the rest of their lives. They can be found throughout the place, although they congregate in regions with many covering verdures.

It is common to see Topi, a massive antelope on the Serengeti, grazing on its plains. Although it may be seen across the Serengeti, it is a rare sight on the short grass plains of the Eastern Serengeti.

Because of their enormous size, most predators have an ordeal taking them down, except lions and spotted hyenas.

The Topi to the untrained eye is remarkably similar to this close relative. Are you able to tell the difference between the two Serengeti antelopes? The hartebeest lacks the darker face colouring or the blackish face mask and has a milder body colour.

Serengeti has the second most common antelope. It is estimated that their population in the region is half a million. Cheetahs prefer prey like the Thomson’s gazelles.

This Serengeti antelope looks somewhat larger than Thomson’s gazelle, lacks the dark side stripe of its closely related cousin and is a much more drought-resistant species, capable of spending weeks without water. Even during the dry season, the eastern and southern Serengeti grasslands are always home to Grant’s gazelle.

Regularly, you may come upon this Serengeti antelope in the woods. The Moru Kopjes area of the Central Serengeti is where they are most commonly spotted. Only the most ferocious lions find it appealing because of its thick coat. Three females pose nicely for the camera in the snapshot provided by a returning guest.

There are numerous watercourses in the Central Serengeti, and the Reedbuck is commonly sighted in the lush grass around them. This Serengeti antelope is a favourite prey item of the fabled leopards of the Seronera Valley, are easily frightened animals.

There are just a few species of these antelope found in the Northern Serengeti’s Wogakuria forests. The Oribi’s fur is reddish-brown on top and has a spotless white base. The antelope’s most distinctive characteristic is a black patch or smell gland located beneath each ear, easily recognizable.

The black teardrop patch above its shiny black nose distinguishes these Serengeti antelopes from the Oribis. Steenboks are more common than Oribis. These Serengeti gems can be spotted in the north and south of the Serengeti around Bologonja Springs and Kusini.

This adroit variety can be found on the granite kopjes of the Serengeti woodlands. Thanks to their stocky, rough-coated bodies, these Serengeti antelopes have evolved to leap effortlessly from rock to rock. The kopjes near the Lobo airstrip are the most incredible viewing spots in the North Serengeti. They are ubiquitous and may be seen on the Kusini and Moru Kopjes in the park’s southwest part.

The Bushbuck is one of the most elusive Serengeti antelopes. A look at its white dots is enough to tell you it’s there. It is common for them to reside in the bushy refuge, and they prefer to remain solitary.

The Impala is the most graceful Serengeti antelope. It is one of the Serengeti’s most numerous and widespread antelope species.

In this species, horns are only found in males.

This is the most abundant Serengeti antelope species, the wildebeest, with a population above a million. There’s no doubt that the wildebeest’s annual migration is one of the most breathtaking natural spectacles in the world.

This aerial shot of the wildebeest migration does not justify the migration’s enormous size and weight. This photo was obtained from a small plane flying above the eastern Serengeti plains during the green season.

15. The Oryx of Eastern African

This is one of Serengeti’s most critically endangered animals. According to mythology, a few of these Serengeti antelopes are said to remain on the Salei Plains east of the Serengeti. This photograph was taken in Tarangire National Park, where our guests often spot them.

The gorgeous Lesser Kudu is also an incredibly rare Serengeti antelope, yet it is much more abundant than the Oryx. They can be spotted in Tarangire and the southwestward Serengeti (often near Kusini Camp).

Because of its popularity, the game industry have even made a very popular Serengeti antelope crossword clue, you can buy some on different online marketplaces including Amazon.

A Quick Snapshot of the Pemba Flying Fox