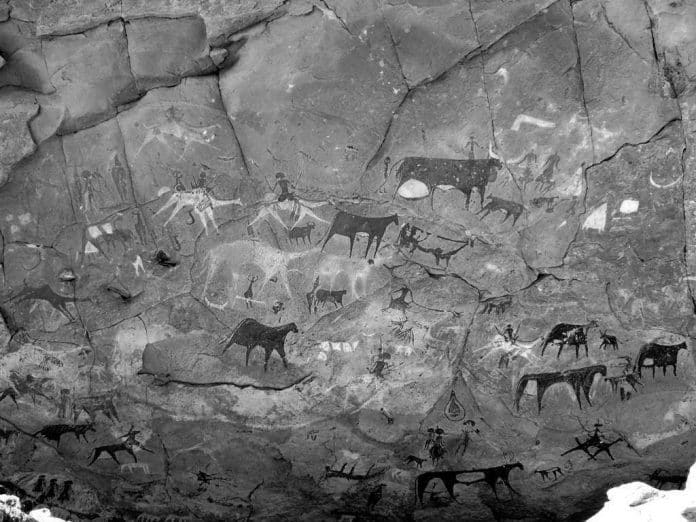 The Kondoa Irangi Rock Paintings are a set of primordial paintings on rock shelter walls located in the central part of Tanzania. In 2006, the Kondoa region became a UNESCO World Heritage Site due to its remarkable rock art collection. In 1937, Tanzania’s Department of Antiquities designated the sites as national monuments. The drawings are situated roughly 9 km east of the primary roadway (T5) between Dodoma and Babati and 20 kilometres north of Kondoa in the Kondoa Commune of Dodoma Region in Tanzania. Concrete posts delineate the site’s boundaries. Giant piled granite stones typify the area’s landscape. The western fringe of the Maasai plains is made up of these boulders, forming rock shelters that face away from the prevalent winds. The surfaces of the rock shelters are usually flat because of rifting, and the drawings are found on these surfaces, shielded from weathering.

The Kondoa Irangi Rock Paintings still constitute a part of a contemporary ritual of creation. The Maasai people use it in ritual feasting, and the Sandawe use it in their traditional healing rituals, known as simbó. The enduring importance and continuous use of the shelters and the art show a cultural continuum among the various linguistic and ethnic groups who have lived in the place over time. Around 1970, paintings were still being made on the rock by Sandawe men. Ten Raa made inquiries into why they were doing it. He categorised their reasons into three – sacrificial (paintings made on unique clan-spirit hills that depict healing and rainmaking ceremonies), magical (paintings that depict the animal the painter intends to kill) and casual.

The Kondoa Irangi Rock Paintings portray elongated humans, hunting scenes and animals. Older drawings of the ‘naturalistic custom’ are mainly red and identified with hunter-gatherer people, in Kondoa and throughout the Arusha, Manyara, Mara and Singida areas of Tanzania. A newer ‘late white’ style usually depicting cattle is often superimposed on the naturalistic custom drawings. The late white paintings are credited to Bantu smallholders. The paintings are believed to have been made after the expansion of the Bantus into the region. Nilotic and Cushitic pastoralists have been credited with ‘white and red’ paintings. With the exception of paintings recently documented, there are no direct dating proofs. Smith and Bwasiri noted that the rainmaking ceremonies done by the Sandawe people originated from the Bantus. It is a result of an extensive history of cultural association with the Bantus and other people. The scholars advise caution in the use of recent ethnographic proof to explain the art’s history.

The walls of the Kisese II rock shelter are home to arts belonging to the naturalistic custom. The rock shelter is located in the Kondoa area, and proof of activity on the ground dates back to over 40,000 years back. According to a former president of South Africa, Nelson Mandela, the rock art of Africa is more than just the shared heritage of Africans; it is a heritage that belongs to all of humanity.

Many separate sites are located within the boundaries of the UNESCO World Heritage site. It is estimated that there are between 150 and 450 decorated rock shelters in the area. A few of the most notable, important and otherwise well-dug-up sites are discussed below.

The Kisese II Rock Shelter is a section of the UNESCO World Heritage site situated in the Kondoa area of Tanzania. It holds transitional accumulations dating back to the Middle Age and Later Stone Age. The rock shelter has safeguarded many Kondoa Irangi rock paintings, pottery, lithics, beads and other artefacts. The site is studied to gain insights into the main communal transitions that occurred in the late Holocene and Pleistocene eras. Seven Holocene persons are buried in the rock shelter. Few well-dated places cover this transitionary period; therefore, excavations from Kisese II have been highly informative. Radiocarbon dating tests were conducted on many eggshell beads found on the site, with the oldest dating back to 46.2 to 42.7 cal ka BP.

Louis and Mary Leaky were the first to excavate the Kisese II rock shelter in 1935. The excavation ditch was expanded by Raymond Inskeep in 1956. He discovered the huge assemblage of ostrich eggshell beads that made radiocarbon dating of the site possible. Six thousand rocky artefacts were also found in the original place. The Leakeys and Inskeep studied the depositions’ stratigraphic nature in their effort to determine the site’s age. The rocky artefacts at the site range from cores to flakes that are mostly composed of native quartz-based stones mainly made by utilizing the LSA microlith technique or the Levellaois technique. The site backs the notion that certain MSA technologies like this style of creating stone tools endured into the Late Stone Age. Tryon et al. suggested that the transition era could have been at least five to ten thousand years.

Kolo 1 is locally referred to as Mungomi wa Kolo. The painting in this rock shelter is made up of fine-line red ochre paintings that portray many animals and people.

A synopsis of a few ochre drawings was published by TAM Nash in 1929. He uncovered them in a place close to Kondoa-Irangi. He identified the granite sanctuaries as a suitable spot for rock arts and subsequently combed the hillside for paintings proving himself right after roughly ten minutes. An image of an elephant and the figure of a human carrying a cane is depicted in one of the paintings. Nash noted the human’s peaceful posture, doubting the possibility that the painting was designed to portray a hunting incident. Other Kondoa Irangi Rock Paintings depict a probable rhinoceros remnant, a manlike figure made up of coordinated rings on the head with unbroken lines running from the crown down to the torso, giraffes and a few other shapes whose intended portrayals are not clear.

Extreme care must be taken when digging up the sites because of the spiritual importance of the rock shelters to the present-day dwellers of the area. According to papers 13 of the UNESCO World Heritage, the sites are still used by the native agropastoral Irangi people for ritual curative purposes. A few of the ritual acts endanger the Kondoa Irangi Rock Paintings’ integrity, like the act of hurling liquified animal fat. Since Tanzania’s government has not formally recognized the native belief systems, there is a conflict regarding the conservation and management of these sites. The problem is not unique to Tanzania, as the decolonization of the archaeology of Africa, in general, remains an ongoing activity.