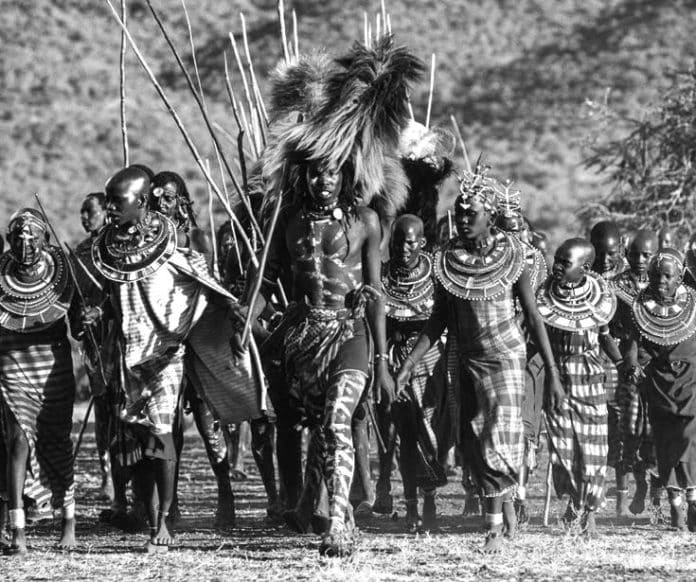 After the Maasai circumcision and the ceremonies of puberty, Maasai youths become full men and enter another stage of their lives which is a new generation of warriors. A new generation of Maasai warriors is being organized for about 7 years, these young people continue to be warriors from 15 to 30 years old. This new militant group gets to be known as “ilkeliani”. Throughout this period a new generation of fighters live with their families. When they reach puberty they leave the family homes and live with other fighters in a village built for warriors, meanwhile their loved ones and their superiors continues to direct the warriors. Often the village / army camps “Manyata” are built along the water with good pastures and include 49 households (lucky number for Maasai). These houses are built by the parents, especially the mothers of the warriors, in these houses there is a bed for the warrior’s partner and the girl’s mother as well as a warrior’s bed.

Dreams of Every Maasai Boy

“It is the dream of every Maasai youth to be a warrior. The word itself seems to have a supernatural power. A warrior should be strong, intelligent, confident, brave, prudent and wise. He is required to hunt and kill lions for his headdress, to protect livestock against wild animals, to return stolen or often lost livestock from long distances and to protect his community. The Maasai warriors enjoy their unity, cooperating in various matters together. In the various services that warriors provide in the community in which they live, they increase the level of immeasurable happiness, coping with various risks and relationships. Without their songs, poems, relationships with women to show their masculinity / masculinity, the life of the Maasai would not be what it is today ”- Tepilit Ole Saitoti.

As the Maasai warriors grow older they can live in remote areas and often move to forests where there are special Maasai warrior ceremony camps set up for them in the bush. While there the warriors continue their education and pray to the only God whom they call “Engai”. After many years of protecting their livestock against rhinos, lions hunting, seducing girls, caring for and beautifying their long hair using red clay and developing their martial arts, the challenges from new generation warriors are enormous, and within this time veteran warriors are expected to prepare the new generation warriors to become adults, this stage is called “Eunoto”.

The ceremony of the advent of age before reaching the status of senior combat “Eunoto” takes place in villages built by special warriors for such ceremonies. The new generation arrive at the Maasai warrior ceremony wearing special ceremonial clothing and a white stick instead of a spear. A spear is one of the most valuable tools a warrior should have. It is often decorated to symbolize peace and its upper part is not burned on the ground. Carrying a white stick indicates that the new generation warriors are ready to enter the adult stage.

Together, the new generation warriors and veteran warriors choose a leader called “Alaunoni” who comes from a new generation warrior group with the main goal of representing the new generation as they move towards adulthood. This leader must be respected, his past life also must have nothing to do with grievances of any kind. He should be healthy, have a lot of livestock, be of Maasai descent, never kill anyone, be free from any kind of curse and his parents should be alive and well. The election of “Alaunoni” should be authorized by a feared and respected Maasai spiritual leader “Laibon”. During this period the new generation warriors transition from the youth stage and its affairs and enter adulthood. Apart from all that, it is a great honor when a warrior is elected, this leader of the Maasai warrior group of the new generation “Alaunoni” should be elected without knowing what is going on. It is an honor that every warrior wants. After being selected for the surprise “Alaunoni” he is usually given a bronze jewel folded “Insuritia” which is supposed to be hanged around his neck when worn with sheepskin. Two other warriors; one of them is the “Olabaroenkeene” whose bull was sacrificed by the “Olaigwanani” who was elected several years ago when the circumcision ceremony took place, together they will help the new generation leader “Alaunoni” to complete the whole Eunoto ritual in the next four days of the Maasai warrior ceremony.

The Maasai live in houses built of cow dung and with a flat roof. For a ceremony to achieve the status of a Maasai warrior ceremony, houses with a shaped roof get built specifically for these ceremonies called “o-singira”. The food prepared at the festival includes meat and milk, this food is eaten by all except the beers made from honey which are drank by the officials and gets store there. After the “o-singira” is built, the warriors and their elders go to the river and smear white chalk on their faces. This act is called enturoto. After the whole exercise is completed the warriors return to their villages singing, at this stage the new generation Maasai warriors have become adult warriors or experienced.

The most sensual aspect of the “Eunoto” Maasai warrior ceremony takes place the next day. New generation warriors get their hair cut by their mothers. For almost two decades the Maasai militants let their hair grow, decorate their hair and dye it with red clay. These hairs are shaved to show the end of their struggle, as a result of this action many fighters become irritable, trembling with rage and crying. Their youth is no longer with them, for now the warrior training alliance becomes the old thing that gave them a hand.

Finally, new generation warriors are ready to enter the process of adulthood, marriage, and family rearing. To achieve this the woman is selected from a respected family and get married to a new generation leader of the “Alaunoni”. Maasai girls get proposed when they are babies, because both parents want their children to have a partner with whom they can build a family. The boy’s parents send a gift to the parents of the baby girl, these parents continue to send the gift until the girl reaches the age of marriage. Yet no courtship is without limits. If a woman is chosen to marry a new generation leader, the “Alaunoni”, all old marriage plans are broken. This is done to protect the Maasai society.

New generation warriors are adults now, they can get married. Special “Manyata” villages built for the Maasai warrior ceremony and festivities are left uninhabited. As the sun sets the Maasai warriors who have entered another stage of adulthood return home and face the responsibilities of adulthood which includes marrying and raising a family.