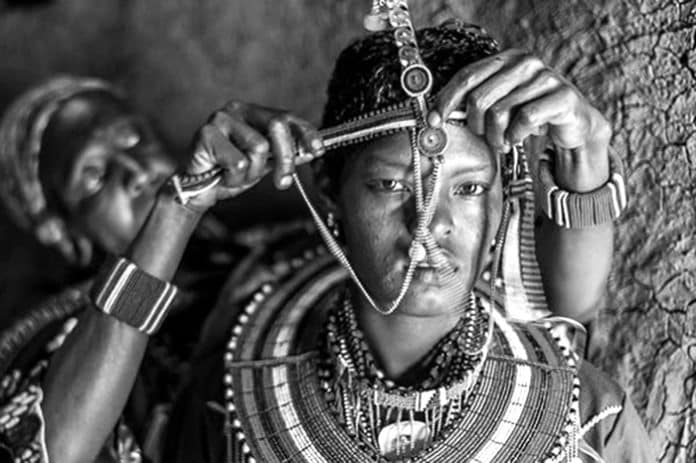 In the Maasai community, marriage is considered very important. When two people are united as husband and wife, these newlyweds are expected to live together forever; Divorce is not an option unless the dowry is not paid in full. However, because the facts regarding Maasai show that the group have started to marry with other tribes and communities, divorce has begun to be introduced gradually, but only for couples who are both non-Maasai.

Showing of the Intention

Maasai wedding traditions stand as one of the longest celebrations for the Maasai tribe. It starts with a man showing his need for a woman and giving her a Maasai wedding necklace called an olpisai. This word goes around with the family as well as the community waiting for the man to express his intentions. He does this by finding women of his own age who will send a gift of alcohol to the girl’s mother. This first step is called Esirit Enkoshoke, and it shows that the girl is already engaged. After a while, the man plans to make his intentions quite clear. This is done by presenting the gift of alcohol to the girl’s father, which will be sent by the same women who sent another gift of alcohol to the girl’s mother earlier. This alcohol is called Enkiroret. The bride’s father is expected to drink alcohol with his relatives, friends and then call the boy and ask him to express his intention and show the girl he wants to marry. (This can be a very important step as the elders may pretend not to know the girl they are looking for.) Once the family accepts the man’s request, both parties will form a formal relationship, which will certainly lead to the wedding taking place.

The man is now allowed to send gifts to the woman’s family. He starts by giving them a gift as long as he feels right, until he reachs the point where it will be obvious that they are satisfied with the stability and trustworthy situation of the girl’s family. These gifts will make the bride’s dowry, where the purpose is not to enrich the bride’s family but to legalize the marriage. In this way, the man puts a mark on the family, and if anyone else wants to approach the family and give a dowry, it is made clear that the girl has already been given to another family.

The Maasai wedding begins with the bridegroom bringing a dowry, which includes three cows, of which two are female and one is male and all are black, and two sheeps, one female and one male. The ram is slaughtered on the wedding day and its fat is removed, which will be applied to the Maasai wedding traditional attire. The remaining oil is put in a container for the bride to carry and take to her home, her husband’s barn.

Events After the Maasai Wedding

The ewe is given to the expectant mother-in-law and the intended husband. From that day on they will treat each other like “Paker,” meaning the one who gave me the sheep. There is also a calf that a man gives to his father-in-law. And from then on they will call each other Pakiteng or Entawuo. All gifts are stored in a calf house known as Olale.

That morning, the bride’s head is shaved and anointed with oil. The bride is adorned with Imasaa, which is a beautiful decoration of Maasai beads, and is placed in her wedding dress. The garment will be made by his relatives, not just the mother. In this way the Maasai wedding dress is a symbol of unity, not selfishness. The bride is blessed by the elders by using alcohol and milk, and is led from her family home to her new home, her husband’s home. There she enters into the house of her mother-in-law, where she lives for the next two days, in which the bridegroom shall not lie down with her nor eat any food in the house she is in. Finally, after two days, the wife’s head is shaved off by the man’s mother, and the ceremony is over. The man and woman now become married adults.

“Old age signifies a period of responsibility for a man and woman, from marriage, family building, and the pursuit of wealth and security in the form of children and cattle. But several social events, celebrations, and rituals also fill their lives. A suitable wife is usually chosen because of her traits, just as a wise and just man gains honor to his fellow man. In group ceremonies, women and men come to the fore, often in a fun and orderly procession, and greet each other with common courtesy and humility. Desired to be a role model for all young people, the Maasai adult looks and hopes in old age not to be isolated and  always afraid to continue further without being involved in people’s lives. ” -Tepilit Ole Saitoti