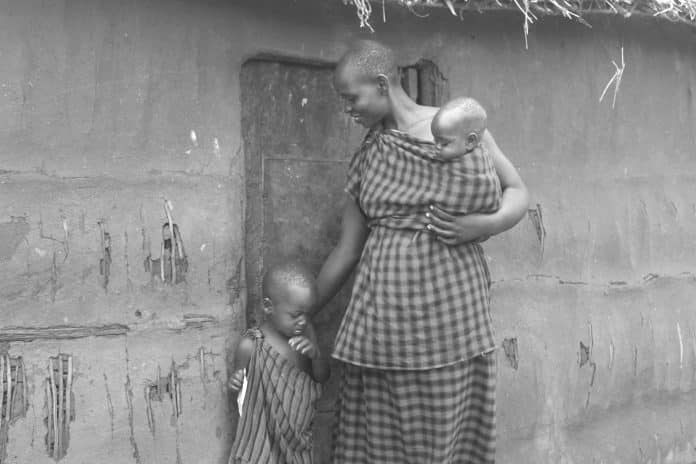 A pregnant woman in the Maasai community is served as a queen. Her food is prepared in such a way as to ensure both she and the baby stay healthy. The quantity and quality of the food that a woman eats during pregnancy is carefully monitored to ensure the mother and baby have great health. A pregnant woman is not allowed to drink cow’s milk directly; it is only at some point down the pregnancy that she can drink skimmed or frozen milk. Pregnant women also enjoy a special diet made from traditional herbal remedies for blood and stomach cleansing. Pregnancy is carefully monitored by midwives until the mother gives birth, after which the Maasai child is later raised by the entire community.

Giving Birth to a Maasai Child

When a Maasai child is born, the most important person to look after is the midwife. A midwife in Maasai culture has two main roles. The first task is to receive the baby and welcome him into the new world. Second, the midwife takes care of the umbilical cord and separates the baby from its mother. When she cuts the umbilical cord, she utters the following words “Now you are as responsible for your life as I am for my own.” These words warn the Maasai child entering the new world that he or she has come out of the comfort and protection of the mother’s womb and has now become a separate creature with a separate life of his/her own and now he/she must be responsible for own life in order to grow.

After the initial ceremony which ends with the burial after the woman has delivered, the mother at first gets fed honey taken from the local beehive. In addition, the father of a Maasai child or his representative goes to donate blood from a cow. How you donate blood from a cow depends on the sex of the baby. If the child is a boy, the father takes a rope, a bowl and

dull arrow and makes a mocking attempt to confuse the calf before getting the blood from the cow’s neck vein. If the baby is female, the procedures are reversed.

After the father or his guardian donates blood from the cow, there are blessings given to the house where the Maasai child was born. One way to bless a house and that is often used, is to slaughter a sheep or to use a “Cheu” (food eaten by cows / vomit) that is chewed by either brown or black sheep because brown or black is considered sacred in Maasai culture (Tip: explore our other article “An Inside of Maasai Baby Names and Ceremonies” to learn more about how Maasai names their babies).

A Day in the Life of a Maasai Child

When a Maasai boy reaches the age of four or five, his lower front teeth are pulled out. At this age the Maasai child’s most important job is to look after the family’s calves and sheep. At the age of seven, the upper right side of the baby’s ear will be pierced. Also during this time the baby begins to look after the older calves, and can join an older family member in herding cattle. at this age also a Maasai child can participate in children’s sports such as cow dung fighting and jumping. The children also learn various things taught from stories and proverbs.

At the age of sixteen or seventeen, the lower part of the boys’ ears are pierced. At this point, the boys are beginning to take on more responsibilities, such as moving sheep and cattle to new grazing lands. Girls on the other hand are beginning to cope with the responsibilities reserved for women such as fetching water, chopping wood and painting the house. Before boys are circumcised (the age at which boys will be circumcised depending on a boy’s maturity that can be between seventeen to twenty years and older) he is not allowed to put ornaments in his pierced ears and may not carry a white metal spear. However, he can adorn himself with olive branches and carry a “podo” (a bag of spears and arrows). Young Maasai girls also follow the same pattern as boys. Unmarried girls, dressed in black robes and a chain adorned with tiny peels, skin decorations are embroidered with ear piercings. Shortly before they get married, girls shave their heads clean.

Overall, this article hopefully provides you with a sneak peak of a Maasai life through a child’s eyes.