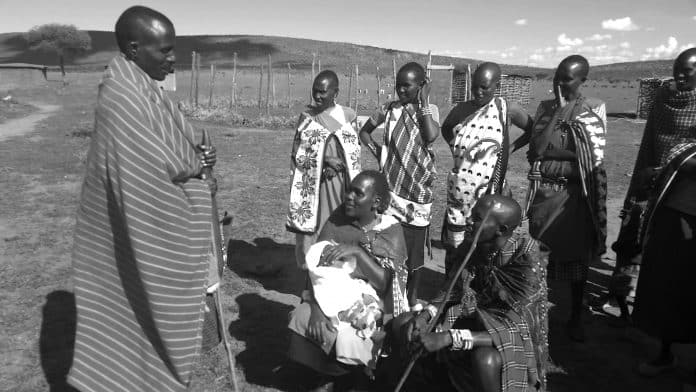 A Quick Inside Look of Maasai Baby Names and Ceremonies

When a Maasai baby is born, it is not given an official name, but is given a temporary name known as embolet, which means Opening and used for both Maasai baby boy names or Maasai baby girl names. From the day he is born, until the day the naming ceremony takes place, the baby will be identified by one of the cute Maasai baby names “embolet”. Maasai children vary in age when the naming ceremony takes place. Depending on the genealogy of their families, some of them may be as old as three years before the Maasai baby names ceremony, known as Enkipukonoto Eaji meaning from incarceration / isolation. In the run-up to the Enkipukonoto Eaji celebrations, the mother and baby sit inside and let the hair grow longer.

When the festivities begin, they come out and their heads are shaved, an act that is common in many Maasai rituals. Preparation for the unique Maasai baby names ceremonies takes up to two days and involves a variety of activities. First two sponsors, one for the mother and the other for the Maasai child, are selected during the ceremony. Each donor must be in the same age group as the mother or child and remain closely related to the family. Then two rams are selected, one of which is slaughtered and used as a stew during the festivities.

Only women are allowed to eat the meat of this lamb. This is done to please women and to try to compensate for the pain they feel during childbirth. Women also eat meat as a way of giving thanks to Engai, this is a Maasai word which means God, or the Supreme Being, for giving them the ability to bear children. The mother then places the Olkererreti, which is a bracelet made of sheep’s right leg, on the baby’s right hand. Then a special Maasai pumpkin is used to draw water from the river. The mother drinks this water when the Maasai baby names ceremony begins.

When the meat is ready and all the activities listed above are completed, the mother is given water in a pumpkin to drink, and the mother’s sponsor announces that the ceremony has begun. Some women coexist with the mother and her benefactor, then begin to evaluate the baby’s embolet and determine its new name based on the baby’s personality from birth. If most people like his temporary name, it is likely to continue to be used. Women bless the baby with his new name by saying “This name lives in you” and that new name, known as enkama enchorio, is permanent. Finally, the mother removes the baby bracelet and the ceremony ends.

The Maasai usually live in fenced family settlements known as forts and consist of a few houses and cattle. During the two days of the Maasai baby names ceremony, the mother of the child and the child are given the honor of being the sole authority to open and close the gate of the fort.