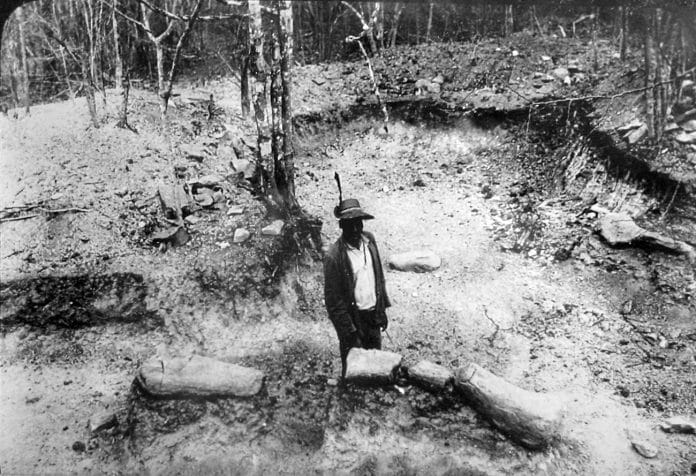 The Tendaguru Beds, also known as Tendaguru Formation, are an extremely fossiliferous formation and Lagerstatte found in southeastern Tanzania. Tendaguru represents the oldest known sedimentary formation in the Mandawa Basin. It overlies the Neoproterozoic basement, separated by an unconformity and long hiatus. The beds reach a total sedimentary thickness of over 360 feet (110 meters). The age of the beds ranges from the late Mid-Jurassic to the Lower Cretaceous, Oxfordian to Hauterivian stages, with the formation’s base possibly extending to the Callovian.

The Tendaguru Beds are divided into 6 members, from youngest to oldest: the Rutitrigonia bornhardti-schwarzi Member, the Upper Dinosaur Member, the Indotrigonia africana Member, the Mid-dinosaur Member, the Nerinella Member, and the Lower Dinosaur Member. The series is made up of a sequence of shales, conglomerates, and sandstones with small oolitic limestones dumped in a shallow aquatic to the seaside environment, characterized by lacustrine, tidal, and fluvial impact with a tsunami deposit existing in the Indotrigonia africana Member. The climatic condition of the Early Cretaceous and the Late Jurassic was semi-dry with occasional rains, and the global sea level was increasing in the Late Jurassic period from the low levels of the Mid-Jurassic. According to paleological reconstructions, during the last part of the Jurassic era, the Tendaguru site was found in the sub-tropical southern hemisphere.

In Africa, the Tendaguru Beds are regarded as the most endowed Late Jurassic lamina. Tendaguru has provided several fossils of many groups; many dinosaur genera, early mammaliaforms, flora, invertebrates, fish, amphibians, and crocodyliforms. Over 250 tonnes (280 short tonnes; 250 long tonnes) of material were transported to Germany during the early excavations done in the early 20th century. The Tendaguru’s faunal assemblage shares similarities with the Morrison Formation found in the central-western part of the United States. However, the additional aquatic interbed fauna found in the Tendaguru is absent in Morrison.

The Tendaguru’s dinosaur fauna is similar to those found in other fossiliferous stratigraphic units of the Late Jurassic like the Sables de Glos, Oxford Clays (England), Kimmeridge, Marnes de Belleville (France), Argiles d’Octeville, the Alobaca, Guimarota, and Lourinha Formations (Portugal), the Toqui Formation (Chile), the Morrison Formation, Canadon Calcareo Formation (Argentina) and the Kalazha and Shangshaximiao Formations (China) among others. They had similar counterparts like Stegosaurus and Brachiosaurus in the Morrison, and Kentrosaurus and Giraffatitan in the Tendaguru.

There is no sedimentary unit older than the Tendaguru Formation in the Mandawa Basin. It directly overlies Neoproterozoic basements comprising gneiss. It comprises an enormous hiatus, an absent stratigraphy sequence that spans the Early Jurassic, Paleozoic, and Triassic. Late Early Cretaceous sediments of the Makonde Formation overlays the formation unconformably. The sediments form the peak of many plateaus; Likondo-Kitale, Noto, Rondo, and Namunda.

Based on extensive paleontological and geological observations, Werner Janensch (expedition head) and Edwin Henning define the Tendaguru Beds (Tendaguruschichten) as a series of Late Jurassic to Early Cretaceous strata found around the site of the Tendaguru formation (named after the Tendaguru Hill).

The Tendaguru beds were dumped in the Mandawa Basin. The basin is a post-Karoo, Cretaceous rift basin found between the Rufiji Trough and Ruvu basin on the north and the Ruvuma Basin on the south. Early Proterozoic and Archean basement crop up to the west of the basin.

The major rift phase in modern-day southeastern Africa caused Madagascar’s separation from the then-linked Indian subcontinent. This occurred during the Early Cretaceous era. The Kilwani and Songo Songo gas fields are situated just offshore the basin.

During the Tendaguru deposition time, the area had a semi-dry climate with seaside interferences that maintained higher levels of moisture than experienced inland. The upper portions of the beds, particularly the Rutitrigonia bomhardti-schwarzi and Middle Dinosaur members, exhibited the prevailing semi-arid conditions with elevated dry seasons according to palynologic analysis. Throughout the Late Jurassic, the Tendaguru animal collection remained stable.

During the Early Cretaceous and Late Jurassic, the Gondwana palaeocontinent was splitting, and the breaking apart of the Gondwana and the Laurasian supercontinents was the result of the linkage of the Pacific Ocean and the proto-Atlantic with the Tethys Ocean. Also, the South Atlantic grew towards the end of the Late Jurassic once Africa and South America separated. From the Kimmeridgian period to the Early Cretaceous, marine barriers increasingly detached Africa from most of the other continents. However, the continental link with South America remained. Eustatic sea levels significantly dropped during the Early Jurassic era. It stayed low through the Middle Jurassic era but considerably rose towards the Late Jurassic, expanding the marine depressions between the continents.

The fossils and sedimentary rocks have a recurrent shift from shallow marine to flat tidal environments showing that the layers of the Tendaguru Beds were dumped close to a fluctuating strandline controlled by sea-level changes. The three sandstone-dominated Tendaguru members have a marginal marine origin. Conversely, the three dinosaur-bearing members are continental to marginal marine.

The sequences fining upward on the basal part of this member are interpreted as tidal channel fills, and the overlying claystone, fine-grained sandstone, and silt are interpreted as tidal flat deposits. Vertebrates and invertebrates are poorly known from the immediate surroundings of Tendaguru Hill, limiting the palaeoenvironmental interpretation of this member. The content of the land-derived sporomorph assemblage points to terrestrial vegetation dominated by cheirolepidiacean conifers and ferns

The ripple cross-bedded fine-grained stone and the small trough found at the base of the Tendaguru Upper Dinosaur Member are viewed as tidal flat deposits. Unfossiliferous sandstone found in the upper part was most probably dumped in tiny fluvial channels around a seaside plain, whereas argillaceous deposits were dumped in still bodies of water like ponds and small lakes. Uncommon occurrences of charophytes and Cypridae point to the influence of freshwater, whereas the intermittent occurrence of marine invertebrates is suggestive of a depositional environment lying close to the sea.

The crude sandstone of the lower portion of Tendaguru Indotrigonia africana Member that manifests highly changeable directions of transport is viewed as a large tidal channel deposit. Large scale, grain-size sedimentary structures, as well as the absence of ichnofossils and infaunal and epifaunal body fossils, point to frequent reworking and high water energy. The basal succession moves upward in cross-bedded sandstone, and minor siltstone and claystone that have lenticular and flaser bedding interpreted as tidal channel and tidal flat deposits. Low-angle to horizontal fine-grained, cross-bedded sandstone with additional bivalve pavements points to tidal currents operating in small flood and ebb-tidal deltas and along the shore. Successions of stacked trough cross-bedded, mild-to-coarse-grained sandstone of the upper portion of the Indotrigonia Africana Member are viewed as a tidal channel and deposits of the sandbar. In some places around Tendaguru Hill, these sediments interlock with layers of oolitic limestone, representing high-energy oval reefs.

In the Tingutinguti stream, the Tendaguru Indotrigonia africana member has several (up to 7.9-inch thick) badly sorted beds of sandstones. They comprise reworked concretions, mud clasts, and accumulations of thick bivalves(majorly Seebachia janenschi and Indotrigonia Africana) and exhibit mega ripple surfaces. This chain of layers of sandstones is viewed as storm deposits. In the Bolachikombe and Dwanika stream sections, as well as a small Bolachikombe creek tributary, a discrete (2.3 feet chunky)conglomerate found in the lower part of the member exhibits proof of a tsunami deposit. All in all, lithofacies, as well as the different microfossil assemblages and macroinvertebrates of the member, suggest a not-so-deep marine environment. As a result of the high supply of Classopolis and the various mesoflora, a close vegetated hinterland dominated by xerophytic conifers is suggested.

The sedimentological features of the basal part of the Tendaguru Mid-Dinosaur Member indicate deposition on tidal flats and in small tidal channels of a lagoonal paleoenvironment. The ostracod Bythocypric species from the member points to polyhaline to euhaline conditions. A little higher up, a faunal sample overlaid by the bivalve Eomiodon and an ostracod assembly made up of brackish to freshwater taxa is a pointer to a brackish water paleoenvironment with the different freshwater influx, as shown by the non-marine ostracod genus charophytes, Cypridea, and other freshwater algae. The paleoenvironment of the ostracod assemblies of the Tendaguru Mid-Dinosaur member altered upsection from a marine setting in the basal parts via alternating marine, brackish conditions to freshwater conditions in the higher portions of this member. The extremely sporadic occurrence, in this portion of the section, of mollusks usual of marginal marine areas, shows only a very weak marine influence, at sabkha-like shore plains with ephemeral ponds and saline lakes are recorded in the upper part of this member. This portion also comprises pedogenic calcretes that indicate subaerial exposure and the beginning of soil formation. The calcrete intraclasts within neighboring sandstone beds are proof of erosive reworking of calcrete horizons. The presence of crocodyliforms points to littoral environments and neighboring terrestrial areas.

As a fossil deposit, the Tendaguru Formation was initially discovered in 1906. Bernhard W. Sattler, a German mining engineer, pharmacist, and chemical analyst, was on his way to a mine located south of River Mbemkure in German East Africa (present-day Tanzania) when his native worker showed him large skeletal remains weathering out of the path close to the base of Tendaguru Hill, 6.2 miles south of Mtapaia. Due to its morphology, the Tendaguru hill was known locally as a “steep hill,” according to the local language of the Wamwera people. Sattler sent out a report of his discovery. The report made its way to german paleontologist Eberhard Frass, who was on a round trip to Africa at the time. Fraas visited the site in 1907 and recovered an enormous pair of incomplete skeletons with Sattler’s aid.

After the discovery of Tendaguru in 1906, different teams from the British Museum of Natural History, London (1924 to 1931) and the Museum fur Naturkunde, Berlin (1907 to 1913) commenced a series of collecting expeditions that remain unmatched in ambition and scope. Led by the influence and vision of geologist Wilhelm von Branca, the German expeditions were especially successful, largely due to the fact that the project was executed as an affair of national interest (Germany was a young country at the time, Otto von Bismarck had only unified it less than four decades earlier) and enjoyed the goodwill of many rich patrons. Eventually, close to 250 tonnes of bones excavated from Tendaguru hill representing a wholly new dinosaur fauna that remains the most understood assemblage from all of former Gondwana, were transported to Berlin, Germany.

The Natural History Museum, Berlin, did excavation works at Tendaguru hill and its surroundings for more than three years. Between 1909 and 1911, Werner E.M. Janensch led as the leader of the expedition with Edwin Hennig as an assistant. Hans and Ina Reck led the 1912 Tendaguru hill excavations. Other European members of the excavation include Hans von Staff. The scientists examined the colony’s geology in the rainy season.

A book written in Swahili whose title translates to Dinosaurs of Tendaguru was published in 1998 for young readers in East Africa. The book projects a slightly different, fictional tale of the initial discovery, which is not attributed to the German mining engineer Sattler; instead, it is attributed to a Tanzanian Tendaguru farmer.

Probable dinosaur eggs have been retrieved from the Tendaguru beds. The fauns found in the Tendaguru Beds have been compared to the Morrison Formation, many formations in England, among which are the Oxford Clay and Kimmeridge Clay, and France (Marnes de Bleville, Argiles d’Octeville, and Sables de Glos), the Guimarota, Lourinha, and Alcobaca Formations in Portugal, the Villar del Arzobispo Formation in Spain, the Toqui Formation in the Magallanes Basin in Chile, the Shangshaximiao, Shishugou, and Kalazha Formations of China and the Canadon Calcareo Formation in Argentina.