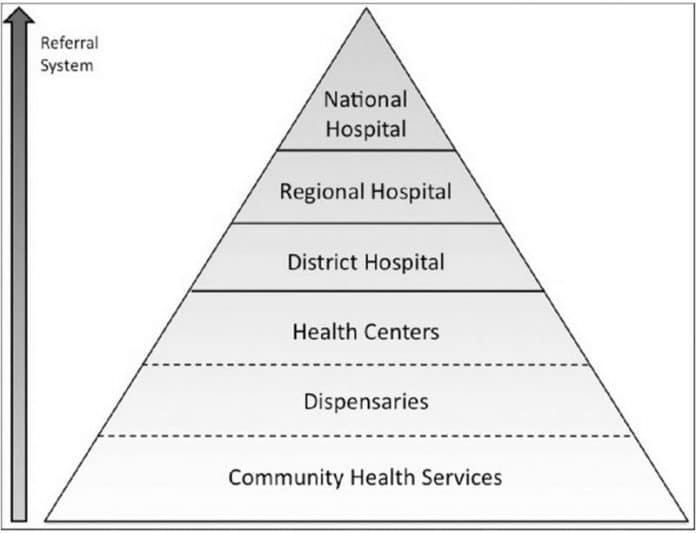 Structure of the Health System in Tanzania

Tanzania is an administrative union of Zanzibar and Tanganyika (mainland Tanzania). However, the National Health Policy of Tanzania only oversees the provision of health services to Mainland Tanzania. Mainland Tanzania has twenty-one administrative regions which are further subdivided into 106 Districts having 121 council authorities.  In this administrative structure, the Tanzania health system service provision is categorized into three levels of health care delivery system in Tanzania: National, Regional and District. Each of the districts is divided further into divisions, wards, villages and streets also known as mitaa/vitongoji in Swahili language.

The ministry of health Tanzania facilitates and supports the provision of the Tanzania health system services at the council level via the regional secretariat. The ministry adopts a pyramidal Tanzania health system organizational structure that operates vertically from the lowest level to the highest level. The services available at each level are listed below in ascending order.

Underneath the health care system in Tanzania is a socialist rule that defines specific responsibilities, functions and values to the government concerning the services it provides to the society. The health system of Tanzania considers the government as the main financier and provider of health services, with an emphasis on the delivery of primary health services.

The format of the Tanzania health system structure is decentralized, meaning it is framed explicitly by the country’s national health policy. The country’s National Health Policy seems to be influenced mainly by the goal of delivering quality primary health care accessible to all citizens. Primary health care has been the foundation of the National Health policy since the government adopted it.

The policy’s identification of resources and the focusing of those resources towards a vital health care package is comprehensively associated with the health-related Millennium Development Goals (MDG). The Tanzania health system and care package is an incorporated assembly of cost-friendly interventions that seek to manage the major diseases, risk factors and injuries in Tanzania, made up of: Child and Reproductive health, Control of non-communicable and communicable diseases and treatment of conditions that are prevalent locally within a district.

Promotion of community health and prevention of disease via sanitation of environment and health system management in Tanzania related to health services of occupations are also identified as chief components.

The responsibility of the private and public health sector is outlined in the National Health Policy, and defined and seen as a private/public partnership, in which the common objective of health provision should be achieved by working together in some situations. Although this vision of joint mobilization and sharing of resources exists, the Ministry of Health is tasked with regulation and coordination of the establishment of health institutions and the provisions of health care services by the private sector.

Health care delivery system in Tanzania, especially in rural regions and health facilities, was negatively affected following the economic recession that occurred in the 1970s and 1980s that led to a deterioration of health services. This prompted the government of Tanzania to introduce cost-sharing in 1993 and subsequently instituted other financing alternatives such as a Community Health Fund and a National Health Insurance. Consumer charges accompanied the institution of cost-sharing.

Even though some forms of health insurance provisions exist in the Tanzania health system, the coverage of commercial health insurance is extremely limited and there is an increasing trend of community-based pre-payment schemes. Insurance represents among the many and major challenges of health system in Tanzania. Therefore, the country is more known for its Community Health Fund (CHF) schemes, with the initiation of compulsory health insurance in the early 2000s making it mandatory for all public servants to join the National Health Insurance Fund (NHIF). The next stage envisions the expansion of health insurance to formal sector employees in the private sector through health insurance payments to the National Social Security Fund (NSSF). These policies aim to reduce or completely eliminate the many challenges facing health system in Tanzania by setting up a reliable means of facilitating workers to contribute towards their health and to improve the ease of access and the quality of health services provided both in the public and private sectors.

Generally, services in the Tanzania health system rely heavily on funding from the national government, with a number of funds based on tax via collection by local government councils and other incomes. Even though the national government is still the main source of funds for the health services in the country, the funding is also supported by voluntary agencies, faith-based organizations, local government and service provision, executive agencies, development partners and community contributions. There is a perspective of out of pocket funding under the community contributions, where communities may be motivated to donate via user charges in health institutions to supplement the financing provided by the government. The Community Health Fund (CHF) is seen as an effective means of rallying voluntary participation and involvement of the community in supporting their health. On the other hand, the Health Insurance Scheme is viewed as a means to ensure the health of employees in the formal sector is protected.

When comparing the state of the Tanzania Health system to other countries, table below shows that the health expenditure per capita has decreased since 2006, even though it is optimistic that the government expenditure has increased from 14 per cent in 2006 to 18 per cent in 2009. This suggests a switch of health expenditure from the population to the resources and infrastructure required for health provision. The government has therefore kept their promise in 2003 to allocate 14 per cent of the budget share to the health sector. Intriguingly, the out of pocket expenditure has risen as a percentage of private expenditure while declining in total.

Irrespective of the context where health care occurs, a standard way to ensure the country’s health is the availability of adequate quality human resources in the health sector. A decentralized Tanzania health system could gain from specific health service features provided by MLHWs because it requires dispersed access to HRH, together with the disease burden affecting mainly the periphery of the society.

For more articles related to Healthcare in Tanzania, click here!