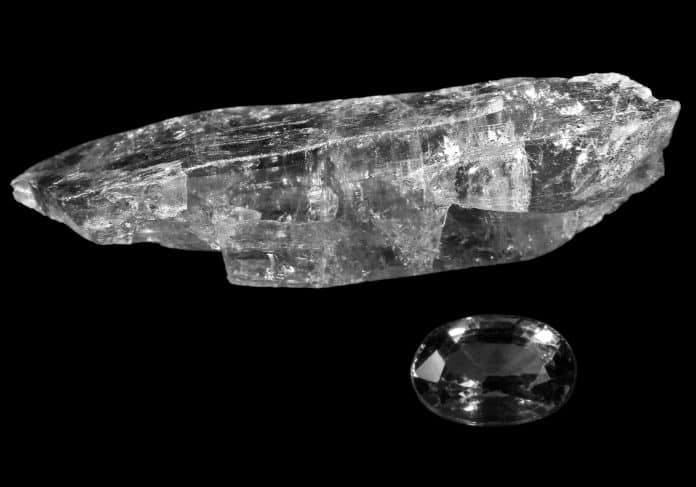 Tanzanite is a blue and purple type of mineral zoisite (calcium aluminium hydroxyl sorosilicate), which is caused by vanadium. Tanzanite falls under the group of epidote minerals. Tanzanite is mined in a very small area that is in Tanzania near the Mererani mountains, the mining area is about 7 kilometers (4.3 mi) long and about 2 kilometers (1.2 mi) wide and is the only place in the world where the mineral occurs naturally.

Tanzanite is also known for its strong trichroism, it has a blue, purple and burgundy appearance depending on the direction of the orientation of the crystal. Tanzanite crystal may also look different when observed under various lighting conditions. Blue is most clearly visible when fluorescent lighting is used and purple can be easily seen when observed under incandescent light. In its raw Tanzanite state, the mineral is reddish-brown in color or clear glass appearance and needs to be treated with heat to eradicate the “veil” of brown and reveal the blue – violet appearance of the Tanzanite gemstone.

The stone was nicknamed ‘tanzanite’ after its parent country, Tanzania, by Tiffany & Co. Its scientific name “blue-violet zoisite” did not seem consumer-friendly to Tiffany’s sales department, which commercially launched the Tanzanite gem in 1968. The American Gem Trade Association chose December birthstone Tanzanite in 2002 by making it the first alteration in their list of Tanzanite birthstone since 1912.

Geology of the Jewelry Tanzanite

Tanzanite was created about 585 million years ago in the mid-period of Ediacaran with great technological activity and extreme heat in what would later form Mount Kilimanjaro. The gemstone is found in a complicated geological environment, with deposits mainly located at the hinges of isoclinal folds. Because of this nature, Tanzanite properties derived from nature make it as one of the most unique minerals in the world and the reason why many people value Tanzania

Manuel de Souza, a part-time goldsmith and Goan tailor staying in Arusha, stumbled upon transparent pieces of blue-purple and blue crystals on the ridge near Mererani, 40 kilometers southeast of Arusha in July 1967. At first, he mistook the gemstone for Olivine (peridot), after discovering he was wrong he then assumed the Tanzanite stones were “dumortierite” (a blue non-gem mineral stone). Shortly afterwards, the minerals were presented to John Saul, who was a consultant geologist based in Nairobi and a general gemstone digger who at the time digging aquamarine in a region near Mount Kenya. John Saul, who later found ​​deposits of ruby in the Tsavo region of ​​Kenya, removed cordierite and dumortierite as a possibility and sent a specimen to Hyman Saul, the vice president at Saks Fifth Avenue in New York. His father sent the samples to the American Gemological Institute which rightly recognised the new gemstone as a variant of the Zoisite. Accurate recognition was also done by mining experts at Harvard University, Heidelberg University and British Museum, a University. However,  the first individual to obtain the right of identity was a Tanzanian geologist in Dodoma called Ian McCloud.

The stone was renamed tanzanite from its scientific name “blue zoisite” by Tiffany & Co, to maximise profits from the scarcity and sole location of the gemstone, and was of the idea that “blue zoisite” (which could be pronounced as blue suicide”) might not sell properly. Tiffany’s very first campaign announced that tanzanite was now obtainable in only two places: “in Tanzania and with the Tiffany company”.

Since 1967, two million tanzanite carats were mined from the country prior to the nationalization of the mines by the Government of Tanzania in 1971.

In 1990, the Government of Tanzanian divided tanzanite mining sites into four segments: Blocks A, B, C and D. Block A and Block C were allocated to major operators, whilst Block B and Block D were allocated to local miners. The lease to Block C was updated by the government in 2005 to TanzaniteOne for a price of Tanzanite stone mining license and lease of of $40 million.

The government of Tanzania instituted a law illegalizing the exportation of untreated tanzanite to India in June 2003. (Like several gemstones, the majority of tanzanite is processed in Jaipur.) The ban was introduced to try to stimulate the development of processing facilities in the region, thus uplifting the economy and recuperating profits. This ban was imposed for a period of two years, until such time when it only affected stones of about 0.5 grams. In 2010, the Tanzanian government prohibited the exportation of rough Tanzanite gemstones that exceeded 1 gram in weight.

TanzaniteOne Mining Ltd is under the ownership of Richland Resources. However, a law formulated in 2010 by Tanzania obligated them to grant 50% ownership to the Tanzania State Mining Company (STAMICO). In 2011 Production peaked 2,400,000 carats ( about 480 kg; 1,100 lb), grossing $ 24 million (this translates to Tanzanite price per carat of about $10).

In short, if you have been wondering if Tanzanite is valuable, the answer is yes it is definitely in competition against many other high-end minerals.

What Color is Tanzanite?

No universally standardized method of grading colored stones has been established. The Tanzanite Foundation, a non-profit subdivision of TanzaniteOne, has launched its own system of color grading. The scales of the new color-coding system split tanzanite hues into several shades, between brown-purple, indigo and bluish-brown.

The most common primary and secondary colors of tanzanites are violet and blue. Unprocessed Tanzanite is a trichroic stone, meaning that the light entering this anisotropic glass is refracted in different ways, with varying Tanzanite color absorption in every one of its three optical axes. Due to this phenomenon, several colors have been seen in various samples: shades of brown, red, orange, yellow, green, cyan, blue, violet, purple and indigo. After burning, tanzanite changes to dichroic. Dichroic colors vary from violetish-blue to blue and from violet to indigo through bluish – violet Tanzanite gemstone.

Clarity grading is hinged on the eye-clean standard, that is, the gemstones are considered to be flawless if there are no inclusions visible to the naked eye (assuming vision 20/20). The American Gemological Institute groups tanzanite as a Type I stone, which means it is typically eye-clean. Stones with visible inclusions are sold at a great discount (low price per carat of Tanzanite).

A brown crystal Tanzanite is the form the mineral is created as and is trichroic, meaning it displays three colors simultaneously – violet, brown and blue and purple Tanzanite colors. When heated, whether underground by metamorphic forces, or artificially, the burgundy or brown color is removed resulting in a dichroic stone with a more intense violet-blue color. Rarely, tanzanite burns to dark green, often accompanied by a secondary blue or violet color. These green tanzanites are relatively valuable to collectors, but they are rarely appealing to commercial buyers.

Treating by heating using the furnace is normally done between 370 ° C to 390 ° C (about 698 to about 734 ° F) for about 30 minutes. These gemstones should not be cracked or have bubbles, as they may break or cracks/bubbles may enlarge during heating by the furnace.

Some of the stones found near the surface during the initial days following the discovery (in what is now called the D block) were blue that did not require refinement by heat – probably as a result of wildfires in the region that burned underground rocks. This situation led to the notion that tanzanite from the “D block” was more valuable than those from the other blocks.

Since thermal insulation is the most widely used method, it does not affect Tanzanite price ranges, and finished gemstones are relied upon for thermal enhancement. The American Gemological Institute states that the heat source has not been geographically proven, but is thought to be due to its prevalence.

Tanzanite can be also exposed to other means of treatment. Recently, tanzanites that are coated were found and tested by AGTA and AGL laboratories. A thin cobalt layer, illuminated by X-ray fluorescence, had been used to improve color. It was found that “existing coatings are not permanent”, hence disclosure is required during a sale in the United States.

Pleochroism is a complex physical property where the stone appears to be multi-colored depending on the lighting angle. Tanzanite is pleochroic in nature. Tanzanite blue display is the most appearing color when seen from one side but may vary from red to purple when viewed from different angles.

Its physical characteristics can make the process of cutting difficult because of the challenge of choosing the best color. The gemstone’s final color varies according to how the cut stone is illuminated by light.

Imitation and tanzanite coated with cobalt

As of 2020, tanzanite is yet to be successfully replicated in laboratories, so all tanzanite is usually found naturally. However, due to its scarcity and  demand in the market, it has been cloned in a number of ways. Some of the materials utilized are synthetic spinel, cubic zirconia, colored glass and yttrium aluminium garnet. A stone test using a dichroscope is used to distinguish this clone from real tanzanite, as real tanzanite will appear to have two refractions: two dichroscope viewing windows will show different colors (one blue window, another violet), while clone stones will show a single refraction and both windows will display the same color (violet).

Artificial forsterite is also marketed as tanzanite as it gives a similar appearance. There are three ways of distinguishing it from tanzanite. The first method is by the use of a refractometer: tanzanite shows a high index of 1.685 to 1.707 while forsterite shows a lower index of 1.63 to 1.67. The second method is to use Hanneman’s filter: real tanzanite appears orange-red, while forsterite appears green through this filter. The third method is by examination of the cut stone’s crown planes and looking at the reduction of the pavillion behind the stone with a standard jeweler’s loupe: forsterite exhibits birefringence, thus making the cuts on the pavillion look “doubled up”, whilst the significantly lower tanzanite birefringence does not show this property.

The lower tanzanite grades are sometimes often amplified using a cobalt layer which provides a stronger blue shade. The layer of cobalt does not stick well to the gemstones, and rubs off with time, resulting in a pale colored stone. Although still tanzanite, the use of cobalt coatings is seen as deceptive if not properly advertised.

In conclusion, if you have been thinking about Tanzanite wedding rings for her, this article will be your best start for both choosing the quality ring and also venture into the business of Tanzanite if you have funds to do so.