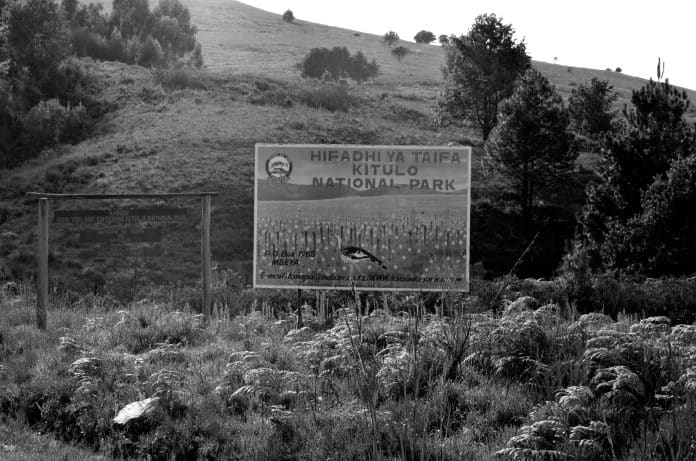 The Kitulo National Park is located in Tanzania’s southern highlands. It is a protected area on the Kitulo Plateau covered with montane grassland and forest. The Park’s elevation is 2,600 m (8,500 ft) between the Poroto and Kipengere mountain peaks. It covers 412.9 sq km (159.4 sq mi) of land within the Njombe and Mbeya regions.

TANAPA (Tanzania National Parks) administers the Park. Kitulo National Park is also tropical Africa’s first national park established with the primary aim of protecting its flora. Local residents refer to the Kitulo Plateau as Bustani ya Munga, which translates to the garden of God. Botanists refer to it as the Serengeti of Flowers.

Establishment of the Park

In response to an increase in the international orchid tubers trade, hunting, and lodging activities in the surrounding forests, the protection of the unique flora on the Kitulo Plateau was proposed to the WCS (Wildlife Conservation Society). Former President Benjamin Mkapa announced the establishment of Kitulo National Park in 2002, and in 2005 it was formally gazetted. Kitulo National Park became Tanzania’s fourteenth national park. TANAPA announced that there was a possibility of expanding the Park to cover the neighboring Mount Rungwe forest grounds.

The Kitulo National Park Plateau is located between two parallel ridges. During its wet season from November to April, the montane grasslands are covered with 350 different plant species. These include many ground Orchids, Afroalpine plants, and Geophytes. Some of the plant species are limited to nearby highlands and the Kipengere Range. Brachystelma Kituloensis, Pterygodium Ukingense, and Impatiens Rosulata are limited to the Kitulo Plateau.

The Livingstone Forest is the largest forest block in the Kipengere Range and the Park. It is evergreen and descends on the southwestward slope of Kitulo National Park. Bamboo thickets (Yushania Alpina) are found between the high-elevation grasslands and the upper montane forests.

The Forest lies within the former Livingstone Forest Reserve, which covers 240.34 km2. It was incorporated into the Park in 2005. The Livingstone and Mount Rungwe forests are separated by a narrow corridor of tree plantations and farms known as the Bujingijila Gap.

WCS scientists discovered a new primate species in the Forest area and around Mount Rungwe in 2005. Originally known as the Highland Mangabey, it now goes by the Tanzanian name of Kipunji and is on the list of the 25 most endangered primate species globally.