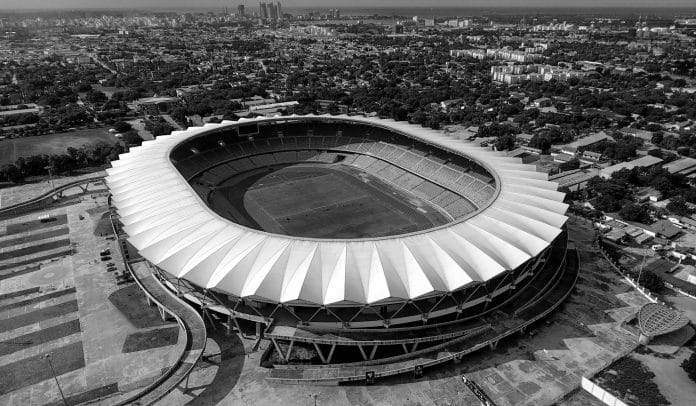 The multipurpose Tanzania National  Stadium or Benjamin Mkapa National Stadium, is situated in Dar es Salaam, Tanzania. This stadium opened in 2007 built next to Uhuru Stadium, what used to be the national stadium. Various major matches are played here like the Tanzanian Premier League and the Tanzania national football team’s home matches.

The first derby between Young Africans S.C. Simba S.C. filled the stadium to capacity in 2008. These clubs usually draw poor attendances during matches of other leagues.

By 2000, President Benjamin Mkapa pledged to construct a modern stadium before his tenure ended in 2005, arguing that lacking a modern stadium was shameful for Tanzania. By January 2003, the state publicized a tender for constructing a new stadium as a replacement for the Uhuru Stadium in a poor state. Juma Kapuya, the sports minister revealed that the government had budgeted $60 million with 11 companies bidding for the project.

By 2004, Vinci Construction from France submitted a bid worth $154 million and won the tender. Tanzania reluctantly gave up the project following pressure from Bretton Woods Institutions after receiving debt relief as part of the Highly Indebted Poor Countries Program. In her book The Dragon’s Gift: The Real Story of China in Africa, Deborah Brautigam noted that the Bretton Woods Institutions saw constructing a state of the art stadium in a poor nation having $330 as per capita income annually like the Romans constructing a new Coliseum while the barbarians are camping by the city wall.

By June 2004, Jakaya Kikwete, the foreign minister signed a $56 million agreement with the Chinese Government for a grant worth about $20 millions. An official from the Chinese Embassy called it a “special aid project”. The contract was awarded to Beijing Construction Engineering Group. The International Monetary Fund disapproved the expense as it had not been part of the country’s yearly Public Expenditure Review given to main donors.

The Benjamin Mkapa National Stadium was at the finishing point during the 2008 Summer Olympics torch relay that took place in Dar es Salaam. The torch’s only stop in Africa was Tanzania. Jakaya Kikwete, the president of Tanzania and his Chinese counterpart Hu Jntao inaugurated the stadium on the latter’s state visit to the country in February 2009.

The pitch size is 105 by 68 metres wide to match standards required by the Tanzania football federation and Fédération Internationale de Football Association (FIFA).

The project’s Phase Two will require constructing a warm-up ground, sports college/village and an indoor stadium.

BET365 Tanzania: Everything You Need to Know