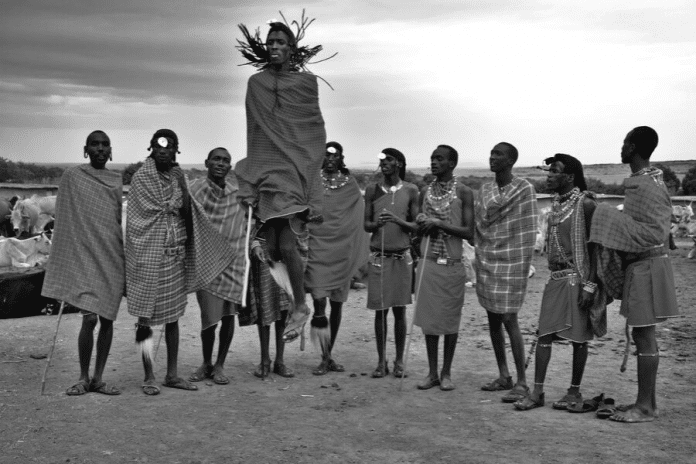 According to many credible studies, in numbers there are not less than 120 different ethnic groups in Tanzania who are people of African descent, most of whom are grouped together in large groups. Because of the effects of migrations from rural to urban areas, westernization, and politics, various of the smaller ethnic groups in Tanzania have been slowly going away from existence.

The Beginning of Ethnic Groups in Tanzania

At the beginning of 5000 years before this era (bce), San hunting groups settled in the country. This group is believed to be direct

descendants of the Sandawe hunters in northern Tanzania Mainland. By 1000 years before this era (bce), agricultural and pastoral activities were established through the migration of the Cushite people from Ethiopia. The Gorowa, The Iraqw, the Burungi, and the Mbuguare are of Cushite descent. About 500 years ago (ce), Bantu metalworkers who were also agriculturalists arrived from the west and south, began to relocate or replace San hunters and collectors; meanwhile, Nailotic pastoralists invaded the area from Southern Sudan side.

These days majority of ethnic groups in Tanzania are descendants of the Bantus; for example the Sukuma people – residing in the northern side of the country, Lake Victoria southern zone – represents the biggest tribal ground in Tanzania.

Another Bantu descendants consist of the Nyamwezi, based in the midwest region; The Hehe, who are in the highlands of the south of the country and the Haya in the north western region; the Chagga who live in the southern mount Kilimanjaro slopes, and Makonde, locate in the regions of Ruvuma and Mtwara country’s southeast. The Nailotic people – consisted of the Maasai, Arusha, Samburu, and Baraguyu – resides in Tanzania’s northern central part. The Zaramo, a very mixed and is a well urbanized group, form another tribal

and influential tribe. Majority of Zaramo people resides in the city of Dar es salaam and areas along the coast. Meanwhile, the Zanaki tribe which is one of the smallest is found close to Musoma, a region in the Lake Victoria zone.  Mwalimu Julius Nyerere, who is regarded as the father of the Tanzanian nation and the first person to become president (between year 1962-85), was a native of this tribal group.

There are also Asians and European communities in some extent. Throughout the period of colonialism, migration of Asians was highly promoted, incentive that allowed Asians to dominate trade in terms of domestic production in the country. Originally from Gujarat in India, they created various groups: Ismāʿīlīs, Bohras, Sikhs, Punjabis, and Goans. However, from the time independence was acquired, the Asian population has declined sharply due to immigration. The population of Europe, was never big because Tanganyika was not a colony of settlers, but the European ethnic groups in Tanzania were composed mainly of the British, German and Greek societies. Soon after Tanzania got its independence, there was a big migration of Europeans, North Americans, and Japanese which was tied to numerous foreign aid projects that were going on in the country. These groups made Tanzania their temporary residence.

The opposite to a lot of other African countries, Tanzania has no single culturally or politically dominant ethnic group, although groups that gained Christian missionary influence and Western education during colonial times (especially the Chagga and Haya) are well represented in government administration and financial economy.

The islands have numerous groups of Africans present. Bantu groups that are indigenous, include the Pemba in Pemba and the Hadimu of Tumbatu in Zanzibar, have inherited settlers who came from Persia during the 10th century. These ethnic groups together with some of the slave generations named themselves the Shirazis. There is also a bit of a population of ​​Comoros and Somalis. Arab settlements were introduced too right in the beginning, whereby a lot intermarriages with the natives occurred. The arrival of the Arabs in the 18th and 19th centuries were mainly from Oman which consisted of many elites. Most of immigrants from Omani who entered Zanzibar in the start of the 20th century were somewhat rich. Asians made up a very small number of the population.