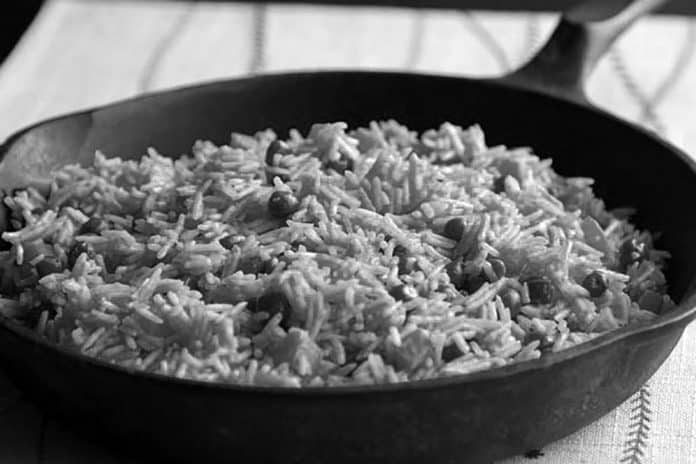 A recipe for the United Republic of Tanzanian Coconut Rice and peas mixed with carrots [Wali Wa Junde Na Karoti]! Rice and peas with sliced carrots are cooked in coconut cream with turmeric powder.

Coconut Rice [Wali Wa Nazi] is widely consumed in Tanzania and other Eastern African countries. The United Republic of Tanzanian Coconut Rice and Peas alongside Carrots [Wali Wa Junde Na Karoit] is yellow coloured with turmeric flour and blended with peas and sliced carrots before being cooked in dissolved coconut milk.

This rice and peas combination goes well with curries and stews, but it can also be eaten alone as a light dish.

I utilised a cup of cold carrots and peas for a convenient and simple lunch. For consistent cooking and uniformity, dice fresh carrots to nearly the similar size as the peas.

This meal is traditionally cooked with handmade coconut milk (in Swahili: maziwa ya Nazi) made from grated coconut. Before adding the ingredients to the hot water, shake the tin can or stir them thoroughly.