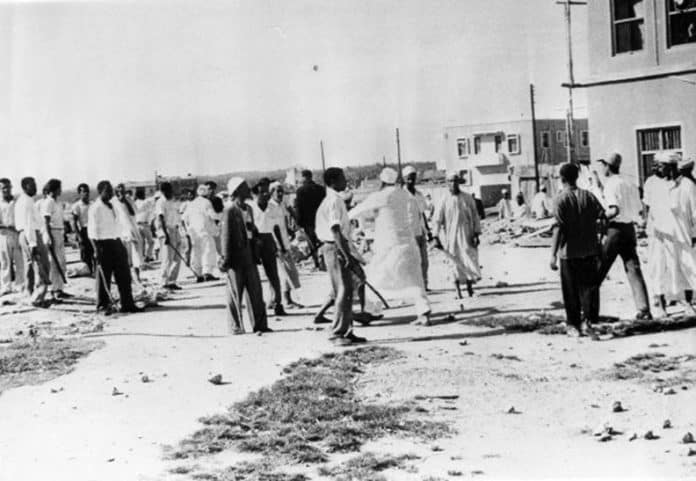 The 1964 Zanzibar Revolution: Historical Narrative by the Victims

The victims of the Great Crime of the Revolution that was orchestrated by John Okello and the following years today are in their sixties, or more. Most of them have some deep historical narrative about the Zanzibar revolution in their memories with those within their social circles only. Memories of the dark years,

during the time which catastrophic memories were extreme and when accusations were commonplace, often leading to arrests and interrogations, sparked personal precautions and rescuing one-self. Salum, an informant who was over seventy years old at the time of the interview, said that, even today, he has not put anything at home that can be a problem in the eyes of the ruling government. He has systematically eliminated all traces of the past and has removed all things that can betray his activities or his political beliefs.

From the historical narrative of those targeted by the revolutionaries, who are Arab families that used to be considered foreign in the days of the mid-January 1964 revolution in Zanzibar (Read more on the article “The Start of Identity Politics on Zanzibar People” to understand how race and identity played part during this period), they always talking about fear, violence, and death. Othman *, an Arab man in his late 70’s, talks about how he fled from his home on the evening of January 11, accompanied by his children but had to leave his frightened wife behind. They sought refuge with his parents, near Stone Town, Neighbors and Shangani. Othman * remembers the streets littered with corpses and dismembered parts he encountered along the way. The small family remained in hiding for a whole week when the curfew was issued, their intestines were closed for fear and a small meal (eating less). When he finally returned home, he learned that his wife had been killed. In his own words, pictures will remain forever in his memory.

Salma *, a woman in her fifties who is an Omani-born father and an Iranian-born grandmother who was living in Zanzibar during the sultan’s reign, describes how her family, mentioned about the danger they experienced together with a Swahili concubine of her father, they sought refuge in the homes of close friends. She remembers seeing, through a window, people being killed and pregnant women having abortions.

Similarities of the Revolution’s Historical Narrative Among Victims

Many historical narratives collected during field work repeat the same theme: people fled, hid, feared. If the memories of the revolution evoked a narrative of personal experience, which is often thought of by the victims themselves as a collection of photographs written in the memory of an individual, the commemoration of the following years of the Revolution reflects a general state of oppression, while everyone remains cautious of the possibility of revenge. Othman * remembers vividly how violent mediation was a part of everyday life: -If someone hates you, he only takes a gun, yes! A climate of mistrust was commonplace in everyday life, a situation that undermined social peace.

Among former prisoners, the pain of detention and torture has left scars on them. Ngwali Usi, a refugee who was imprisoned in 1972 for ten years for helping another prisoner escape, described the dire situation during his detention: -People came out of prisons in really bad status. We were like animals. When the food arrived, you ate like an animal. According to Hussein *, who was imprisoned from 1972 to 1978

between the ages of 23 and 29, the most common words were: – Less food, more salt, no medicine. Poor treatment and torture completely finished inmates who were already weakened by malnutrition and suffering from health problems caused by excessive salt intake. Some prisoners were tortured until they lost consciousness. Prisoners considered enemies of the government were brutally treated. Hussein * says how a former member of the Umma Party who survived his ordeal was imprisoned after Karume’s assassination in 1972, he was handcuffed day and night. He was repeatedly tortured. Hussein * narrates with admiration for the prisoner’s courage as the man never cried or apologized: – He never said, Mother, my God, have mercy! Even once. And while Hussein was providing his own historical narrative of the events, surprisingly he was also showing a proof that prisoners maintained a certain sense of humor and modesty during their ordeal, although the general opinion presented was that years of detention were years of physical and moral torture. Private deportation was tolerated by many prisoners released under the presidential pardon in 1978 which was the same as double pain. Others left their families behind in Zanzibar, only seeing each other when visiting the islands in secret. Those who claimed innocence of the crimes they were still charged and left with ton of agony. As Ngwali Usi testifies, his political involvement never bore the fruit he expected: -Why did they arrest me? I was so dedicated! I regret now because I did not receive the awards I was expecting.

The Aftermath of the Revolution Memories

This historical narrative from the victims of Zanzibar revolution in terms of their own living experiences attest to the fact that these memories are vivid and hurtful even today because the perpetrators and witnesses of the Revolution and the authoritarian leaders after the revolution are still alive. The close proximity of these traumatic events bring memories that are secret, personal, family or collective, but nevertheless generally restricted to victims when they want to remind themselves of these events and their peers who went through the same events; These records are not publicly published by any form of media. It is known that rejection is a common phase in the transformation of disaster records. Victims tend to hide their memories of disasters and therefore their identity has become increasingly difficult. In this case, the historical narrative presented here agrees with the claim that if records of past events are narrated or shared among people of the same generation, they are very rarely related to or include the survivors’ children. Like those who oppress them, they grow old in peace, unhindered by any need for repentance. However, in the case discussed here, this phase of rejection which is common to references of violence in the world, it must be understood in a specific context that this was an official order to silence the people by the government of Zanzibar. The wall of silence built against the fabrication of individual or collective historical narratives states that, with the exception of very few, often the majority of victims of the dark ages are not new producers of memory, but rather their children, who today are forty years old, are the ones who give those records. The emergence from the phase of forgetting events related to the revolution and the Abeid Karume years is the result of the experiments of those who consider themselves the heirs of the former victims of oppression of the Islands. Despite the horror and silence, a number of fragments or open records have been passed from one generation to the next and, in the modern context of greater freedom of political expression, these records provide a true story of the ancient catastrophe on the islands.