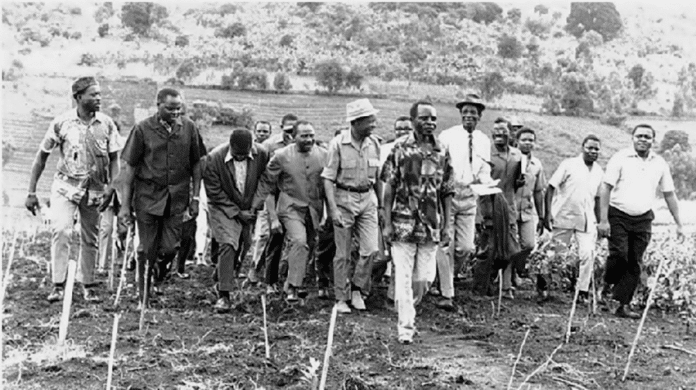 The Arusha Declaration: PART THREE – The Policy of Self Reliance

TANU is involved in the fight against oppression and poverty of our country to change the lives of the people of Tanzania, help people overcome poverty, and live a life of prosperity through its policy of self reliance.

We have been tortured, exploited, and neglected to a great extent due to our weakness. Now we need a revolution that will end our shortcomings, not to be controlled, oppressed, or humiliated again.

Poor people do not use wealth as a weapon. We used weapons that were not appropriate for our struggle because we used money as a weapon of choice. We aim to make up for our financial shortcomings by using guns or weapons that are financially powerful – which we don’t possess. In our thinking, actions, and words, it appears that we have concluded that we cannot accomplish the revolution we want without money. It’s as if we’ve declared, ‘Money is the pillar of development.’ It cannot be established without money.’ This approach is a million miles away from our policy of self reliance.

That’s what we acknowledge right now. Leaders of TANU and government officials emphasize becoming financially independent. NUTA, UWT, TAPA, Parliament, cooperatives, and other organizations in TANU pray and believe in money. However, a situation like this tells us that we can only keep going if we have money; we cease to move on without it.

In brief, we aim for more food, a reasonable education rate, and improved quality of healthcare in our five-year development plan and want to have 100% self reliance for our country; but we have emphasized money as our weapon. It is the same as saying, if we want more food, more education and better healthcare in the next five years, we have to spend 250,000,000 Euros to get it ‘. We believe that money is the only necessity, and whatever we want to use in our efforts is insufficient.

When some other MP asks the government about the lack of roads, hospitals, and schools, he also hopes to hear from the government that it has some plans to develop it in his state- with MONEY.

Whenever a TAPA official talks to the government about schools that do not receive any government assistance, he is hoping that the government will say that it is willing to provide the necessary aid tomorrow morning- with MONEY.

Whenever a cooperative officer talks to the government about the problem facing farmers, he hopes government to help the farmers – by using MONEY. This is because money seems to be the ultimate solution for everyone in any situation in the country.

Every year, each government ministry estimates its spending, for example, the amount it will need in the following year for recurring and development expenditure. However, only the finance ministry provides an estimate of all revenue.

Now when talking about self reliance while facing the issues such as above, it is important to ask ourselves one main question; what does it mean when the government says it doesn’t have any money? This indicates that Tanzanians do not have enough funds. They pay taxes from the small properties they own; the government uses these taxes to fund recurring and development expenditures. When we ask the government for investing more money in development programs, we expect it to spend more. If the government runs out of funds, it can only raise revenue through higher taxes.

If you ask a government to spend more than the budget, you are asking to raise taxes. It’s like asking the government to perform miracles by asking it to spend more without raising taxes. This is just like expecting surplus milk from a cow, even though you know that you cannot milk it again.