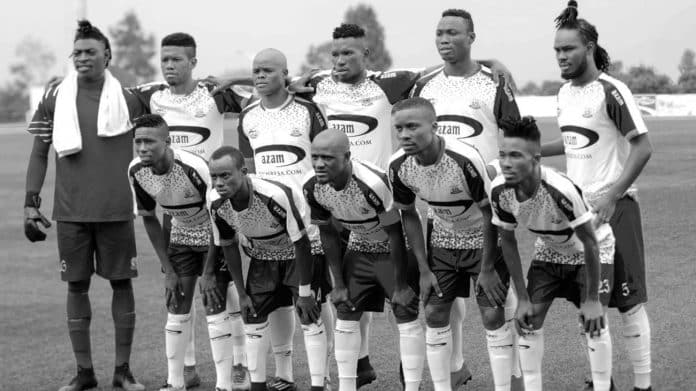 Azam FC was created on July 23, 2004, under the name Mzizima FC. It was founded by the employees of the Mzizima milling plant for wheat flour, which is controlled by the Said Salim Bakhresa (SSB) cluster of companies and is located at Banda la Ngozi on Nyerere Road, in Dar Es Salaam’s Ilala.

They needed a training area and approached Tanzania Railways Limited (TRC), who agreed to let them utilize the open space located at Ilala Goods Shed. The job of leveling the land began right away after being given the go-ahead by TRC.

They named the stadium ‘Surulele’ inspired by the iconic National Stadium in Nigeria’s Lagos, where the Taifa Stars competed in the 1980 AFCON.

Mzizima FC entered the official league in 2005 after entering division four, having played friendly matches only. Division four is the lowest official league in the football pyramid of Tanzania, and it is organized by the football associations of several districts. Mzizima FC, based in the Ilala area, participated in the Ilala District League, organized by the District Football Association of Ilala, which was held from 1st to 28th May, at Benjamin Mkapa Secondary School pitch in Ilala.

Mzizima FC advanced to the final, where they defeated Ndanda FC from Misheni Kota, Dar e Salaam’s Kariakoo 2-1, with Mussa Lumbi scoring a brace, with the Ilala MP Hon Mussa Hassan in attendance.

SSB’s Managing Director, Mr. Bakhresa Abubabar, presented the Azam FC formerly known as the Mzizima FC squad with a check for 330,000/= as prize money for winning the tournament.

In the 2006 season, Mzizima FC was promoted to the regional league of Dar es Salaam (tier three) as a result of the win.

Other industries owned by SSB also had their football teams. In 2005, all the teams agreed to unite with Mzizima SC in order to make a stronger club, following the advice of Abubabar Bakhresa. The teams included TAZARA – Buguruni (Mineral Water Industry & Wheat Flour Milling), Kipawa (Bakery & Biscuits), and Vingunguti (Omary Garage & Packaging).

They opted to hold a tournament for all the teams in order to assist in choosing players for a new team. The tournament was held at Ukonga’s Airwing ground. Kipawa FC and Mzizima FC qualified for the final. However, the game was called off after Kipawa challenged the referee.

After the contested competition, each team kept its status, but after some time, some players deserted other teams to join Mzizima FC in response to Mr. Abubakar Bakhresa’s demand. Id Abubakary and Luckson Kakolaki of Kipawa were among them. This resulted in Mzizima SC being stronger and the other teams becoming weaker, and they eventually gave in and agreed to unite with Mzizima FC and form a single team.

Azam is the umbrella name of the SSB group of firms, therefore the newly established squad took on the name Azam Sports Club on October 28, 2005.

Azam FC was promoted to the regional league of Dar es Salaam (level 3) after winning the championship in Ilala District (level 4) in 2005. The regional competition, however, proved to be a challenge for the Azam FC team, which was wholly made up of company employees.

There was a need to strengthen the team, which necessitated hiring fresh players besides the company’s employees. The new players were instrumental in the team’s promotion to the 2nd level for the 2007 season. But it began another era, as the Azam FC club started to pay players money just for playing football, signaling the club’s professionalization.

Azam Sports Club became a fully professional club on June 6, 2006, and commemorated the transition by eliminating the word “Sports Club” and adopting “Football Club.” The club’s official name has been Azam Football Club since that day.

These players strengthened the team by bringing a wealth of international and local football expertise.

Tanzania Football Federation (TFF) stated in April of 2006 that the league calendar and system would be changed beginning in 2007. The old calendar, which ran from January to December, would be replaced by one that ran from August to May. TFF arranged a mini-league (LIGI NDOGO) to acquire representatives in African events for 2007 (since CAF still employed the February to November calendar).

As a result, when the 2007 season began, Azam FC was forced to go back to the district level from division two in order to compete in the new tournament. Azam FC began its matches in the Ilala District, where their first match was against Cosmopolitan at Benjamin Mkapa Secondary School, which they lost 2-0. John Bocco, aged 17, scored all of the goals.

Azam FC eventually qualified for regional competition and signed Bocco then enrolled him in the team for the remainder of the season. They also signed 16-year-old Salum Abubakary alias ‘Sure Boy’.

Azam FC made it all the way to the national level for the promotion play-offs. Musoma and Dodoma served as play-off centers, with Azam FC based in Dodoma.

The teams in their group were Mbagala Market, Uyole Mbeya’s Kijiweni FC, and Majimaji FC. Mbwana Samatta, who was 17 years old, was part of the Mbagala Market team. They drew with Mbagala Market in a tight match, and it served as a reminder of two previous regional encounters, both of which ended in draws.

That marked the start of a fierce rivalry between Mbagala Market and Azam FC. The first team to defeat Azam FC at their stadium, Azam Complex Chamazi was Mbagala Market, currently known as African Lyon. After two wins (2-0 over Majimaji and 3-0 over Kijiweni) and a stalemate draw with Mbagala Market, the Azam FC was promoted, having gained seven points.

The club’s promotion was confirmed on 27 July 2008, when John Bocco scored two free-kicks in a 2-0 win against Majimaji FC.

Players Out on Loan