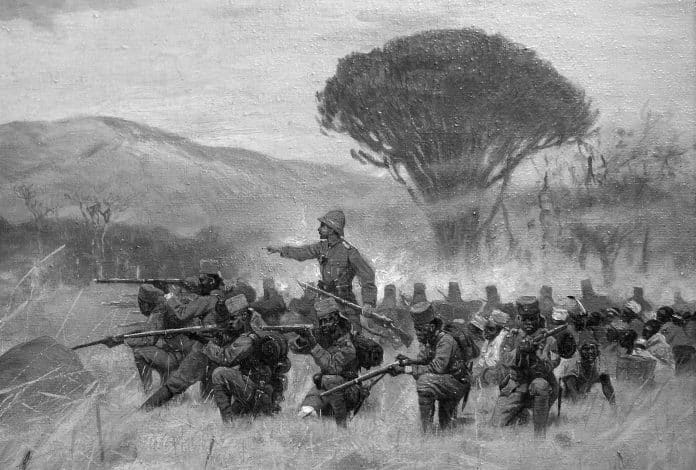 Maji Maji Rebellion – Causes, Effects and Why It Failed

Known as Maji-Maji-Aufstand in German or Vita vya Maji Maji in Swahili language, the Maji Maji rebellion was an armed revolt of animist and Islamic Africans against colonial rule in German East Africa (EA) or present-day Tanzania. The German policy of forcing the natives to grow cotton for export triggered the war between 1905 – 1907, where 250000 t0 300000 people lost their lives.

After European powers shared Africa amongst themselves in the 1880s, the Germans reinforced their hold on various African territories. These included German Southwest Africa (modern-day Namibia), German EA (Rwanda, Tanzania, Burundi, and a part of Mozambique), Cameroon, and Togoland (parts of present-day Togo and Ghana).

Germany’s authority in EA was relatively weak. Nevertheless, it kept forts across the interior of their domain and exerted some control. With a weak hold on the territory, the Germans turned to violent, repressive methods to put the population under their control. Germany put in place head taxes by 1898. It mainly relied on forcing the natives to construct roads and accomplish multiple other tasks.

Carl Peters commanded the villages to cultivate cotton for exporting in 1902. Every village had to produce a particular amount of cotton. Village headmen were to oversee the cotton production, setting them on the wrong footing with the masses.

People hated the German policies since they had severe impacts on their lives. Society’s social fabric was rapidly changed. Social roles of each gender were reversed to fulfil community demands. With men forced to work away from their families, women now had to take on the traditional roles of men.

Additionally, the absence of men strained available resources in villages, including the people’s ability to manage their environment and sustain themselves. By 1905, the region was attacked by a drought. The growing opposition to German labour and agricultural policies led to a rebellion in July.

Native warriors relied on magic to expel the German colonialists as a unifying force and motivation for the revolt. Kinjeketile Ngwale was a spirit medium who practiced Folk Islam incorporated with animist beliefs. He alleged possession by Hongo, a snake spirit. Ngwale started referring to himself as Bokero and told people in German EA to expel the Germans.

According to German anthropologists, the spirit medium gave out war herbs claiming that it would make bullets from the Germans turn into water. The “war medicine” was actually water or Maji in Swahili) and millet seeds with castor oil. Bokero’s followers started what became the Maji Maji Rebellion with the new liquid.

After the Maji Maji rebellion, a period of famine or the Great Hunger (njaa in Swahili) came about, resulting partly from Gustav Adolf von Götzen’s infamous scorched-earth war strategy.

Bokero’s followers during the Maji Maji rebellion were poorly armed, having just spears and arrows, with some having poison. Nevertheless, numerous thought the magic medicine would protect them from harm by turning the Germans’ bullets into water. The local fighters move from the villages with millet stalks on their foreheads. The revolt started with attacks on tiny German outposts, including destroying cotton plants.

Matumbi tribe members attacked Samanga and ruined cotton crops and a trading post on 31 July 1905. Kinjeketile Ngwale got arrested and charged with treason before he was hanged. Before getting executed, he disclosed the news about the spreading of medicine for the Maji Maji rebellion all over the region. By 14 August 1905, tribes‘ people from Ngindo ambushed a tiny group of missionaries while on a safari; Bishop Spiss or Dar es Salaam’s Roman Catholic Bishop was among the five who got speared to death.

Soon after, Yao tribes joined the Maji Maji rebellion and moved from Matumbi Hills in the south of modern-day Tanzania to attack German garrisons all over the colony in August. On 16 August, an attack on Ifakara destroyed a tiny German fort leading to the key reinforcement at Mahenge. Despite the garrison in the south being relatively small (with just 588 local and 458 European soldiers in the whole area), the Germans had an advantage because of the fortifications with modern weapons.

Thousands of Maji Maji rebellion fighters (commanded by spirit medium apart from Bokero) attacked a German cantonment at Mahenge. Lieutenant Theodor von Hassel put up a strong defense with 60 local soldiers, two machine guns and some loyal tribesmen in hundreds. The attackers from tribes failed to agree on the time of the attack and lacked coordination.

The initial attack met gunfire from 1000 m; despite standing firm for around 15 minutes, the native fighters eventually broke and backed down. Afterwards, the second group of 1,200 men attacked eastward. Some attackers reached within three footsteps of the shooting line before getting killed.

Qadiriyya Brotherhood announced a Jihad on the Germans, joined by Sufi Muslims who were playing a significant part in the Maji Maji rebellion.

Although this marked the rebellion’s apex, the Ngoni joined the Maji Maji rebellion having an army of 5,000 men. Gwangara Ngoni, who were Muslims, had just arrived in the region; these were descendants of the Ndwandwe confederation remnants who the Zulus had defeated by 1818 (more Ngoni states existed in Zambia, north-central TZ and Malawi).

German soldiers with machine guns left Mahenge to attack the Ngoni camp on 21 October. The Ngoni retreated while throwing away the war medicine bottles and lamenting that the Maji was a hoax. When the fighting started, Count Gustav Adolf von Götzen, the governor of German EA, asked for additional support from his government.

Kaiser Wilhelm right away sent two cruisers with marine warfare to the German EA. Reinforcements came from far, including New Guinea. After 1,000 soldiers from Germany in October, Götzen decided to make an offensive to restore order in the south with three battalions moving into the Maji Maji rebellion zone.

The German soldiers destroyed crops, villages, or other sources of food utilized by the insurgents. Firepower was effective in crushing rebel attacks. The Bena successfully ambushed a German column in the southwest while crossing Rufiji River to keep the Maji Maji rebellion alive in the area. However, the Germans didn’t take long to reclaim the territory. In April 1906, the Germans had pacified the southwest. However, after intense fighting.

A battalion commanded by Lt. Gustav von Blumenthal (born in 1879 and buried at Lindi in1913) included 46 locals and another European were regularly attacked while moving to Mahenge from Songea at the beginning of May 1906. The Germans converged at Kitanda, where Lt. von Blumenthal, Lt. von Lindeiner-Wildau, and Major Johannes finally assembled. Von Blumenthal was dispatched along River Luwegu, partly by boat.

The fighting in the southeast became a guerrilla war with a subsequently devastating famine. This famine was deliberate to some extent. Von Götzen agreed to give amnesty to fighters who gave up their leaders, witch doctors, and weapons. However, he decided to use famine to flush out any remaining rebels. Captain Wangenheim, a leader of the German troops in the territory, revealed that final submission would come from want and hunger. That military power would remain less significant.

The last signs of the Maji Maji rebellion disappeared in August 1907. At the height of the revolt, 389 local and 15 German soldiers, including tens or hundreds of thousands of local fighters and innocent people, perished. People lost will of resistance, making the colony calm. This can also be attributed to the new governor, whose reign was more enlightened until World War I broke out.

Consequences and Significance of the Maji Maji rebellion

Historians attribute the outbreak of the Wahehe rebellion from 1891 to 1898 and the Abushiri revolt from 1888 to 1889 to the Maji Maji rebellion. Suppressing the revolution had a significant impact on southern Tanzania’s history. Many people lost their lives or got displaced from their homes. During the war, the German imperial government introduced administrative reforms. When World War I broke out, Tanganyika was among the African nations with better administration from the European colonialists.

The Maji Maji rebellion became a source of inspiration in the region’s history. John Gunther, a journalist, noted in 1953 how Tanganyika’s southern province of Cinderella had not yet recovered fully from German terror after half a century. The region’s economy failed to recover. Tanzanian nationalists used the Maji Maji rebellion to promote nationalism in the country. The uprising became a unifying factor in bringing all Tanzanians under a single leader during the struggle to flee the nation from colonial rule.

Recent historians challenge that school of thought, claiming that the Maji Maji rebellion should never be taken to be a unified movement but various revolts inspired by multiple reasons like religion. Before being executed, Muslim Ngoni chiefs were baptized. Multiple people saw this as a portion of a more extended series of revolts that had existed before the arrival of the Germans. Proof includes the allegiance of some groups with the German colonists to achieve their goals.