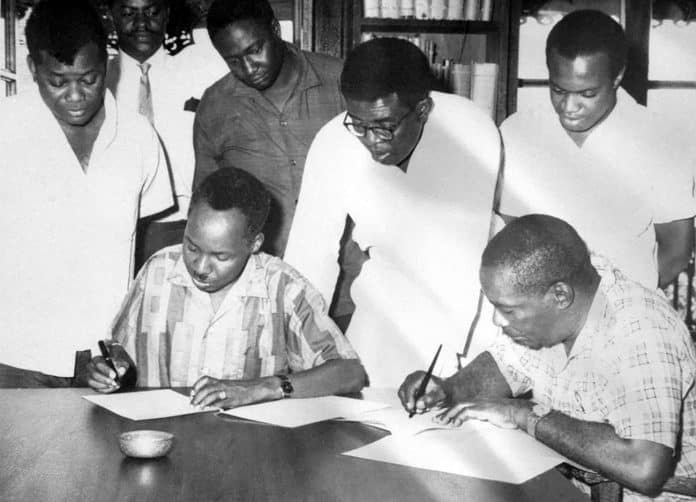 Articles of Union of Tanganyika and Zanzibar – History, Signing, Complaints and More

The Articles of Union of Tanganyika and Zanzibar of 1964 are the basis of the United Republic of Tanzania’s constitution of 1977. On 22 April 1964, the Union’s Founders, Abeid Karume Amani and Julius Nyerere, signed the Articles of Union, which agreed on 11 issues that have since grown to over twenty-two and are the cause of friction and dispute between Zanzibar and mainland Tanzania. The original Articles of Union of Tanganyika and Zanzibar, which include both Nyerere and Karume’s signatures, are yet to be discovered.

Under Mwalimu Nyerere’s leadership, TAA formally became a recognized political party in 1953. In 1954, it was renamed Tanganyika African National Union (TANU) in 1954.

The agreement for the Articles of union of Tanganyika and Zanzibar is thought to have been signed on April 22, 1964, in Zanzibar, by the late Julius Nyerere, the 1st President of Tanganyika, and the late Sheikh Karume Abeid, the 1st President of Zanzibar. Although the Union’s Original Articles do not exist, it was agreed that they had to be ratified by both Zanzibar’s revolutionary council and Tanganyika’s Parliament in order to be valid. Tanganyika’s Parliament ratified the articles of Union of Tanganyika and Zanzibar on April 26, 1964; however, the Zanzibar Revolutionary Council did not ratify the articles as agreed. At Dar es Salaam’s Karimjee Hall on April 27, 1964, the presidents of the two nations exchanged Union legal documents. Section 4 of the Union’s articles declared the foundation of the United Republic.

Since it was formed under Tanzania’s 1st President, Julius Nyerere, in 1964, any discussion or debate about the Articles of Union of Tanganyika and Zanzibar or its legality has been prohibited in Tanzania, and anyone who engages in such debate and discussion, even government officials, could face criminal charges and be labeled the country’s enemy.

Education and knowledge concerning the Articles of Union of Tanganyika and Zanzibar were not provided, and Tanzanians were unaware of the union, the benefits, or the reasons for its formation. The Union’s Original Articles, which contain eleven matters, never existed, and the Zanzibar government repeatedly inquired about these Articles of Union of Tanganyika and Zanzibar only to be given negative responses. Union history or topics were never included in public and private education, including in civic and general studies. The only time unions come up in exams is when students are asked, “What was the year of the union’s formation?” From Nyerere’s era until now, this has resulted in a slew of grievances and critics. Aboud Jumbe, the 2nd President of Zanzibar, was one of the first notable figures to fall victim to the ruse. Aboud and his peers, including Zanzibar’s Chief Minister Sharif Seif Hamad, tried to press for increased autonomy for the island in 1984. Consequently, the union government forced Jumbe to resign as Tanzania’s vice president and Zanzibar’s president in January of 1984. Sharif Seif Hamad, his Chief Minister, was detained and unceremoniously removed from the Revolutionary Council and as Zanzibar’s Chief Minister in January of 1988. In 1988 May, he was expelled by the ruling CCM, along with six other members, and effectively lost his seat in the Zanzibar House of Representatives. He was arrested and hauled to court in May 1989 on (politically driven) fabricated charges of being found with secret documents of the government, thought to be the Articles of Union of Tanganyika and Zanzibar. He served time at the Zanzibar Central Prison from 1989 until 1991.

From 1964 to 1973, six further things-features observed in twelve to sixteen of the first additional were incorporated into the list containing Union Matters, according to the critics. Thus, the issues of currency, banking, and finance were added in 1965, higher education, manufacturing statistics, and licenses, and Annex X components of the East Africa Community Charter were added in 1967. Natural resources of petroleum, natural gas, and oil were added in 1968, and the National Examinations Council issues were expanded in 1973. In 1984, portions of Annex X of the Community Charter of East Africa were added to create four separate lists: weather forecasting, data, and research, aviation, and transportation. Similarly, amendments in the Constitution have added a new item to the Articles of Union Matters list: the Tanzanian Court of Appeal. Moreover, section 3, which dealt with defense, was changed to ‘security and safety.’ In 1992, ‘political party registration’ was also added to the Articles of Union of Tanganyika and Zanzibar Matters list. The question of withdrawing power from the President of Zanzibar in order for him to become Tanzania’s Vice President sparked a heated debate. Furthermore, the Interim Constitution of 1965, which ruled Tanzania until 1977, enacted the constitution’s statute of Annex II, which stated that the Act could not be amended without the support of two-thirds of all Zanzibar and Tanganyika members. The Constitution also states in the 1st Additional that any legal change must be approved by at least two-thirds of all the members “Chapter 557 (1965 Edition), Union Treaty Laws Verification of Zanzibar and Tanganyika in 1964,” however, all Union addition Matters were locally inserted and did not comply with the law.

Zanzibar’s complaints began before the assassination of the island’s first president, Sheikh Amani Karume Snr. Nassor Hassan Moyo, one of Zanzibar Revolution Council 1st Presidents and a Tanzanian minister for several years, claimed that the decision to join Zanzibar and Tanganyika was Nyerere’s idea. One of the first suggestions Nyerere made to Karume was to join the two nations, followed by the Articles of Union of Tanganyika and Zanzibar and finally the constitution of the Union.

One of the earliest disputes between Tanganyika and Zanzibar occurred in the 1970s when Nyerere decided to send Zanzibari soldiers to fight for Mozambique’s liberation without Karume’s knowledge. Karume’s call to return the soldiers caused him and Nyerere to be on bad terms until Karume’s death. Three days later, the Zanzibar revolutionary council held a meeting to determine the Union’s fate and prepared a special request letter containing 5 or 6 matters that were sent to President Nyerere to alter the list of the Articles of Union of Tanganyika and Zanzibar. The list included a requirement for the Tanzanian president to seek advice from the president of Zanzibar in all decisions, including the declaration of a state of emergency, the exclusion of police from union matters, the equality of international relations, and each country has its own currency. Nyerere declined the request and offered to postpone the conversation until a later date.

For more articles related to History of Tanzania, click here!

Tanzania Facts – Explore the Different Aspects of This Great Country