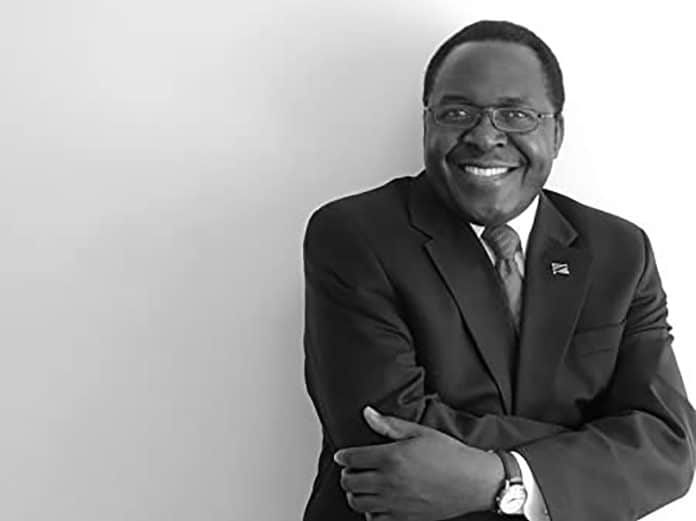 Christopher Mwashinga, Jr. (born on January 9, 1965) is a Tanzanian writer and poet who resides in the United States. He was born in Mbeya, Tanzania. He has written Christian poetry, theology, missionary work, and religious history publications. His poetry has appeared in respectable anthologies in the United States, as well as other nations such as Tanzania, Singapore, and Kenya. In addition to English, he also writes in Kiswahili.

Christopher Mwashinga went to Ngare-Nairobi Elementary School in West Kilimanjaro for elementary school before moving south to Igawilo Sec. School in Mbeya for O-Levels and Songea Boys High School in Songea for A-Levels, both in Tanzania.

Christopher Mwashinga received his theological education at the University of Arusha formerly Tanzania Adventist College in Tanzania and the University of Eastern Africa, Baraton in Kenya, where he acquired a bachelor’s degree in theology.  He subsequently went to the Seventh-day Adventist Theological Seminary at Andrews University in Berrien Springs, Michigan, for graduate study. Mwashinga obtained two master’s degrees at the seminary: a Master of Arts in Religion (Systematic Theology) and a Master of Divinity.  In the same university, he is presently pursuing a Ph.D. in Systematic Theology.

Christopher Mwashinga likes preaching and writing Christian poetry and non-fiction while traveling to other countries.

Christopher Mwashinga, a Seventh-day Adventist preacher, has worked with youth and public university students in East Africa for many years.

He served as a chaplain responsible for Public Campus Ministries in Southern Highlands Conference formally known as the South-West Tanzania Field located in Mbeya before traveling to the United States for additional study. In the Eastern Tanzania Conference of Seventh-day Adventists, he also served as director of numerous church departments, including Public Campus Ministries, Youth, Education, Children’s Ministries, Public Affairs, and Religious Liberty, as well as coordinator of the Satellite Evangelism Program.  During his tenure, Christopher Mwashinga established the Campus Evangelistic Campaigns (CEC) program, which was in charge of planning and implementing evangelistic campaigns at Tanzania’s main public colleges. Between 2000 and 2004, he personally led large evangelistic campaigns at Sokoine University of Agriculture, University of Dar es Salaam[22], and Mzumbe University, using major university auditoriums such as Nkrumah Hall (University of Dar es Salaam), New Assembly Hall (Mzumbe University), and Multi-purpose Hall (Sokoine University of Agriculture), among others  He also addressed university communities at the University of Nairobi, Moi University, and the University of Eastern Africa, Baraton, among others in Kenya.  He was a well-known voice at several of these educational institutions. He also lectured at colleges all around the globe as part of his worldwide tour.

Christopher Mwashinga has spent the last two decades representing the Seventh-day Adventist Church in worldwide conferences and preaching engagements. He crossed the Atlantic 15 times between 2000 and 2017. He traveled to Brazil, Canada, the United States, the Netherlands, the United Kingdom, Germany, Rwanda, Uganda, Thailand, Kenya, Greece, Turkey, Egypt, Tanzania, Israel, the Czech Republic, and Zambia as part of his ministry and study tours. He gave presentations on a variety of topics and wrote hundreds of letters and emails while on those international trips. He also kept a diary and wrote hundreds of poems in both English and Kiswahili.

Christopher Mwashinga started writing and reciting poems at an early age. His first work was featured in Kilimanjaro Leo, which is a weekly Kiswahili local newspaper in his home Tanzania, when he was about 13 years old. He’s produced three compilations of English poetry since then: Beeches of Golden Sand: Inspirational Poems (2009), Windows of Love (2012), and Ocean of Grace (2013). (2016). Voice from the Diaspora (Sauti Toka Ughaibuni), Summit of Hope (Kilele Cha Tumaini), and Tumaini Lenye Baraka: Diwani ya Christopher Mwashinga are three compilations of Kiswahili poetry that he has written (The Blessed Hope). He has also written over fifteen more works, both academic and popular, especially in the areas of theology, ministry, and Christian history. His books on Theology and a Background of Christian Missions that were in East Africa, Changamoto na Fursa za Ukuaji: Uadventist Barani Afrika  (Challenges and Opportunities for Growth: Adventism in Africa), and Christopher Mwashinga’s works in several volumes are among his most notable non-fiction works.

Rays of Hope: Living to Make a Difference was published in 2011.

Enduring the Cross: Messages of Salvation and Hope published in 2012

Theology and the History of Christian Missions in East Africa, published in 2013

Moments of My Christian Experience was published in 2016.

Crossing the United States published in 2019.

The Beginning and Development of Missions: A History of Christianity in East Africa published in 2020

Beaches of Golden Sand: Inspirational Poems was published in 2009.

Ocean of Grace was published in 2016.

Mionzi ya Matumaini, published in 2020

Kazi za Christopher Mwashinga, Maandiko ya Awali, Juzuu ya I, published in 2019