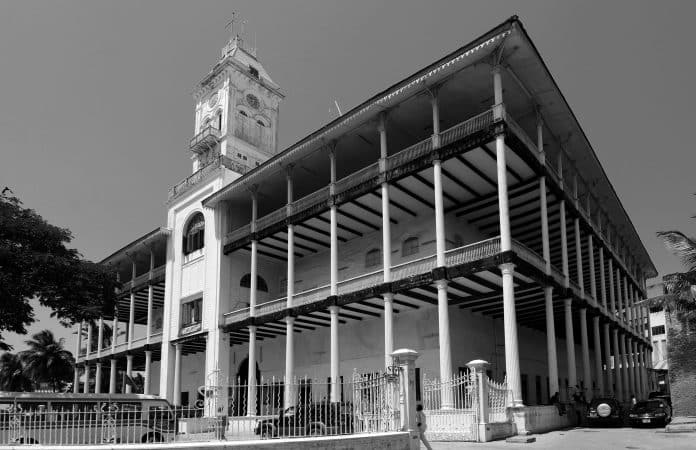 Sneak Peek: The House of Wonders in Stone Town, Zanzibar

The House of Wonders, also called the Palace of Wonders, is a historical structure in Stone Town, Zanzibar. The edifice is the tallest and biggest building in Stone Town and sits in a conspicuous place. It faces the Forodhani Gardens on the seafront of the Old Town on Mizingani Way. It is situated between the Palace Museum (and former Sultan’s Palace)and the Old Fort. The palace is among the six royal residences

that the second, Barghash bin Said of Zanzibar, constructed. It is generally thought to be sited on the ground of the 17th-century palace of Zanzibari queen Fatuma binti Yusuf. The House of Wonders was home to the Museum of History and Culture of Zanzibar and the Swahili Coast.

History of the House of Wonders Zanzibar

The House of Wonders in Zanzibar was constructed for the second Sultan of Zanzibar, Barghash bin Said, in 1883. It was meant to be a ceremonial palace and formal reception auditorium celebrating modernity. It was christened “House of Wonders” because it was the first edifice with electricity in Zanzibar. Apart from this, it was also the first building to have a lift in East Africa. The palace’s design is ascribed to a British marine engineer. The design was the first of its kind in Zanzibar as it brought new features into Zanzibari building design. These features include wide external balconies held up by cast-iron pillars that allowed for distinctively lofty ceilings. The building materials comprised an original blend of coral rags, steel beams, mangrove shoots or boriti, and concrete slabs.

Though the Zanzibar House of Wonders building was a pointer to the Sultan’s modernity, other features made it a useful palace, such as the enclosed passages above street level (wikios), which linked the House of Wonders to the two adjoining palaces Beit al-Sahel (now Palace Museum) and Beit al-Hukum which allowed royal ladies to move around unseen. The palace has an enclosed large central lawn or atrium enclosed by open galleries. Quranic inscriptions are beautifully engraved on some of the palace’s inner doors. Most of the silver adornments and marble floors inside the palace were shipped from Europe.

Apparently, the Sultan had wild animals chained up for exhibition in front of the palace and had the door made spacious so that he could ride an elephant through.

There used to be a lighthouse in front of the palace. The Anglo Zanzibar war of August 27, 1896, led to the destruction of the lighthouse. This short-lived war also consumed the Beit al-Hukum Palace, and the Beit al-Sahel Palace was badly wrecked. The Palace of Wonders did not suffer significant damage. A new clock tower was incorporated into the building’s façade when it was rebuilt in 1897. However, Beit al-Hukum was not reconstructed. Its site was converted into a garden to increase the House of Wonders’ visual dominance.

Only after the onslaught did the King and his harem fully occupy the House of Wonders. It was converted to government offices in 1911 and served as the primary secretariat of the British ruling body. In the aftermath of the Zanzibar Revolution of 1964, the house was transformed into a school and a museum for the governing ASP with the help of North Korea. In 1992-1994, the museum plan was put in motion. Today, the building serves as a museum and is one of the main tourist attractions in Stone Town.

The House of Wonders Museum was opened in the early 2000s. It permanently displays items of the Zanzibari and Swahili way of life as well as the East African environment. A mtepe, a classic Swahili canoe, fully occupies the museum’s inner courtyard. Many rooms have items on different subjects, including ceremonial kangas, Swahili angling equipment, images of a list of Sultans of Zanzibar, and other high-profile people (including a famous image of slave merchant, Tippu Tip). Other items include pieces of furniture from the King’s palaces and information on the East African ecosystem. A room on the ground floor houses an old automobile that was owned by President Abeid Karume. Two aged Portuguese cannons from the 16th century are located at the palace’s entrance. The Persians confiscated them in 1622 before donating them to the Sultans of Oman, who moved them to Zanzibar. The largest of the two cannons bears the insignia of King John III of Portugal. To enter the museum, adults pay Tzs 6.000 while children pay Tzs 4.000. Residents of Zanzibar are allowed free entry as of December 2011

The Shut Down of the House of Wonders Stone Town

Due to disrepair, the House of Wonders has been shut down, with large parts of the balcony and roof giving way in 2012 and 2015, respectively. The House of Wonders Zanzibar collapse threatened the structural solidity of the rest of the building. The museum has been relocated to another site. Though a restoration effort of 6 million is currently ongoing, much of the building’s frontal façade, including the clock tower, has reportedly fallen apart in December 2020. The collapse was a shock and a huge loss to Zanzibaris as the building is a part of the area’s history as well as being a UNESCO heritage site.

On December 25, 2020, a mansion renovation paid for by the Omani government to the tune of 10 billion Tanzanian shillings collapsed. The rescue team rescued four workers trapped inside, while two workers died in the incident. However, a similar structure will be erected through the use of drawings and sketchings.