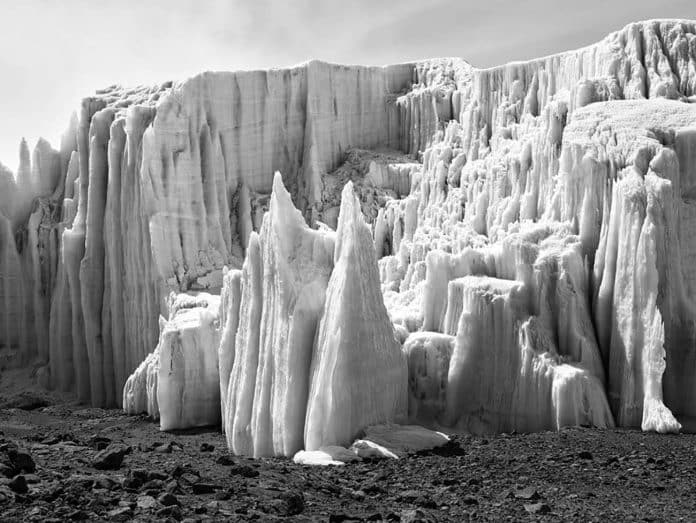 The Glaciers of Kilimanjaro and Their Delicate Charm

As a result of climate change, glaciers are eroding across the globe. Because of increased humidity and warmer air, the Kilimanjaro glaciers melting rate is currently concerning as it is rapid, which is a terrible fact to face. One of Kilimanjaro’s most prominent glaciers, the Furtwangler Glacier, is disappearing at an alarming rate.

Kilimanjaro glaciers 2020 – Back in year 2002 a team of scientific researchers forecasted that the glaciers on Kilimanjaro would completely disappear by year 2020, that did not happen but the effects are obviously being seen in so many other ways so far, there is less snow and ice as days keeps going forward.

The Kilimanjaro glaciers have been estimated to be as old as 11,700-year-old.

According to studies, the glaciers in Kilimanjaro’s Northern Ice Field maybe 11,700 years. Despite this, some areas vulnerable to weather and sunshine and melting and refreezing are thought to be 800 years old.

The Glacier’s Rapid Retreat at Furtwangler:

The ice cover of Kilimanjaro has been reported since the 19th century. Kilimanjaro’s ice cap has melted by more than 80 percent since 1912. Furtwangler Glacier was estimated to have melted by the end of 2011.

Kilimanjaro’s glaciers are disappearing at an accelerated rate because of the dramatic climatic change of the 20th century.

The complete loss of glaciers on Kilimanjaro is predicted to occur between 2030 and 2060.

Ten years ago, photos of glaciers and icefields showed an incredible amount of ice loss.

Kilimanjaro’s Most Famous Tropical Glaciers Include:

Because of the quick melting, this last bit of Kilimanjaro glaciers might be gone by the time you are reading this post. Global warming has resulted in catastrophic and unavoidable outcomes like this one. It is impossible to bring back a glacier that has completely melted away.

According to National Geographic’s predictions, Mount Kilimanjaro’s glaciers will disappear by 2030. Although some scientists are hopeful that the Furtwangler Glacier will cease to exist by 2060, most readers may look forward to both of these dates. The Kilimanjaro Glaciers growing concerns have not stopped year after year from all individuals who love the mountain or study it.

Kilimanjaro’s Furtwangler Glacier, as well as other tropical glaciers, will continue to disintegrate indefinitely. Tanzania and the tallest mountain in Africa are both impacted by global warming to a greater extent.

Glaciers are fast melting based on early 19th-century charting of the ice fields and observations from the top of Kilimanjaro compared to recent data.

Between 1912 and 1953, the National Academy of Sciences found that the ice cover on Kilimanjaro’s summit decreased by about 1%. However, between 1989 and 2007, the rate of decline more than doubled to 2.5 percent. As climate change has worsened in recent decades, this is a concerning trend.

Mount Kilimanjaro’s ice cap shrank by more than 85% between 1912 and 2011. According to NASA’s Earth Observatory page, where specialists may study satellite footage for various sites across the globe, including atop Kilimanjaro, it is no longer a question of whether but when the Kilimanjaro glaciers will disappear.

When it comes to melting ice, “the question isn’t if, but when”

In the words of NASA’s Earth Observation Program.

“All Kilimanjaro ice bodies had drastically receded between 1912 and 2003,” according to another aircraft assessment conducted atop the mountain. We can assume that Kilimanjaro’s ice fields and tropical glaciers have shrunk by over 90% based on the age of this data.

Among tropical Kilimanjaro glaciers, the Furtwangler Glacier is an exception. Their high altitude can explain the presence of snow and ice on tropical mountaintop glaciers. Yet, the low sunlight and relatively consistent tropical weather conditions render tropical glaciers vulnerable to the effects of the weather.

For more than 10,000 years, the glaciers on Mount Kilimanjaro had been protected by icefields and snow. Some glaciers have gone extinct entirely only in the last few decades due to the rapid melting of icefields.

Even while glaciers are referred to as “melting,” the actual mechanism of loss on Kilimanjaro is more likely sublimation, wherein rather than melting, the glaciers’ ice evaporates. There are many ways that Kilimanjaro’s glaciers produce clouds that travel from one place to another. Kilimanjaro’s glaciers will not be saved or slowed down by this, as water will not freeze into snow or ice.

There’s no doubt that climate change is to blame for the rapid disappearance of glaciers on Kilimanjaro over the past few decades.

The Fate of Kilimanjaro

Kilimanjaro’s glaciers and icefields are disappearing at an alarming rate. Because many Tanzanian tour guides’ livelihoods depend on steady tourist traffic, we’re hoping this won’t significantly affect tourism in Tanzania.

On the other hand, most travel agents are confident that this will encourage more tour companies and larger organizations to safeguard Tanzania’s natural beauty. We must encourage more to be done to protect Tanzania’s rhinoceros and elephant populations, even though specific measures have been implemented to ensure the protection of animals in conservation zones.

Booking with socially responsible tour operators minimize their negative impact on Tanzania’s environment is recommended for tourists who want to experience Africa’s natural beauty and see endangered animals in their natural habitats (such as the Serengeti UNESCO sites and Ngorongoro Crater). Kilimanjaro glaciers and Icecaps are critical to the survival of the mountain, and we don’t want them to disappear any time soon.

Most licensed tour operators will ensure that their mountain guides are not only qualified and experienced in safety and environmental preservation but that they share their love for Tanzania’s natural environment. The operators usually have guides who love Tanzania, either because it is where they were born or because they recently discovered their interest. As a result, a tour operator’s mountain hikes are eco-friendly since they usually try put extra effort into how they setup camp, making sure to leave no footprints.

Visit your tour operator animal rescue facility and social awareness projects if you’re interested in learning more (which preserves orphaned elephants and returns them to the wild).

Mountaineers or Hikers and Ice

It is not recommended to do ice climbing on any of Mount Kilimanjaro’s glaciers because of the diminishing tropical glaciers in Africa.

Will Gadd, an excellent ice climber, recently returned to Tanzania to scale Mount Kilimanjaro’s legendary Furtwangler Glacier. In 2020, Gadd attempted to ice climb Kilimanjaro’s largest glacier but found that it had shrunk considerably and the ice walls were dangerously thin. As opposed to climbing, Gadd decided to use his passion for the sport to advocate for action against climate change at the UN.

If you’re looking for an alternative to ice-climbing on Kilimanjaro’s glaciers, it is recommended to go for hiking Mount Kilimanjaro to see the glaciers before they melt away. Climbing teams can capture images of these soon-to-be-extinct natural wonders on an eco-friendly Kilimanjaro excursion.

Some of the Kilimanjaro glaciers can be crossed during your journey. Glacier melting should not be accelerated if you are cautious and do not hack or chip away at the ice.

Kilimanjaro’s glaciers have melted to the point of irreversibility. These 11,700-year ice formations haven’t shrunk despite the effects of global warming.

No one can halt the melting of these tropical glaciers, but we can all learn from it and do our part to protect our planet by implementing environmentally-friendly activities.

Most tour operators want their guests to see the most beautiful national parks, the highest peak in Africa, and Tanzania’s unrivaled natural splendor while on safari with us.’ Before the icefields and glaciers on Kilimanjaro disappear, we encourage all who can climb the mountain. After falling in love with Tanzania, the best way to spread the word about the need to protect the ecosystem is via personal experience.

Weather on Kilimanjaro – Things You Need to Know