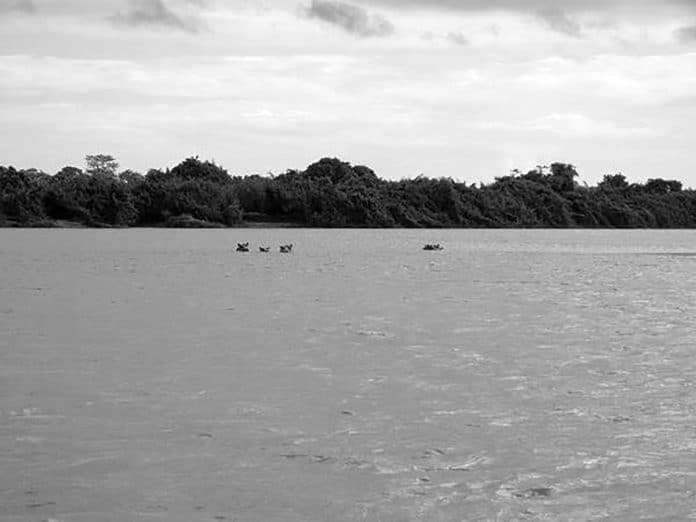 Quick Overview of the Ruvuma River in Tanzania

Ruvuma River, known initially as Rovuma River, is a river in  Africa’s Great Lakes region. The more significant part of its course forms a border between Tanzania and Mozambique (Rio Rovuma in Mozambique ). The river is 800km (497 mi) long, having a drainage basin of 155,500 square km (60,000 sq mi) in size. Its mean discharge is 475 m³/s (16,774 CFS) annually at its mouth.

A junction creates the lower River Ruvuma at 11° 25′ South38° 31′ East. of two branches of approximately equal significance, the longer one is Lujenda coming from the south-west, the other is still known as Ruvuma, from the west. The source sits on an undulating plateau, 1,000 m (3,300 ft) high, immediately east of Lake Nyasa, at 10° 45′ South., 35° 40′ East., the head-stream flows first due west before going east and south.

Eastward, the Ruvuma river flows around the base of the escarpment of a dry sandstone plateau in the north, from the direction the streams, that cut deep channels along the edge of the plateau edge, have nearly all short courses.

One the other bank side Ruvuma river receives, apart from the Lujenda, river Msinje River and river Luchulingo, pouring in broad valleys running to the north from the South. Lujenda rises closer to Lake Chilwa, in the tiny Lake Chiuta (1,700 ft), the swamps in the South separated from Chilwa by just a narrow wooded ridge. A stream that comes from Chiuta goes through a swampy valley to enter the narrow Lake Amaramba, from where Lujenda River finally comes out as a stream 80 yards in width.

Lower down the Ruvuma river there is significant differences in breadth, with various portions of long-wooded islands rising above the flood level and usually occupied. The river Ruvuma is passable in multiple places during the dry season. At the river’s mouth, the width is about a mile wide.

The lower Ruvuma river, often with a width of half a mile but usually shallow, goes through a swampy valley bordered by plateau escarpments having various tiny backwaters of Ruvuma. The mouth is about 10° 28′ South40° 30′ East. A parallel of 10° 40 forms the border around the coast. Ruvuma river is approximately 500 miles (800 km) long.

Unity Bridge across the Ruvuma river between Tanzania and Mozambique was proposed at the beginning of  1975, and despite the start of construction, lack of funds to abandon the project. By 2002,  the two governments signed a formal agreement to construct a new 600-metre bridge on the river, and the eventual inauguration was during a ceremony on 25th May 2010.

The bridge is at Negomano, 200 km inland Tanzania and 100 km away from the closest surface road in Mozambique. The location was agreed upon between President Machel and president Julius Nyerere since it was the site for the first point of entry into Mozambique by Frelimo soldiers during the Mozambican Liberation War on 25th September 1964. This location was also where the German soldiers crossed the river on 25th November 1917.

The initial foundation stones were laid on the side of Mozambique and Tanzania by 10th October 2005. Building ended at the beginning of 2010, and the project cost USD 28 million. Rafts were used to cross the Ruvuma river (on the Tanzanian side) carrying three jeeps. A ferry sank in 2008, and replacement has not been possible. When the water is low, a good 4-wheel drive can cross the river.

Unity Two, a smaller bridge, was also finished in 2007 along the upper River Rovuma near Matchedge, Niassa Province.

For more articles related to Rivers of Tanzania, click here!

Quick Overview of the Wami River in Tanzania

Quick Overview of the Pangani River in Tanzania

Quick Overview of the Mara River in Tanzania