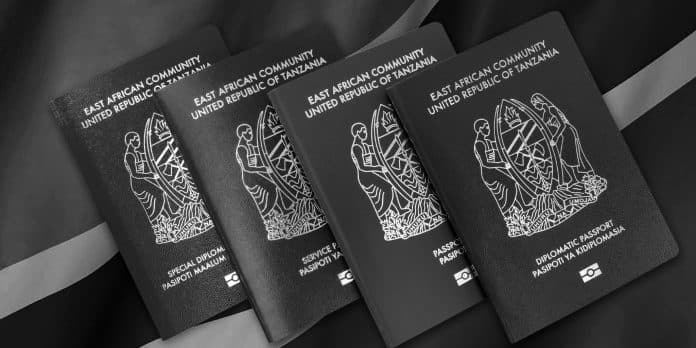 In compliance with the integration plans of the East African Community, the United Republic of Tanzania has commenced the issuance of the latest East African format electronic passports as of January 2018.

The Tanzanian Immigration Department issues the new electronic Tanzanian passport under various colors – navy blue for Ordinary, red for Diplomatic, and green for Service passports. As of January 2018, the new ePassport is accessible to all Tanzanian citizens who need passports for the purpose of international travel. The previous ordinary passport was kept in use until January 2020, when it was officially put out of service and replaced with the new ePassport.

History of the Tanzanian Passport

Prior to the introduction and issuance of ePassports to Tanzanian nationals, the Tanzanian Passport Control Authority issued a machine-readable version of passports. Before then, during the 1970s, there existed another model where the passport holder’s data was either handwritten or typewritten due to the lack of computer technology at the time.

In comparison to the current Tanzanian ePassports, the color green was for the old Ordinary Tanzanian Passport, black for Diplomatic Passport, and blue for the Service Passport. The new Tanzanian ePassport is consistent with the International Civil Aviation Organization’s standards. The passport holder’s photograph, fingerprints, and signature would be acquired and saved digitally in a database upon the first issuing of the passport. However, the holder’s digital photograph would be the only thing coded in the physical passport in a 2D barcode. This, together with the personal identification information and holder’s picture, are laser-printed directly on the passport.

Validity of a Tanzanian Passport

From the date of issuance, a Tanzanian passport is typically valid for 10 years. Holders have to renew it upon expiration in order for them to continue traveling. However, holders who travel frequently can renew theirs a couple of months before expiration to avoid stress and inconvenience.

For Ordinary Tanzanian nationals, the new electronic Tanzanian passports are navy blue in colour, with the country’s coat of arms inscribed in gold in the center of the front cover. The coat of arms reads, “Uhuru na Umoja,” meaning “Freedom and Unity.” At the top is an inscription “East African Community,” which is followed by “The United Republic of Tanzania” inscribed in gold text above the coat of arms. At the bottom is an inscription of the words “Pasipoti” (meaning “Passport” in English) written in gold text too.

The Tanzanian passport’s first page comprises the passport note followed by the page containing the ID information of the passport holder. There are several designs made within the pages of the passport. These include the ‘big five game’ animals found in national parks in Tanzania and former President Julius Nyerere’s unification of Tanganyika and Zanzibar.

The following information is found on the data page:

According to the Henley visa restrictions index, Tanzanian nationals have visa-free access and visas on arrival to 72 territories and countries territories, ranking the Tanzanian passport 77th (level with the Kenyan Passport) with respect to global travel freedom as of November 13, 2021.