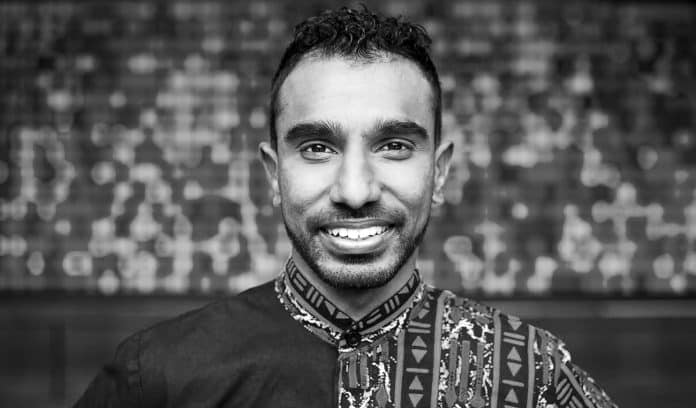 Benjamin Fernandes was born and raised in Dar es Salaam, Tanzania, to Pastor Vernon and Anny Fernandes. Fernandes was a scholarship student at Haven of Peace Academy, where he was known for being among the lowest-performing students academically and did not improve by the time he graduated. Fernandes was offered a conditional scholarship by the University of Northwestern – St. Paul in Roseville, Minnesota, where he was president of a number of student clubs and organizations. Then he went on to Northwestern University, where he graduated first in his class. He returned to Tanzania after Northwestern and volunteered as a community organizer in Dar es Salaam before pursuing his MBA in the United States. Fernandes began his career as a tv presenter when he was 17 years old, working at Agape Television Network, which was being run by his father, Rev. Dr. Fernandes.  He began hosting sports shows before moving on to interviewing politicians and businesspeople.

As a national television presenter in Tanzania during the London 2012 Olympics, Benjamin Fernandes received national attention. In 2014, he received top honors from the University of Northwestern – St. Paul in the United States. He was admitted to Stanford Graduate School of Business in 2014 after earning a $160,000 Stanford Africa MBA Fellowship, which was awarded to just 8 candidates out of 8000 African applications. He and his sister collaborated with their father’s Tanzanian church to co-found Diamond Village, an orphanage. They cleared a field near Bunju, Dar es Salaam, to construct the orphanage, where they taught the children Maths and English.

Fernandes traveled to Palo Alto, California in August 2015 to pursue his career at Stanford Graduate School of Business. He’s a member of the Africa Business Club and is working on a fintech project that will be launched in Tanzania. TRUE Africa named him among the “Top 16 Africans Leading Change in 2016” in January 2016. FastJet airlines highlighted its efforts in Tanzania in its online airline magazine shortly after. As a “Voice of Hope for Tanzania,” he was named. He was chosen to attend the MBA World Summit in Miami, Florida, in March 2016, and he was named the best speaker at the conference. The MBA World Summit Award for 2016 was given to him. Benjamin Fernandes appeared on many live television programs in mid-September 2016, including CNBC Africa, Clouds TV Tanzania,  and TV1 Tanzania.

Fernandes was employed at the Melinda and Bill Gates Foundation situated in Washington, Seatle in 2016, before returning to Stanford Graduate School of Business for his last year of business school.

Fernandes continues to serve as a consultant for the Bill and Melinda Gates Foundation today.

Fernandes received multiple accolades from Stanford Graduate School of Business in 2017. For his contribution to strengthening Tanzania’s financial services industry, Fernandes received the Frances and Arjay Miller Award for Social Innovation. He also received the Miller Social Change Leadership Award, which was nominated by fellow Stanford Graduate School of Business students and instructors.

Benjamin Fernandes graduated after completing his studies at Stanford Graduate School of Business on June 17, 2017, and opted to return to Tanzania. Given his perspective on compensation offers in the United States, this choice astounded many Tanzanians. The post-MBA salary at Stanford Graduate Institution of Business is the highest of any school globally. In 2016, the lowest average starting wage for a graduate student was TSH 418 million ($179,346). His decision to return to home his home country was covered extensively in Tanzanian media, first through a viral interview video conducted by MillardAyo, in which he discussed the potential salary offers he could have received in the United States, which was widely shared across the country, and later on the front page of the Tanzanian national newspaper, Mwananchi.

Benjamin Fernandes has delivered 26 entrepreneurial seminars in four different districts throughout Tanzania in less than 200 days after coming home, with over 22,000 individuals in attendance. Government officials turn up to support Fernandes’ youth projects around the nation, and Fernandes has begun to concentrate on women’s empowerment by enlisting the help of other Tanzanian celebrities.

Since 2015, Fernandes and his sister have sponsored over 200 graduate students from the United States, making him an active contributor to Tanzania’s tourist economy. Every year, he organizes a journey in Tanzania for Stanford and Harvard graduate students, which includes scaling Mount Kilimanjaro, going on safari in the Ngorongoro Crater and the Serengeti, visiting Zanzibar, and lastly introducing his peers to Tanzanian commercial investment prospects. Fernandes utilizes tourism to help the community by constructing solar panels in distant areas of Tanzania and Zanzibar, bringing energy to these areas for the first time.

Benjamin Fernandes is the CEO and Founder of NALA, a Tanzanian digitized financial services portal that allows users to view all of their bank accounts in one app while also making mobile money payments offline (internet-free).

Since then, NALA has grown to include Uganda and Tanzania.