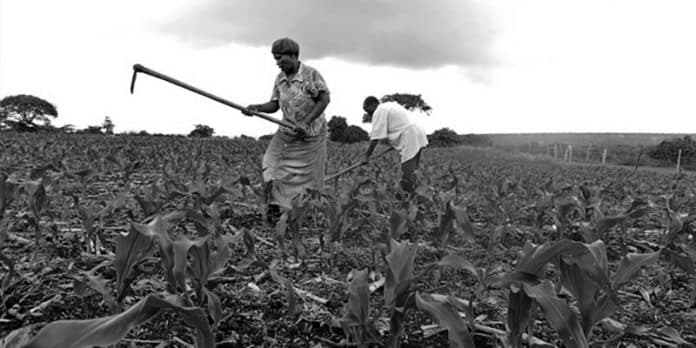 Adoption of Technologies of Maize Production in Tanzania Southern Region

Maize production in Tanzania offers 60 percent of dietary calories including more than 50 percent of useful protein to the people of the country. This food crop is grown on relatively two million hectares, which is about 45 percent of the area under cultivation in Tanzania. Appreciating the benefit of the maize crop to the livelihood of the people of Tanzania, the government has dedicated financial and human resources to improve the sector. A National Maize Research Programme (NMRP) was established in 1974 with the wider objective of coming up with cultivars appropriate for the most significant maize-producing areas. The maize extension services and NMRP have made a great impact in expanding food production.

This report contributes partly to a bigger study to assess the impact of maize extension and research in Tanzania during the last 20 years. The Department of Research and Training (DRT) carried out the study together with the International Maize and Wheat Improvement Center (CIMMYT) and Southern Africa Coordination Centre for Agricultural Research (SACCAR). To prove data reliability and validity, experienced extension officers and researchers used a structured questionnaire while interviewing farmers. Conducting interviews was in all 7 agro-ecological areas of the country from June to November 1995. This report includes research findings in the Southern area, including Lindi, Mtwara, and partly Ruvuma regions.

Heads of households for sampling had a median age of 47 years with a standard of 5 years of schooling. Sample families had about 5 family members having at least two female adults, a male, and two children. Land wasn’t a problem, and the farm had an average size of 6.5 acres. Ownership of domestic animals was not common. The main farm tool was the hand hoe.

Maize is the main cash and food crop in the area under study. Many farmers (77.1 percent) cultivated maize with legumes; however, 22.9 percent cultivated maize as the only crop. Suggested varieties for the Southern area include Staha-St, Ilonga Composite White (ICW), Katumani, Tuxpeño, and Kito. Most farmers cultivated CG4141 (61.8 percent), while about 36 percent of the sample farmers cultivated UCA-St for its high yield and resistance to maize streak virus (MSV).

Preparing land, which was done mostly by hand hoe, relied on the coming of the rains in every zone. Maize was usually planted in rows following recommended spacing. Farmers removed weeds from their maize gardens at least twice. Just 3 percent of the farmers applied inorganic fertilizer. Farmers’ major reasons for not applying fertilizer were that they didn’t need it (52.6 percent) and couldn’t afford it (21.1 percent).

Many farmers picked maize seed in their homesteads (82 percent), with huge cobs with mature and undamaged grain being the selection standard.

No farmer had got credit, and all revealed that credit wasn’t available. Farmers considered bureaucratic hindrances (37 percent) and not having knowledge about credit (14 percent) as the main hindrances to getting loans. Many farmers had got information on better maize practices including planting method, wedding, improved maize seed, storage, and pest management. Limited information had been spread about ox-drawn implements, fertilizer, disease control methods, and herbicides. The most significant sources of knowledge on maize practices included extension, research, and fellow farmers.

Irregular rainfall and deteriorating soil fertility is intensifying the risk of producing maize in Southern Tanzania. Farmers adopted technologies easily that cost little money. For example, all farmers who took part in the survey took up row planting, mostly since it was affordable and had the extra benefit of making weeding easier. Many farmers also embraced the suggested weeding practices. Just some farmers had embraced the more expensive technologies including herbicide, fertilizer, and disease control methods.

Huge areas of Southern Tanzania are at risk of drought with a likelihood of lowering yields or destroying the maize crop and escalate stalk borer attacks. Research should emphasize screening or developing varieties that resist field pests, yield well, and tolerate drought stress. Research to determine strategies for managing storage has to also be carried out.

Many improved varieties respond well to fertilizer responsive with economic yields usually got after application of fertilizer, although fertilizer use is limited by its high cost and not being available. Policymakers have to support the advancement of an effective marketing system for inputs and outputs, which would give farmers higher maize prices and lower prices of fertilizers. Additional research should be focused on soil mining, complementing chemical fertilizers alongside various sources of organic manure, soil conservation, and crop residue management. Extra study regarding soil fertility will be especially relevant since the use of chemical fertilizer is about to stay down in the foreseeable future with its rising price. Additionally, research on the monetary aspect of fertilizer use has been carried out, especially now that output and input markets have been loosened.

Miserable infrastructure and ill-timely delivery of inputs were also significant limitations on the use of enhanced maize technologies in Southern Tanzania. Financing infrastructure, particularly rural access roads, will allow inputs to be delivered to farmers at lower delivery costs and more efficiently leading to lower price of inputs.

Formal credit is unavailable to farmers. With escalating input prices, giving credit to farmers is increasingly important. Together with the government and other partners, the formal loan system should address the credit problems small-scale farmers face, especially not knowing (information) of proper credit systems. Troublesome bureaucratic procedures to get credit need amendment. The establishment of farmer loan groups ought to be encouraged since loaning groups tends to enhance the rate of loan recovery and lower transactions costs.

Maize is among Tanzania’s leading important food crops, it covers 45 percent of the cultivated area. Despite the fact that maize production in Tanzania be makes the country the biggest maize producer in East Africa, it still faces various challenges of obtaining full business capacity. Then, what are the major opportunities and barriers for Tanzania’s maize sector?

Tanzania is among the leading 25 countries producing maize in the world for the past two decades. Maize production in Tanzania exceeds 70 percent of the country’s production of cereal. A sector with great potential for trade expansion and economic development, but hindered by limitations including a lack of financial capacity, high costs, failure to meet quality standards, and prohibitive government policies.

Government trade policies and bureaucratic drawbacks are among the major hindrances to the growth of the maize sector. For example, to maintain food availability in Tanzania, the government prohibits maize export. Besides, export procedures consume a lot of time. “It takes too much time to get an export barcode or export permits for your products”, reveals entrepreneur Abdallah Ramadhani Alute from Kindai Agro. “Additionally some government bodies don’t pursue the business people to ensure their compliance with standards” confirms Ludani Arobogasti Shirima from Chamwino Super Sembe Supply. Such policy limitations present disincentives to Tanzanian processors and limit access to the highly profitable market opportunities, present in neighbouring nations.

An additional barrier undermining the development of the sector is expensive transaction costs. Excessive costs of transportation (miserable infrastructure), corruption, high taxes, and costly export procedures, hike the processor’s expenses of sourcing maize. Additionally, maize processors must incur more costs to pass through roadblocks and obstacles to get municipal council permits, and so on. Consequently, processors must hike the prices of their produce. All these expenses make maize and related products from Tanzania less competitive domestically and internationally.

Tanzania’s maize producers don’t fully reap from present trade opportunities, since their products sometimes fail to meet quality standards. To improve the quality of maize production in Tanzania overall requires the effort of all stakeholders in the maize value chain, beginning with farmers. Supposing farmers don’t supply good quality maize, processors need a lot of effort and money to upgrade the quality at a subsequent stage. Being competitive in the global and regional agro-market, Tanzania has to enhance the quality of maize products through investment in technology, establishing awareness on standards, equipment, and capacity training and building aligning with the value chain.

Tanzania can become East Africa’s granary because of the increasing demand in countries nearby and a transportation advantage of delivering maize to the Horn of Africa and Kenya market. Besides, Tanzania has huge and somewhat underutilized natural resources. However, 76 percent of the cultivatable land, appropriate for farming, is not cultivated. Supposing Tanzania promotes farming on arable land, it has the potential to expand its production of maize and export its surplus.  “Supposing we add value to the maize we grow, it will generate more employment in milling and thus benefit many people”, stresses Oliver Faustine Matemu from Kipipa Miller Ltd.

Address by Nyerere as a Chairman of South Center

The History of Tanganyika Sovereign State