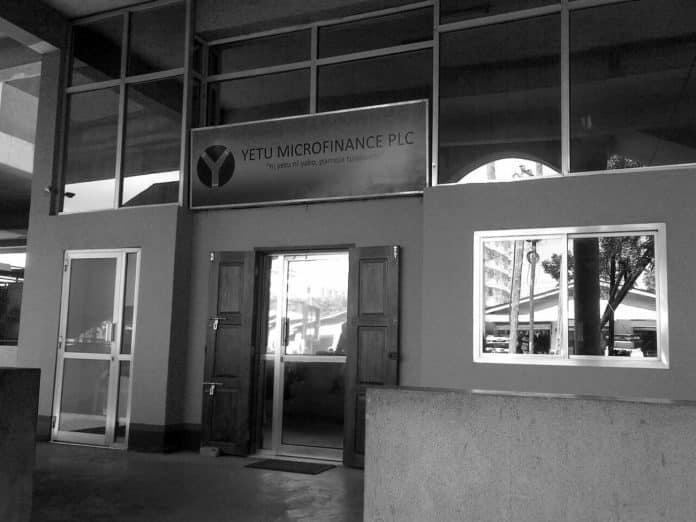 Yetu Microfinance offers credit products like solidarity group loans to consumers organized into groups where the members act as informal banks and guarantee the loans of each other. Mavuno loan products offer solidarity group members who have hit a loan ceiling of Tsh 3 million and are interested in borrowing at an individual level; medium and small enterprise loan products, such as import and export, car, shop/business improvement, manufacturing and processing loans, and business capital; SRI agricultural loans; loans for mixed farming to small-scale farmers to finance a variety of crops; and education loans as well as instant loans. Its deposit options include mandatory (collateral) savings as well as voluntary deposits.

YETU is a public limited company established on 23 December 2013 under the 2002 Companies Act to take over the operations of the Youth Self Employment Foundation (YOSEFO). YOSEFO operated as a credit microfinance institution for fourteen years before becoming a microfinance bank. Yetu Microfinance raised Tsh 3.1 billion in its initial public offering (IPO) on June 23, 2015, under the Enterprise Growth Window (EGM). YETU became the only and first microfinance company to be listed on the Dar es Salaam Stock Exchange on March 10, 2016. After completing licensing standards, including a Tsh 5 billion minimum capital requirement, the business was granted a banking license by the Bank of Tanzania on February 20, 2017. The bank had current paid-up capital of Tsh 6.05 billion as of 2018.

The Yetu Microfinance company’s Board of Directors is made up of six people. One of its 5 non-executive directors is the Chairman. Ernest Ndimbo is the reigning Chairman, while Altemius Millinga is the current CEO and Managing Director.

YOSEFO owns a significant portion of YETU Microfinance Bank. YETU took over all branches, clients, and agencies from YOSEFO. Yetu Microfinance raised 3.1 billion from 14,273 subscribers by selling 6,223,380 shares at 500 each.