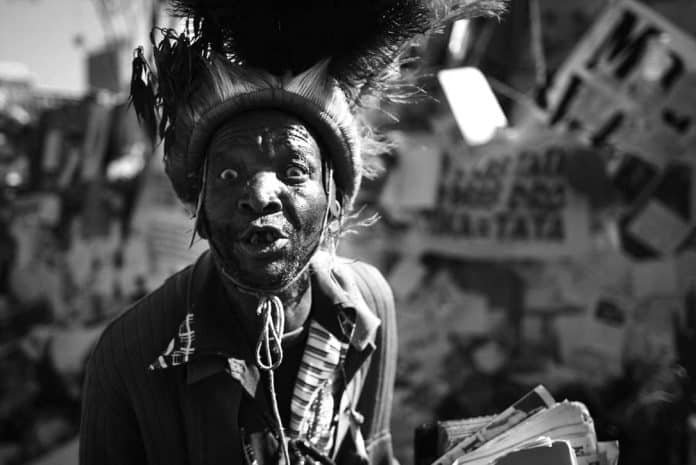 The history of Uganga in Tanzania goes a long way before the contact with the Western people had happened and was part of the system of political and religious beliefs for the early inhabitants of Tanzania. The original Bantu word “Uganga” refers to the profession of those who perform magic and indigenous healing. Uganga had institutions that included religion, witchcraft, magic, health and personal beliefs in the form of cultural and or practice. Before missionaries came and colonial rule establishment from the 1880s traditional healers and political leaders who were allies, had great influence and say over social health matters. The Waganga were people of high status and morals

because they had abilities to alleviate your social, psychological and physiological problems. Many of these waganga got their positions because they were mediators of spirits. If the waganga did not influence political leaders, it was because the leaders themselves were waganga. Witches who practiced spiritism first came to prominence in settling disputes in the community. As a result, their involvement in politics became socially acceptable.

Changes in Uganga Over the Years

In general, the role and status of Uganga have changed dramatically from two centuries ago. To provide a better insight about the importance of waganga today and their role, it is best to go back and look at the history of changes that occurred and all aspects of Uganga in Tanzania.  The details are evenly weighted to be able to recreate the personal histories, the functions and practices of the numerous indigenous healing experts discussed in this article. Research has found that trying to rebuild the old Uganga is challenged with great difficulty; not only because literary articles are scarce but because oral evidence is also not readily available (Tip: explore our other article “The Status of Waganga After Tanganyika Independence” which is an attempt to put together the history of Uganga in Tanzania around independence time). Tribal wars and colonial rule plus some historical events have impacted traditional health practices of today in Tanzania. This will be explained in the next section in detail.

The Exchange of Magic and Indigenous Healing

Given the current situation, people in all parts of the country were engaged in maintaining peace and access to development. They needed guaranteed access to food, good health, and the ability of their children to carry on for the next generation. People knew that such blessings were a long shot in many cases, as there were other challenges, such as drought, famine, and disease outbreaks. Since the bloodshed in the past led to many deaths and many great losses there was a shortage of elders in many societies, which meant that the cultural heritage of culture to the next generations was in jeopardy. The result was that the spiritual relationships between people and their ancestors were getting weaker and weaker, causing some men and women to become uncertain about how to care for their offspring. In southern Bantu tribes the spiritual relationship with the ancestors is very important perspective that is reflected in the dynamics and in social cohesion.

It was understood and known that the Kingoni indigenous healing experts had relations with the spirits of the ancestors. Some of traditional healers were rainmakers, medicine makers, and or epidemiologists. The main source of medicine and traditional healing for the Wangoni came from the medical methods of the Thonga, Shona, Chewa and the Tumbuka who in present day resides in neighboring countries in the southwestern Tanzania. A researcher by the name of Read (1970: 179) provided the following information on the role of indigenous healing leaders in the Ngoni empires of Nyasaland (Malawi) from 1930:

In the ngoni Empire, there wAS A WIDE RANGE OF EXPERTS because of the existence of numerous ethnic groups, each with its own cultural and religious and magical system and each with

different methods of treating the sick, diagnosing the causes of misery, and interpreting bad signs and dreams … In times of national catastrophe, the best fortune tellers were called by the chief… most fortune tellers lived a life of isolation, and had no mark to show their strength, in any political or economic situation, though in the past some of the prophets were warriors and leaders. Socially indigenous healing experts were highly respected when responding to calls, or attending non-professional events.

Opposite to the magician and indigenous healing experts in the Ngoni kingdoms, the Hehe kingdoms had medicines and traditional healers included from the Pogoro, Sangu, Wandamba, Wambunga, Wabena, Wandwewe and Wangindo. Many of these tribes were Bantu speakers who settled in parts of Morogoro South and Central, called the Kilombero Basin and parts of areas surrounding the Ulanga river, which are now located in what is now known as Hinga. The chiefs (vatwa sing, mutwa) had a special relationship with the chiefs who had died. They offered sacrifices at their graves to seek help in matters pertaining to the whole area ruled by the chief. Certainly, the Hehe and Wandwewe were highly regarded for their expertise in calling rain. The expertise of the Mbunga and Wangindo was in identifying witches and sorcerers. Meanwhile, in Ulanga Area there was an ongoing changing of the methods of indigenous healing, uganga and magic that were adopted by the people of the Kilombero Basin. Among the various tribes, the Ndwewe, who spoke to the spirits, were called Wambuyi (collectively mutitiyi), valued for their ability to predict military matters. The Wambuyi settled in the Kilombero Basin of Tanzania. Some clans took over the role of Wambuyi spirits, passing on the legacy to later generations. The spirits of Wambuyi were also responsible for maintaining the customs and rituals of the traditional beliefs. Herbal knowledge was a unit of another group of spirit mediums in Wandwewe.

The Wambunga and Wandwewe were prominent traders in the nineteenth century and in both tribes this role was demonstrated in the celebrations of appeasing the spirits. Like the Wangoni and the Hehe, the Wambunga participated in the East African slave market and invaded the coast of Dar es Salaam. Through this cultural interaction, interactions were made between coastal and mainland peoples through uganga, spirits and ghosts. Some of the Mbungas converted to Islam, the Swahili religion and the coastal Arabs. During the tribal war, the spiritual guidance of Wambuyi was strengthened by the advent of another group of local spirits in the Ulanga tribes, which are called Hami spirits. The Hami were identified as the original spirit of the Ndwewe who had magical knowledge. In fact, the Hami spirits were the main force behind the emergence of indigenous healing and anti-magical works in the indigenous tribes of Ulanga. In addition to the Ndwewe, Kihami led spirit mediums to Wandamba, Wambinga and Wangindo. They did so in conjunction with the cultural (family- and ancestral clans) spirits, while coastal spirits were also able to empower these spirit-speaking people.

Some of the cultural concepts and how religion is practiced, health and magic were shared in all parts of the East where Bantu was spoken, as shown in vocabulary terms. Within the context of history the use of the concept of “Ngoma” also needs to be clarified, a word that originally comes from the South African-speaking Ngoni tribes. The Ngoni indigenous healing experts who used ngoma were called isa ngoma. They used medical idioms in ceremonies, rituals or other traditional functions in general. Other names were ‘medicine’ ‘doctors’ ‘ancestral spirits’ and ‘ceremonial offerings’‘. Anything that could aid indigenous healing or Uganga would be called medicine. In general, Uganga would use the same tools of trade (ingredients as medicine), and artistic disciplines, (acts like ngoma and rituals) were involved in healing. Medical treatments involved with indigenous healing would include the use of things such as branches, bark, roots and sap of trees

and shrubs, as well as ‘field herbal medicine’ (mitishimba). Waganga had a knowledge of large span of herbs that to this day are still used for medicinal purposes and for rituals with same names. For some illnesses, treatments have remained the same for centuries. The Bantu concept of medicine “Kuganga”, used and still is used in conjunction with the verb to heal or to mean to be comforted, to recover or to be healed, ‘but also’ to be safe, to be saved, to regain strength and to be healed ‘. In an attempt to discover the deeper meaning of the word “Ngoma”, researchers linked indigenous healing “kuponya” with ngoma therapy, because it is used as an alternative link to the experience of the spiritual power people possess of medicine. Another Bantu word related to the indigenous healing Uganga is ‘kutibu’ which means ‘medical treatment’. For spiritual healers in modern times, material and art are still very much in vogue.

When the Bantu people spoke of spirits, they first referred to ancestral spirits or spirits from the root word -dimu meaning ‘shadow’. Spirits to this day are distinguished by family, clan, in part, ancestral or foreign ancestral spirits. Ancestors can comeback as snakes, mahoka or masoka that often live in caves. Related to spirits are the spirits of reconciliation through sacrificial ceremonies. Rituals include prayers and gifts for ancestors. Offerings are traditional alcohol beverages as well as flour, water spitting and animal sacrifices, which are performed by an older family member in the family. Reconciliation was / was done in a special places, such as in trees and other places with themes and indigenous habitat. These are the places that were once preferred as sacred cultural sites, but today they are few remaining. Prayers at funerals were used to appease the spirits of the dead to reduce the likelihood that their spirits would harm someone out of anger. With the coming of the Arabs and Europeans some of the spirits entered the strongholds of the traditional religions.

Whenever the Bantu symbolized evil deeds from a person through magic or sorcery, they would refer to witchcraft, historically, magic and sorcery were controlled by a witch or by magicians, who used inspiration from their own spirits to ensnare wrongdoers. The name Mwavi is still found in most of the Bantu population today in Africa. Some of the Mwavi were made of fire or hot water to identify thieves, murderers, adulterers; but not witches. Mwavi was also used to control witchcraft, but there was no conclusive evidence. I know from oral transfer of knowledge that the issue of poison in Tanzania was used until it was banned by the German and later English rulers. To this day, magical acts mean to guide the spirits and powers of nature with evil intentions. The verbs “Kulogwa” or “Kulowa” means mainly magical deeds. “Uchawi” or “Ulozi” is a term that signifies an evil power within a person. These powers can be inherited so they are hidden from birth, or, these powers can be passed on to another person by a parent or another witch. Magic can be “Ulozi” (black magic). Basically, magic can be taught to anyone. Because witches are the ones who practice witchcraft, the concept of magic is widely used when we describe these practices. Those practitioners who practice white magic can be distinguished by the name of being (wanawanga) white magicians. The word “wanga” comes from light, logically that these are people who are led by spirits to practice magic without harming other people.