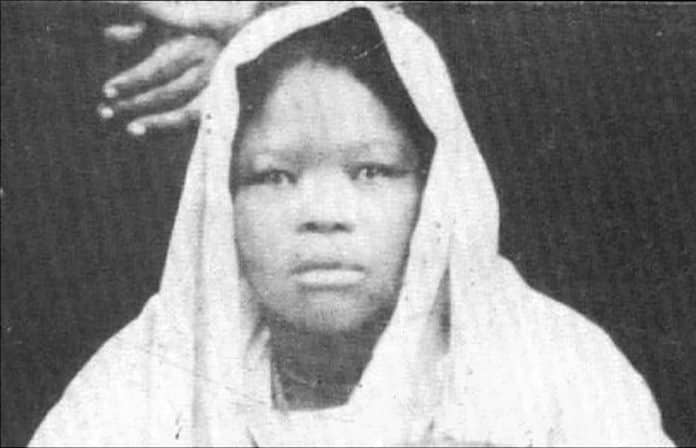 Born 1880 and died in 1950, Siti Binti Saad was a pioneer in the east African taarab music genre. She was a female vocalist pioneer in the genre at an age when male musicians dominated: she was the 1st East African female to record songs on an album. She sang in Swahili, in contrast to prior artists who sang in Arabic. She performed in towns along the Tanganyika and Zanzibar coasts.

Siti Binti Saad career was at its pinnacle from 1928 until 1950, when she recorded over 150 phonograph recordings in India. Following her death, more female singers began to emerge at formerly all-male singing clubs.

In 1880, Siti Binti Saad was born in the Zanzibar town of Fumba. Because she was born during the Arab enslavement era, she was given the name ‘Mtumwa’ (slave).

Her father was Saadi, a member of the Nyamwezi tribe from Tabora, and her mother was a member of the Zigua tribe from Tanga; both were born in Zanzibar to extremely impoverished households and were involved in agricultural and pottery-making occupations, which Siti Binti Saad learnt and mastered well.

“Being born poor isn’t dying poor,” as the Swahili say.

Siti Binti Saad was born with a unique talent for singing. She used to sing to sell her mother’s pottery when she was younger: her singing voice could be heard for kilometers, signaling that Mtumwa’s pottery was on sale that day. Siti’s lungs were reputed to be as strong as those of a lion.

Siti Binti Saad was unable to attend school or attend Quranic studies since education for female children was not regarded seriously at the time. As a result, she made the decision to go to the metropolis in order to improve her situation. Ali Muhsin, a member of the taarab group Nadi Ikhwani Safa, was one among the people she met. Nadi Ikhwani Safa was the sole taarab group at the time, created by Zanzibar’s Sultan Barghash bin Said, who enjoyed comfort and elegance. It was an all-male band since it was considered impolite for women to join musical ensembles at the time.

Lord Muhsin offered to teach Siti Binti Saad to sing with musical instruments and Arabic accompaniment. He then introduced her to the other members of Nadi Ikhwani Safa, who immediately started organizing numerous community performances for her. They were invited to play at several weddings and other festivals, particularly by the Sultan and other wealthy Arabs.

Siti Binti Saad prominence rose as time passed. Her popularity was recognized by Columbia Records and His Master’s Voice in 1928, and they asked her and the ensemble to record in Swahili at their recording studio in Mumbai. The corporation couldn’t believe how well the music was selling, given that the typical player only sold 900 records in the first two years, but soared to 72,000 in 1931. Siti’s reputation grew as a result of the album’s widespread distribution, bringing visitors from all over the globe to Zanzibar. When Columbia Records decided to create a music recording facility in Zanzibar, things became even better for Siti.

Siti Binti Saad continued to perform music until she was well into her senior years. She met the great writer and poet Shaban Robert shortly before her death, who interviewed her for a biography he wrote, Waasifu wa Siti Binti Saad. This biography is considered one of Tanzania’s best works of literature and is taught in Tanzanian secondary schools.

Siti Binti Saad died on July 8, 1950, leaving a major void in the realm of taarab. Despite the fact that her absence cannot be replaced, many individuals continue to sing in her manner. Bi Kidude was the preeminent exponent till her death in 2013.

Siti Binti Saad, a member of the downtrodden classes, used taarab music to advocate for social justice in Tanzania. Her song “The Police Have Stopped” strongly attacked a judge who allowed a wealthy wife-murderer go free. She fought against class discrimination and men’s mistreatment of women. She appeared not to fear the sultan.

Her name is still used as an example for courage even after she died. The Voice of the Siti is the name of the party publication of the Tanzanian Association of Women Journalists (TAMWA). Siti Binti Saad is still used as a metric for teaching taarab today.