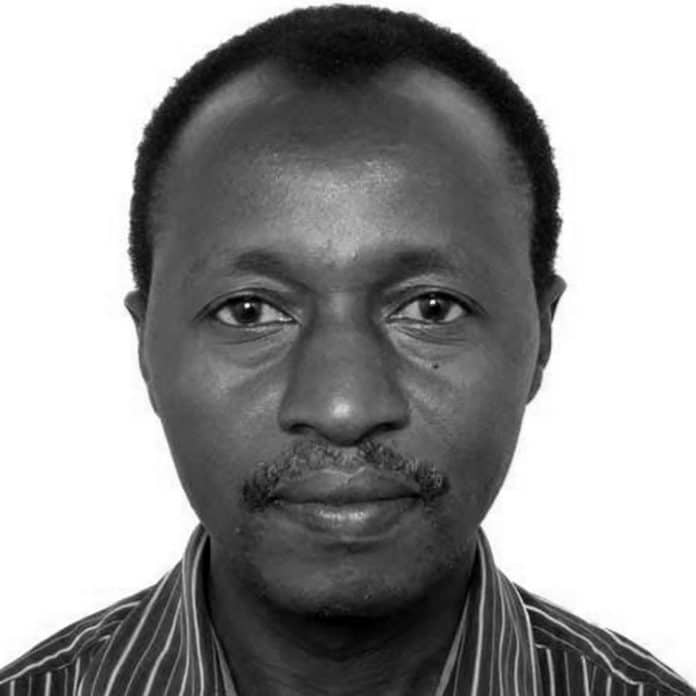 Imani Sanga is a music professor at the University of Dar es Salaam’s Humanities’ College’ Department of Creative Arts, previously known as the Department of Performing and Fine Arts. He teaches Choral Music, Composition, Music, Philosophy and Ethnomusicology. He also leads the university choir.

Imani Sanga (born 1972) attended Chimala Primary School, later the Kidugala Seminary for Lutherans, and then the Dar es Salaam University and finally got his Phd at the KwaZulu-Natal University. He graduated from the Dar es Salaam University with a BA in 1999 and an MA in 2001. In 2006, he received his PhD from the University of KwaZulu-Natal. Under the direction of Professor Beverly Parker, he completed his PhD research, Muziki wa Injili: About Temporal and Spatial Aesthetics of Common, Religious Music found in Dar es Salaam, Tanzania (1980–2005).

Imani Sanga worked on the manuscript for a book based on his Doctoral thesis as a research student at the Mount Holyoke College and University of Massachusetts Amherst under the Five College African Scholars Program from August to December 2007.   He received a scholarship from the American Council of Learned Societies’ (ACLS) African Humanities Program (AHP) in 2009 to work on his book on soundscapes after colonialism.   In addition, he is a Kent R. Mulikin fellow at the National Humanities Center (2019-2020).

Imani Sanga research and publications concentrate on Tanzanian church and popular music, as well as the use of music in Tanzanian Swahili literature, in connection to the development of gendered, religious, and national identities in the context of globalization. His work is informed by African philosophy, music aesthetics, postcolonial theory, continental philosophy, and cultural theory, among other theoretical views.

This book is about Muziki wa Injili (gospel music), one of Tanzania’s more recent music styles. It looks at how performances of this music, as well as the behaviors that surround its development and usage, are linked to diverse ideas of time and place. Imani Sanga examines various changes in Muziki wa Injili from the 1980s to 2005 through anthropological accounts and musical assessments, and he discusses the role this style of music has played in determining people‘s experiences of events, identities, and social relations (with a focus on gendered, national, and religious relations and identities) in Dar es Salaam.

This is a songbook compilation of Sanga’s previous compositions and arrangements for church choirs of indigenous Tanzanian songs from diverse music traditions.

“Kumpolo: Aesthetic enjoyment of bird noises and cultural appropriation in Tanzania.” 97—102 in Folklore, vol. 117, no. 1.

“Mzungu Kichaa and the Formation of Identity in Tanzanian Bongo Flava Music.” 189–208 in International Review of Aesthetics and Sociology of Music, vol. 42, no. 1.

“Mbunga’s Church Law and Bantu Music: The Limits and Ambivalences of Postcolonial Consciousness.” 125–141 in Yearbook for Traditional Music 45.

“In selected paintings by Elias Jengo, postcolonial archival fever and the musical archiving of African identity.” 140–154 in Journal of African Cultural Studies, Vol. 26, No. 2.

“Edwin Semzaba’s Novel “Marimba ya Majaliwa”: Marimba and the Musical Discovery of Desire and the Postcolonialism National Identity.” 401-421 in IRASM: International Review of Aesthetics and Sociology of Music.

“Reading Agawu, P’Bitek, and Abiodun: Antinomies of African Aesthetics and the Impulses of Aesthetic Relativism.” African Identities, vol. 15, no. 3, pp. 310–323.

“Kulikoyela K. Kahigi’s Poems: Musical Figures and the Figuring of Tanzanian Social Life.” 214—225 in Journal of Postcolonial Writing, vol. 54, no. 2.

As a guitarist and keyboardist for The Patmos group (a university-based gospel music ensemble),

As conductor/mwalimu and organist for CCT’s Kwaya Kuu (Main Choir) at the University of Dar es Salaam.

As conductor/mwalimu and pianist for CCT’s Kwaya ya Watoto (Children‘s Choir) at the University of Dar es Salaam.

As director of the Kidugala Lutheran Seminary Choir in Iringa, Njombe

He was a tenor vocalist in the Durban Chamber Choir in South Africa from 2004 to 2005 while attending KwaZulu-Natal University.

Imani Sanga sang with the Hampshire Choral Society in Massachusetts, United States of America, from August to December 2007.