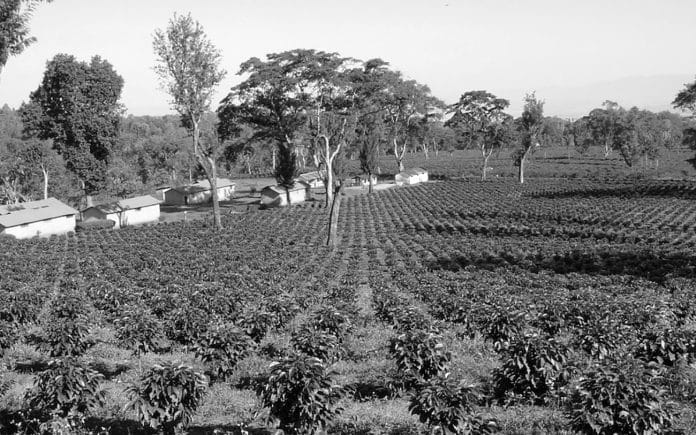 Tanzania’s major export crop is coffee, which is a substantial part of the country’s economy. Coffee production in Tanzania amounts an average of 30 to 40,000 metric tons per year, with Arabica accounting for 70 percent and Robusta for 30 percent.

The Bukoba portion of the Kagera Zone is the major growing region for Robusta. Coffea kihansiensis and Coffea bridsoniae, 2 new species, were recently discovered in Tanzania’s Eastern Arc Mountains. Traditionally, the harvest season runs from October until February. Smallholder coffee farms account for 90% of all coffee farms in the country, with plantations accounting for the remaining 5%. According to industry estimates, the coffee production in Tanzania industry employs roughly 270,000 people.

Prior to 1990, cooperative unions and State Coffee Board were in charge of coffee marketing. Export pricing was changed by reforms in 1990 and in 1994–1995. In 1997, the coffee wilt illness first occurred in Tanzania, quickly spreading and inflicting significant losses.

Background of Coffee Production in Tanzania

During the sixteenth century, coffee was brought to Tanzania from present-day Ethiopia. Coffee was not brewed, but it was utilized as a stimulant throughout the region. According to oral sources in the area, the Haya community, who inhabit northwestern Tanzania in the present-day Kagera area, was the only group known to use the beans. The Robusta beans were cooked and steamed with other herbs, which the tribe chewed as a stimulant. They also utilized the beans as a sort of payment, and tribal officials had tight control over the growth and cultivation of the beans.

The German rule in the late-nineteenth century altered Coffee production in Tanzania. German colonists ordered the planting of Arabica coffee plants throughout the Bukoba region in 1911. The Germans enacted a number of rules that limited tribal chiefs’ power over coffee growing and made coffee seeds freely available. The Haya community was obliged to plant a variety of food crops, including bananas and pineapples, as well as the new Arabica variety that the Germans introduced. The bean was also introduced by the Germans in the northern part of the nation, near Tanga and Kilimanjaro. Following the abolition of slavery, tribal leaders who depended on the slave trade for money, like the Chagga, completely turned to coffee cultivation.

When Britain took control of Tanganyika after WW I, they increased the push of Coffee production in Tanzania and enacted a number of land reform measures. The Haya people continued to fight the British, and coffee output in the northwest area stagnated. The Chagga, despite having no previous experience with the crop, continued to cultivate it and exported 6000 tonnes valued at USD 1.2 million in 1925. The British increased their territory of coffee producers as the railway was extended throughout the nation. The Kilimanjaro Native Planters’ Association (KNPA) was established in 1925 and was the pioneer of several coffee cooperatives established around the nation to assist farmers in obtaining better prices.

Coffee Production in Tanzania During the Post-Independence Era

Post-independence, Tanzania’s socialist government considered the crop to have a lot of potentials and aimed to double its production. To boost output, coffee farmers were granted various loans and schemes. In addition, extensive estates owned by the government were established in the country’s south, specifically in the Mbinga and Mbozi areas. Farmer’s cooperatives were expanded by the government into regions where there was no prior cooperative necessity or experience. The majority of these cooperatives did not succeed, and output was impeded by the huge migration of the populace caused by Ujamaa at the beginning of the 1970s. All coffee transactions were handled by 2 cooperative-owned processing factories until 1976, one located in Moshi (Coffea arabica) and another in Bukoba (Coffea robusta), and then sold at the Moshi auction. All cooperative unions were abolished in 1977, and the government established the Tanzanian Coffee Authority. Due to substantial government involvement and high production costs, the country’s coffee industry has suffered greatly.

The early 1990s reforms privatizing Coffee production in Tanzania greatly improved the system’s efficiency. The Coffee Board of Tanzania was re-established to issue licenses and permits, and coffee production and sales became completely independent. They are also in charge of sorting beans and overseeing the Moshi Coffee Auction.

Due to its colonial background, Tanzania chose British terminology for coffee grading, which is conducted with respect to the bean’s size, density, and shape.

The following are the eleven grades:

Farmers sell their crops in three different ways. The internal market is where the coffee is sold to private coffee customers, coffee cooperatives, or village groups at a price determined by the grower. Because of poor yields per grower, this is the most popular approach among small farms. Private coffee purchasers and cooperatives can either sell the produce at the Coffee Auction at Moshi or directly export the commodity once they have received a large volume of it. Most high-quality coffee producers are able to sell their beans directly to international roasters without having to go through an auction. Tanzania’s Coffee Board devised this program to help Coffee production in Tanzania and local businesses establish long-term relationships with their foreign buyers.

This Coffee Exchange is located in Moshi in the Kilimanjaro area and hosts an auction weekly for nine months. Weekly auctions are held every Thursday, and all domestic exporters without a license to circumvent the exchange must export via the auction. Licensed exporters attend the auction, and no limitations exist on how much each exporter may acquire. The table below shows a sample of typical coffee prices (per bag of 50 kg) during the auction on January 15, 2015.

Agriculture makes up a large portion of Tanzania’s economy, accounting for 24 percent of the country’s GDP. Tanzania’s coffee exports accounted for 3.3 percent of total exports in 2014, totaling $186 million. Over 90% of the country’s production is produced by small-scale farmers rather than large estates, employing over 400,000 people and directly affecting over 2.4 million people. After tobacco, coffee is the second most valuable agricultural export. Japan (22 percent), the US (12%), and Italy (19 percent) are the top three coffee buyers in Tanzania. Previously, Germany was the major buyer of coffee from Tanzania, but as marketing and quality control improved, the US and Japan have started to purchase more. Germany used to be the leading buyer of Tanzanian coffee, but marketing and quality control have taken over the majority of exports.

Over time, the coffee board of Tanzania has faced several problems and continues to strive for a better brand identity for Coffee Production in Tanzania. Because the majority of Tanzania’s exports are used to blending in together with the other brands, they lose value in the worldwide market. However, it has successfully maintained a brand in Japan known as “Kilimanjaro coffee.” The All Japan Fair Trade Council declared in 1991 that all coffee from Tanzania, regardless of where it was grown, may be labeled “Kilimanjaro coffee.” Additionally, any coffee mix containing at least 30% Tanzanian beans is eligible to use the designation. This significant advancement in the market in Japan resulted in a rise in the value of Tanzanian coffee, and Japan is now the largest importer.

Coffee consumption locally is less than the amount exported. Because of the country’s high levels of poverty, coffee costs more than tea, which the people drink more. However, domestic coffee consumption has increased in recent years, going from 2 percent of output in 2003 up to percent in 2014.

This Institute was established in 2000 as a government-owned non-profit organization and started operations in 2001 September. Other coffee community members own a stake in the institute, which is principally owned by the government. The organization is non-profit and relies only on government financing, donations, and the sale of farming supplies and equipment. Due to the diminishing Coffee production in Tanzania output from the 1990s, the institution has been entrusted with revitalizing the country’s coffee industry and assisting in the rise of revenue from exporting coffee. The institution delivers relevant technology improvements to the sector’s thousands of farmers, as well as teaching them on improved farming techniques in line with continuous professional growth and best practices of the present coffee-growing industry.