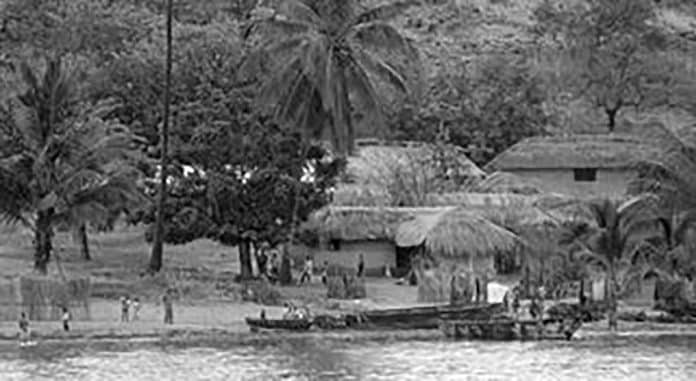 Kalema (also known as Karema) is a Tanzanian settlement on the eastern bank of the Tanganyika Lake that was once home to a mission post of the White Fathers.

The lake (Tanganyika) is located in the Congo Basin’s east. Tippu Tip, an ivory and slave trader who established an empire in the 1870s spanning the upper section of the River Congo to the lake’s western side, sent his products for sale to Zanzibar. Karema was located among the major trade routes between the Congo and Africa’s east coast.

In 1876 September, at the International Geographical Conference in Brussels, the International African Association was founded, with its first president being Belgium’s King Leopold II. On November 25, 1878, the Comité D’Études du Haut Congo was established to open up the vast Congo Basin for exploitation by the Europeans. The Comité was a forerunner of King Leopold II’s Congo Free State, his private enterprise.

The Comité D’Études du Haut Congo conquered Karema in 1879 and changed its name to Fort Leopold in honour of Belgian King Leopold II. In 1882, Lieutenant Becker Jérôme handed over authority to Captain Emile Storms after his term of duty had expired. The chief of Karema village, Yassagula, attacked the base soon after the arrival of Storms. Becker used his askaris to counterattack, driving Yassagula’s troops away and destroying the village. Yassagula submitted some months later and was a solid ally from then on. On the 17th of November, Becker boarded a train to return home. Storms bolstered and extended the post, now known as Fort Léopold, the station also began to cultivate vegetables. On the 23rd of April 1883, he counterattacked a hit on his couriers, defeating the rebelling chief in the expedition. During the battle, however, Richard Böhm, a German scientist who accompanied Emille Storms, was hit in his leg by two gunshots and had to be hospitalized for many months. Storms then laid the foundations for Mpala located on the lake’s west coast, opposite Karema, on May 4, 1883.

The lake’s eastern side, including Karema, was designated as the German’s region of influence at the Berlin Conference, which took place from 1884 to 1885. Belgium’s King Leopold II opted to concentrate his colonization efforts in the lower part of Congo. He requested Charles Lavigerie, an archbishop and the creator of White Fathers missionary group if he liked the missionaries to take the place of Belgian agents in the two Lake Tanganyika stations. Lavigerie agreed.

With 500 rescued slaves, the missionaries created the Karema village. They needed to be protected. In a letter dated February 20, 1886, Léopold Louis Joubert, formerly a Papal Zouave, volunteered his expertise to Charles Lavigerie and was accepted. On June 14, 1886, Joubert arrived in Zanzibar, and on November 22, 1886, he arrived at the Karema mission. He stayed for a few months upon being requested by Mgr. Jean-Baptiste-Frézal Charbonnier, the Vicar Apostolic of Tanganyika, to safeguard the mission from slaver raids. In March 1887, he crossed Lake Tanganyika to Mpala.

On March 16, 1888, Bridoux Léonce was requested to succeed Charbonnier following his death in Karema. Bridoux later died on October 20, 1890. Adrien Atiman reached Karema in 1889 and was the medical doctor for the mission, a position he held until 1956. In 1890, the missionaries erected a church and, then in 1893, the fortified mission home, both of which are still standing. Adolphe Lechaptois succeeded Bridoux as Titular Bishop of Utica and Vicar Apostolic of Tanganyika on June 19, 1891. He established a base in Karema, where he arrived on September 8, 1891. During the early half of the twentieth century, Lechaptois established a number of schools and five orphanages. Karema’s centre was turned into a junior seminary. Lechaptois died at Karema on November 30, 1917.

Karema is now mostly a fishing community. It can be accessed via ferry. The ferry used since 2010 was MV Liemba, previously the Graf von Götzen, a steamer weighing 1300 tonnes, assembled in 1913 by the Germans at the lake to serve as the armed transport for troops. A guesthouse is provided by the Catholic mission. Land Rover travel is available from Karema to Mpanda, which is the district center.