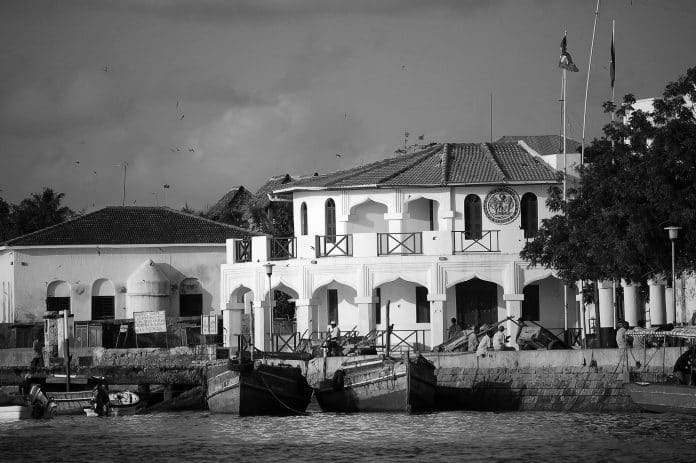 Swahili architecture refers to a range of various building traditions done or used to be done on Africa’s southeastern and eastern coasts. Instead of being simple spinoffs of architecture from the Arab world, the stone architecture of the Swahili people is purely a local initiative resulting from changing religious and social traditions, urban development, and environmental changes.

What we see today as generally Swahili architecture still thrives in town centers like Lamu, Malindi, and Mombasa in Kenya and Kilwa Kisiwani, Zanzibar Songo Mnara in Tanzania. The concentration of Swahili architecture including towns offers essential clues regarding trade connections between various societal systems and regions.

History links and intertwines, leading to heavily layered structures whose breaking down into individual stylistic portions is impossible. Various spectacular remains of the purported golden era of Swahili architecture might still be visible as Gedi ruins (Gedi/Gede lost city) around Kenya’s southern port of Malindi.

You can find various Swahili architecture characteristics such as stone monuments constructed by the Swahili on the East African coast, such as tombs, mosques, and houses. Local materials such as coral limestone were used in the construction of the signature structures as embodiments of Swahili architecture including offering a functional answer to the needs of the people and physical environment.

Some other raw materials commonly used in the construction of stone buildings include mangrove poles and coral rags. The building facade has decorative designs on the building façade that are inspired by a combination of the Arabian Peninsula, South Asian, and mainland African cultures. Different window and roof designs were for protecting buildings against severe monsoon seasons.

Carved doorways are the most significant local element of Swahili architecture. The doorframe motifs and designs are grouped into two classes. Rectangular frames portray the ancient Swahili design with straight lintels. Arched lintels prevailed in the fall of the nineteenth century.

The middle of the lintel usually had carvings of Arabic inscription, including Quranic quotes or house owner details. Therefore, doors often served as an essential sign to heighten and show the householder’s social status.

At the town level, Swahili cities are organized in sections known as mitaa, separated by city walls. According to Swahili, mitaa are symbolic and fictional districts for local dwellers to relate their social status. Every mitaa is located near a mosque. Each mitaa’s social status is reflected through the nature of activities and buildings discovered during archeological excavations.

The interior of a regular Swahili home is designed to surround a self-contained middle courtyard. Privacy in the family is valued, with the separation of the owners’ living area from the communal space. A porch in the interior is oriented towards an empty wall blocking the view of the interior courtyard. Quadrangles also diligently cool the interior of the building.

The oldest existing city along Kenya’s eastern coast, Lamu is among the best well-maintained archeological areas with Swahili architecture. Apart from being among UNESCO’s World Heritage Sites, it’s Lamu County’s headquarters. Initially EA’s trading center, Lamu has diverse ethnicities, with Muslims making up the majority population. The prominent past Swahili town states of the Lamu archipelago include Lamu, Patte, Sheila, Siyu, and Manda.

Swahili Coast Architecture in the Town of Lamu

The city of Lamu and its homes are oriented northwards, to face the Kaaba in Mecca. The orientation is based on religion, as the founders including the majority of dwellers in Lamu believed in Islam. Lamu Town has mitaas including Gardeni, Mkomani, Bombay, Langoni, and Kashmiri

Mkomani is Lamu’s present-day Stone town. The ancient structures built with stones still stand today. The dwellers of Mkomani take themselves to be the elite, the ruling class, and the founders of Lamu. These relate themselves more to being Arabs than Africans.

Langoni is found in the south of Lamu and a place of abode for “strangers” or “newcomers”. The homes are mainly built with thatch and mud. These homes were rebuilt using corrugated iron sheets and coral stone blocks following a big fire in 1982.

Bombay and Kashmiri are newer and developing cities in Lamu’s south.

Gardeni is towards the western part of the dune where Lamu sits.

Swahili architecture in Lamu’s mosques in resemble a lot like houses, they lack distinguishable features including domes or minarets. The architectural make-up of a Lamu mosque includes the Mihrab, the Mimbar, and the Musalla. Among the most prominent Lamu mosques is Riyadha Mosque, constructed by Habib Salih in 1990. It hosts Lamu’s biggest Mawlid, to celebrate Prophet Mohamed’s birthday.

The ancient mud and thatch settlement packed with a ton of Swahili architecture is on the southern part of Pate Island around Lamu. The settlement dates back to the middle of the 18 century AD. The Swahili lived here for 600 years until they disappeared at the beginning of the 15th century.

The initial settlement, created near a pit in the dunes 150m away from the sea, was the main enclosure near a well. This well stayed in the same area for some time. The first mosque built with timber was set up on the main enclosure, to serve as a public gathering place.

Building with stones was introduced during the early to the middle of the 10th century, with technology for cutting porites coral from the bottom of the sea. A new mosque built using stone could accommodate most of the male adult population for prayers. Initial stone tombs built using plaster and faced coral are near the mosque.

To Mark Horton, an archeologist all Shanga’s remaining single-story stone houses have walls of lime and coral rag with a thickness of about 0.38 m to 0.45 m. The foundation walls are in a shallow trench with a depth of less than 0.4 m.  Unearthed archeological artifacts show specialization in weaving, leatherworking, and textile working. Shanga town is organized in mitaa (deme according to Horton), portraying the categorization of social classes.

Deme A: Found in the north for farmers using ironworking implements. Fewer stone buildings exist, with the presence of furnaces and iron slag.

Deme B: Found in the east for cattle keepers. Huge stone enclosures (potentially to keep cattle, with heaps of dung) and houses with many rooms make up the biggest part.

Deme C: Found in the south for maritime merchants. Presence of similar stone houses, with some guest rooms. This group is on the settlement’s seaward side.

Deme D: Found in the west for craftsmen. These include mainly stone houses without a standard plan, proposing the adjustment of work studios. The location is full of bead-making apparatus, tanning pits, and spindle whorls.

Mombasa Old Town is a city on the southeast coast of Kenya on the Indian Ocean. With the multiple influences from various societies such as the Arabs, Omanis, Indians, and Portuguese, Mombasa is gradually losing its identity as a Swahili urban center.

Most of Mombasa’s Swahili architecture is with coral stones, readily available on the coast and with low embodied power. Whitewashed facades reflect excessive heat.

Malindi is a location including Mambrui site, Gedi (or Gede) Ruin, Malindi Old Town,  and other settlements, is a critical location with Swahili architecture in the eastern part of Kenya. Gedi’s location includes an enclosed town and its provincial area.

Same as other Swahili cities, all of Malindi’s architecture, such as the palace, houses, and mosques are built using stones. Mud and thatch homes are distributed in open areas across the settlement. Gedi has pillar tombs out of stones

All walls used to be 9 feet high and18 inches thick built with stone with a plaster coating. Apart from working as defensive fortifications, these walls are usually taken to be social barriers in the ancient town. The internal wall has a palace or house for the sheik, two mosques, four large houses, various clustered homes, and four huge pillar tombs with a modern core. The plan for Gedi city seems organized in a grid.

Gedi mosques have washing facilities and wells but were not built with minarets common in the mosques found in other cities utilizing Swahili architecture. Regarding structure, the mosques are built around a central room, with wood beams supporting the roof resting on square pillars of stone. Two eminent mosques in Gedi include a rectangular “Great Mosque” in the inside wall plus another north of the city with walls.

The rest of the houses at Gedi were for the elite in the society, as the biggest part of the population resided in mud thatched houses in the environs. These three-roomed houses have a forecourt with an inner quadrangle. The doorways of these houses have different configurations of their passageways, to optimize space usage. Entrances usually have square archways with framed points.

The sheik’s palace in the town has a huge middle room having two anterooms, both organized around independent courtyards. Two extra courts for reception and guests are accessible through separate gates.

Gedi’s pillar tombs are stone structures constructed on a column or pillar, that are landmark architectures in ancient Swahili cities. Gedi has four huge pillar tombs. The one in the inside wall is the most prominent with an Arabic inscription dated AD 1399.

Songo Mnara is a stone town along the Swahili coast of southern Tanzania. The town was inhabited from the 14th to 16th century and was among the principal commercial cities along the Indian Ocean. Archaeologists discovered 6 mosques, 4 cemeteries, and two dozen housing blocks together with three confined open areas on the island.

Stone Town, Zanzibar, alias Mji Mkongwe (old town in Swahili), is the ancient section of Zanzibar town, the largest city in Zanzibar, Tanzania. The city was among the largest pre-colonial modern cities on the coast of East. It can easily be considered as the epitomy of Swahili architecture.

The location was inhabited by fishermen from as early as the 10th century. During the 16th century, it emerged among Swahili cities, involved in caravan trade and agricultural production. The city developed rapidly in the 19th century under British colonial rule.

Just like the rest of Swahili cities, Zanzibar is split into Mitaa to portray the identities of the residents. Every Mitaa has a common Islamic plan, including a huge mosque in the middle with major streets in four directions away from the location.

Indigenous Swahili used raw materials such as lime, coconut palm, mangrove poles, and coral rag, to elaborate stone buildings with many stories. Geometric designs and plaster decorations are on the doors, walls, doors, and doorways of Swahili elite homes.

The doors in Zanzibar are renowned for reflecting the native Swahili architecture and culture with subsequent impacts from Indians, Arabians, and others. A door includes 7 basic features, like a huge lintel, two panels on the door, and gigantic vertical poles on the side that form a permanent contour.

The modern Swahili architecture have continued to have resemblance in the ancient one especially in the houses of local residences. The book “Swahili port cities: The architecture of elsewhere” gives us deeper insight of both the past and old.