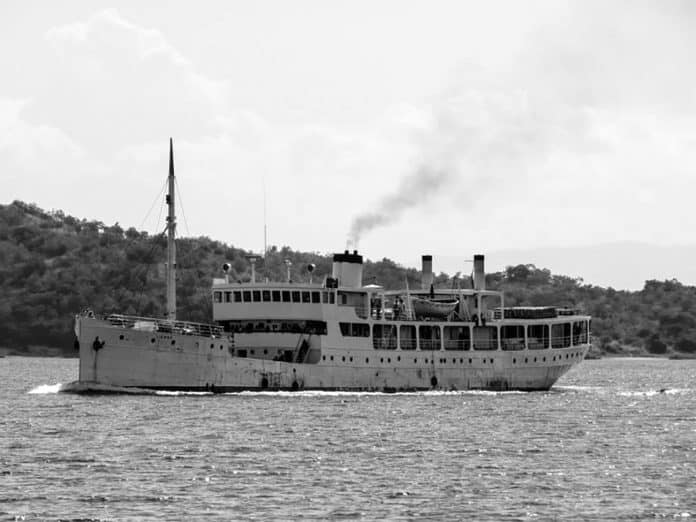 The MV Liemba, originally known as the Graf von Goetzen or Graf Goetzen, is a freight and passenger vessel that operates along Lake Tanganyika‘s eastern shore. Between the ports of Kigoma, Tanzania, and Mpulungu, Zambia, she is sailed by the Tanzanian Marine Services Company Limited, with frequent pauses to take and drop off passengers.

MV Liemba was built in Germany in 1913. It was one of three vessels deployed by the German Empire to dominate Lake Tanganyika during the beginning of WWI (Battle for Lake Tanganyika). During the German retreat from Kigoma, her captain had her scuttled at Katabe Bay on July 26, 1916.

A salvage group of soldiers from the Royal Navy of the United Kingdom raised her in 1924, and she was renamed MV Liemba in 1927. MV Liemba, the German Imperial Navy’s last operating ship, is continuously cruising around the globe.

The German gunship Luisa in, the 1935 novel of C. S. Forester, The African Queen, and John Huston’s film adaptation is thought to be based on MV Liemba.

The vessel was featured in Pole to Pole, the BBC Television travel series, which aired in 1992. In 2010, Breadbox Productions and Indican Pictures released MV Liemba, a documentary about the ship.

Goetzen (the original MV Liemba) was built in 1913 at Meyer-Werft Shipyard located in Papenburg, Germany. It got its name from the ex-governor of German who occupied East Africa, Count Gustav Adolf Graf von Götzen. Goetzen was built in collaboration with the East African Railway Company (meaning Ostafrikanische Eisenbahngesellschaft in German) to function as a passenger and freight ferry.

It was dismantled and delivered in 5000 cartons to Dar es Salaam in German occupied East Africa (modern-day Rwanda, Burundi, and the mainland part of current Tanzania (Tanganyika) after preliminary assembly.

The crates were then transported to Kigoma by Central Line (meaning Mittellandbahn in German) trains.In 1914, she was refurbished there and commissioned on February 5, 1915.

In the beginning, the machinery comprised of 2 round steam boilers for the 2 triple expansion engines, each of which had a power rating of 190 kW (250 indicated horsepower). She also had a ventilation and lighting system, as well as a carbonic ice and chilling unit in an enclosed frozen storage with a capacity of 6.6 lb (3 kg) of ice / hour. The ship was built with a crew of sixty-four men in mind (sixty men and 4 officers).

During the First World War, the Germans renamed Goetzen to SMS Goetzen and transformed it into an auxiliary battleship. They handed her a 4 in (10.5 cm) cannon from the battlecruiser SMS (Seiner Majestät Schiff) Königsberg, which had been decommissioned and destroyed in the Rufiji River by her crew. She also acquired a 3 in (8.8 cm) cannon, one of two transported out from Germany by Königsberg to arm auxiliary battleships if the need arose. Finally, Goetzen’s armament included two 37 millimeter Hotchkiss revolver cannons from the survey ship SMS (Seiner Majestät Schiff) Möwe.

Oberleutnant zur (lieutnant officer) See Siebel was named captain of Goetzen by the Germans. Goetzen initially granted the Germans entire control of Lake Tanganyika under his command. Between Bismarckburg (present day Kasanga, Tanzania) and Kigoma, she carried supplies and soldiers over the lake, freeing troops from a 2-week overland trek and providing a base from which to conduct surprise attacks against the Allied troops. As a result, it became critical for the Allied forces to seize control of the lake.

Spicer-Simson together with the Royal Navy completed the colossal task of transporting 2 armed boats, Toutou and Mimi, from England to the lake by road, rail, and river, through the Belgian Congo. The Brits then launched their 2 boats off the western side of Lake Tanganyika at Albertville (Kalemie). After waiting until the December of 1915, the two warboats launched a surprise offensive against the Germans, seizing the gunboat Kingani, which was renamed HMS Fifi. In February 1916, they capsized a second German warship, the Hedwig von Wissmann, leaving Götzen as the remaining German warship on the lake.

The Allies pushed by land towards Kigoma as a result of their stronger position on the lake, and the Belgians erected an airbase on the west part of Albertville. On the 10th of June, 1916, they employed Short Naval Type 827 airplanes to bomb Goetzen while she sat in Kigoma’s harbour.

The Goetzen was not substantially damaged by the bombing strikes, but she stayed in the harbor. In early May, the Germans had already withdrawn the majority of her guns because they required them somewhere else. Goetzen had just one 37 millimeter Hotchkiss left at the time of the air strike, which she utilized like an anti-aircraft cannon.

By this point, the war on the lake had come to a halt, with both sides refusing to launch attacks. The fight on land, on the other hand, was developing, largely to the benefit of the Allies, who broke off the railway connection in July 1916, thereby isolating Kigoma. This prompted Gustav Zimmer, the German naval officer on the lake, to quit the town and travel south. General Lettow-Vorbeck commanded the scuttling of the Goetzen in order to prevent her from coming into allied hands. The task was handed to three Meyer Werft engineers who had traveled to Lake Tanganyika with the disassembled parts of the ship to supervise its re-assembly. The engineers resolved on their own to try to facilitate a subsequent salvage; they filled the boat with sand and greased all of the engines before carefully capsizing her on July 26th in a depth of 66 feet (20m) near the shores of Katabe Bay (Bangwe Bay according British designation; and Baie de l’éléphant according to Belgian designation) at the position 29°36′12′′East 4°54′5′′South.

In 1918, a Swedish working for Belgium, J. Ludwig Wall, rescued the ship. He had enormous amounts of stuff removed by divers at first. Then he loaded empty barrels into the holds and ran cables beneath the ship to two 375-ton barges that they had been custom-built for the job by “Compagnie des Chemins de fer du Congo Supérieur aux Grands Lacs Africains” and placed on either side of the disaster. The Belgians had managed to raise the ship to her gunwels by wrapping in the cables by the end of June 1919. The Belgians then floated the partially immersed warship to Kigoma in mid-September. She sank to the bottom in water that was 20–23 feet (6–7m) deep. Her superstructure stretched above the lake’s surface since the water was shallow enough. A storm pushed the ship early in 1920, sinking her at Point Lusana in 29°37′21′′East 4°52′15′′South. The ship is not visible in the images taken by H. L. Shantz in Kigoma Bay in February 1920.

Kigoma was taken over by the British in 1921. They didn’t lift the ship again until March 16, 1924. The British discovered that the ship’s boilers and engines were still functional, so they chose to repair it.

Following Lord Baden-Powell’s death on January 7, 1941, Olave, Lady Baden-Powell, his widow, sailed from North of Rhodesia to the north, in the MV Liemba.

After a two-year hiatus, MV Liemba returned to service in 1952.

Since 1927, MV Liemba has been running practically nonstop. The ferry was taken over by EAR&H (East African Railways and Harbours Corporation) in 1948, allowing it to connect with the Central Line from Kigoma to Dar es Salaam. The ship was renovated from 1976 to 1979. The original steam engines were replaced by twin diesel engines at this time. Patrick “Paddy” Dougherty was the main force behind the remodeling. He was born in Downpatrick on March 18, 1918, and worked as an apprentice at Harland & Wolff in Belfast. Following that, he joined the Royal Navy and worked as a ship’s engineer throughout WWII. He worked for the EAR&H, Kisumu, Kenya, as a first engineer, then as chief engineer on Lake Victoria ferries in the 1960s and 1970s. He left Tanzania after completing the reconstruction of MV Liemba.

The EAR&H was disbanded in 1977, and MV Liemba was taken over by the TRC (Tanzania Railways Corporation). The corporation overhauled MV Liemba in 1993, with the help of the Denmark’s shipyard OSK ShipTech A/S and the International Development Agency of Denmark. The deck house, pipes, and the electronic system were all rebuilt, as were the crew and passenger cabins, new MAN engines with 620 horsepower (460 kW) apiece, a hydraulic hoist on the foredeck, and the transformation of the rear freight hull into a passenger cabin (with a capacity increase to 600 commuters). MV Liemba acquired a double floor in the forward baggage compartment to promote security. The boat was re-measured, and the Danish technicians discovered that MV Liemba was 234 feet 3 inches (71.40 meters) long with a 10m beam (32 feet 10 inches). [36] The ship’s upgraded machinery allows it to reach a top speed of 20 km/h; 13 mph (11 knots.)

TRC’s inland transport branch, the Marine Services Co. Ltd, was spun off in 1997.

Following the collapse of longstanding ruler Mobutu Sese Seko in 1997, UN’s High Comm. for Refugees utilized the Motor Vessel Mwongozo and MV Liemba to rescue over 75,000 refugees who’d already left Zaire during Congo War 1. MV Liemba conducted 22 visits between Uvira and Kigoma during the course of the 5-month operation. The UN engaged her in May 2015 to rescue 50,000 people escaping Burundi’s civil war.

The BBC aired, in 2014, a documentary about the ship as part of their “WW1-Beyond the Trenches” series.

Renovation or Replacement of MV Liemba

TRC requested assistance from the German Fed. Govt in either upgrading or replacing the ship in a letter sent in 2011. The German government conducted a research that showed that it would be less expensive to build a new vessel than to rehabilitate MV Liemba. The final appeal for financial assistance came from the govts of Lower Saxony, where the vessel was built, and Berlin, with then-German President C. Wulff noting that the vessel had a “unique history” and provided “indispensable service” to the inhabitants of East Africa.

At 2017, the MV Liemba was in Kigoma for substantial maintenance. Since August 9, 2018, it has been sailing again.

The African Queen, authored by C. S. Forester and made a series in 1934 in the News Chronicle, was a totally different story than the one made by the film Allnut and Rose intend to attack a German battleship called Dortmund (loosely modeled on SMS Königsberg) in the river delta, with the launch going down the river to assault it.

The German gunboat Königin Luise (referred to as Louisa by hero Charlie Allnutt), in the book, is centered on Kingani, a German warship plunged on Tanganyika lake, and the events depicted in the movie are centered on the spectacular naval operation undertaken by the Royal Navy to some extent, but the stories told in the book pale in comparison to the true historical events.

The African Queen, starring Katharine Hepburn and Humphrey Bogart, was based on the book and released in 1951. The gunboat in the film was played by the tugboat Buganda on the Lake Victoria, which was employed for the long range shots. Goetzen or MV Liemba gained some prominence as a result of the film.

Since August 2018, MV Liemba has been operating once a week in each route, between Kigoma and Mpulungu on Wednesdays to Fridays, and back on Fridays to Sundays. The accommodations range from first class (luxury room) through third class (with only seating provisions).

There are ports in Mpulungu, Kasanga, and Kigoma, but passengers must take a smaller boat to go from the ship to the land at other stops. The Karema stop for Mpanda, Lagosa stop for Mahale Mountains National Park), and Kasanga or Kipili stop for Sumbawanga are some of the noteworthy ports along the trip.

To get MV Liemba tickets use the following contact information to the get the most updated prices: