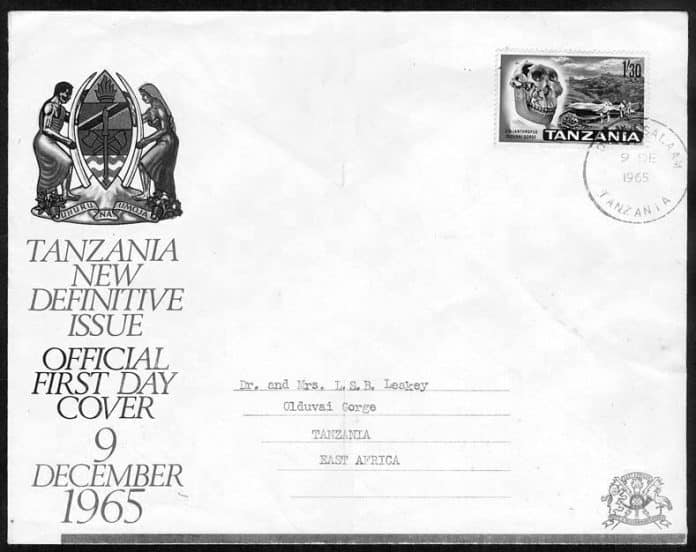 Survey of the Rare Tanganyika Stamps and Postal History

This is a revisit of postage stamps and postal history of Tanganyika during British authority.

with “G.E.A.” (for German East Africa), used in 1921 and 1922. These are very similar to the last ones in German rule in East Africa, but the existence of the “Crown and Writers CA” symbol indicates they were removed after the civilian rule took over from the military, and so eloquently it is considered as the first version of Tanganyika stamps.

The German postal agency was established in Lamu on February 27, 1885. German stamps were used by the agency, and these can only be identified by official marks that were stamped on letters or other postal packages.

The German colony in East Africa was established on October 4, 1890. The colony area included mainland Tanganyika, Burundi and Rwanda. The postal history shows that from October 4, 1890 to June 30, 1893 only German stamps were used in the colony. On July 1, 1893 stamps were issued for the colony.

During the outbreak of World War I, the Germans began to invade Britain in East Africa, Uganda, Congo, Nyasaland, Northern Rhodesia and Mozambique. The attempted British arrival in Tanga between November 2 and 5, 1914 was set back by the Germans. German East African stamps continued to be used in German-controlled territory until their surrender on November 26, 1918.

The colony was broken by the Versailles Treaty. The northwestern region was given to Belgium as Rwanda-Urundi. The Kionga triangle, a small area south of the Rovuma River, was given to Portugal as part of Mozambique. The rest of the area went to England, which ended up being called Tanganyika.

The British seized Mafia Island in January 1915. Initially letters were allowed to be sent without stamps but on January 14, 1915

stamps were put into operation by hand stamping “G.R MAFIA” on German East Africa stamps in two lines. More stamps were added in circulation in May, 1915 by further printing German East African stamps with “G. R. POST 6 CENTS MAFIA” in four lines. Further down in this postal history, as of September, 1915 the East Africa German stamps were hand stamped with a symbol “O.H.B.M.S. Mafia” in a circle. In addition to these, the stamps of the Indian Expeditionary Forces (printed using initials I.E.F.) were also branded as “G. R. POST MAFIA” (September, 1915) or “G. R. Post MAFIA” (October, 1916) in three lines.

The Allied invasion began in March, 1916 from Britain in East Africa, mainly by Indian troops. On May 20, 1916, the Nyasaland-Rhodesia Army began attacking from Nyasaland. In areas occupied by allied troops, a number of civilians were able to send letters through the Indian Postal Service using Indian stamps stamped “I.E.F.”.

Some time in 1914-18, the British created a model of the German boat in East Africa and printed the “G.E.A BRITISH OCCUPATION”.

In 1922 the colony became the British Empire of Tanganyika.

The Nyasaland Rhodesia Regiment, under the command of Brigadier General Edward Northey, launched an attack on East Africa on May 20, 1916. The Northey Regiment crossed into Germany East Africa on May 25, 1916. On May 30 they had captured Neu Langenburg. On June 6 they took over Neu Utengulc. Alt Langenburg was seized on June 13. Ubena was arrested on 30 June.

Soldiers could send ordinary letters without stamps through the post office. If there were any additional postal services required, payment

stamps were not available at any civilian office or for civilian use.

the head of a giraffe, identified in cents, shillings and pounds (100 cents per shilling, 20 cents per pound), and a number of color changes were made in 1925. The changes were made multiple times because there were so many leadership changes, and each leader wanted a different color.

This was followed in 1927 by the second column of 16 stamps in the most common format with the biography of King George V and inscribed “MANDATED TERRITORY OF TANGANYIKA“.

In 1927, Tanganyika entered the Customs Union of Kenya and Uganda, as well as the East African Post Office. Between 1935 and 1963, the postal joint administration (East African Post and Telecommunications Management) stamps marked “Kenya, Uganda, Tanganyika” were in circulation.

Shortly after independence in 1961, the new government of Tanganyika issued a series of commemorative stamps marked “TANGANYIKA”.

This version was later followed by the remembrance issue on December 9th, 1962 which was four stamps that were printed “JAMHURI YA TANGANYIKA” (“Republic of Tanganyika”) as a way to mark the finding of the republic.

The end of Tanganyika as a nation was in year 1964, when it joined the united republic of Zanzibar to create what is now known as Tanzania. East African postal administration stamps (Kenya Uganda Tanganyika stamps) continued to be valid even after the creation of Tanzania

The Indian Post Office was launched in Zanzibar in November, 1868 and closed on April 1, 1869

Dissolution exhibition, used by the Indian post office in Zanzibar from June 1, 1878 to November 10, 1895

German stamps were in circulation via the German postal agent which operated between August 27, 1890 and July 31, 1891.

In 1895 Zanzibar became a British colony.

Zanzibar gained its independence and became an imperial, constitutional empire under the Sultan, Sayyid Jamshid bin Abdullah, on December 10, 1963.

All Zanzibar stamps were removed from the post office from January 1, 1968 and were replaced by Tanzanian stamps. Zanzibar stamps continued to be considered legitimate for usage in Zanzibar for a short period of time.

This was followed by the last edition of the memorial on December 9, 1962, with four stamps inscribed “TANGANYIKA REPUBLIC” (“Republic of Tanganyika”) to commemorate the establishment of the republic.

Tanganyika ceased to exist as a nation in 1964, when it was gradually merged with Zanzibar, to form the nation of Tanzania. East African postal administration stamps remained valid until the creation of Tanzania.

The East African Study Cycle (EASC) was established in 1979 to study, record and publish information related to stamp collection and postal history of Kenya, Uganda and Tanzania and all their predecessors and their implications.

British Occupation of German Colonies, the Provisional Issues of the Postage Stamps of Mafia

by Stuart Rossiter, edited by Edward B Proud, 1982

Identifying the Cancellations of Tanganyika – A Post Office Identification Handbook

by Alan R Drysdall and Kenneth Pennycuick, published by A R Drysdall, 1986, 140pp

The Postal History of Uganda and Zanzibar

The Provisional Issues of the Postage Stamps of Mafia

Zanzibar: 1895-1904 : a comprehensive study of the stamps and postal stationery including the Zanzibar overprints and surcharges on Indian postage stamps … issues from 1896 to the Arms issue of 1904

ARTICLES IN GIBBONS, STAMES PER MONTH

History of the Armed Forces, details of stamps issued, stamp marks used, post office locations as known at the time. The text is based on a collection of authors and two references. (1) The South African Philatelist Stamp Collectors, Volume 10, Number 10, page 146. (2) The Encyclopedia of British Empire Stamps, The Encyclopedia of British Empire Stamps, by Robson Lowe, Volume 2, pages 141, 208 and 209.